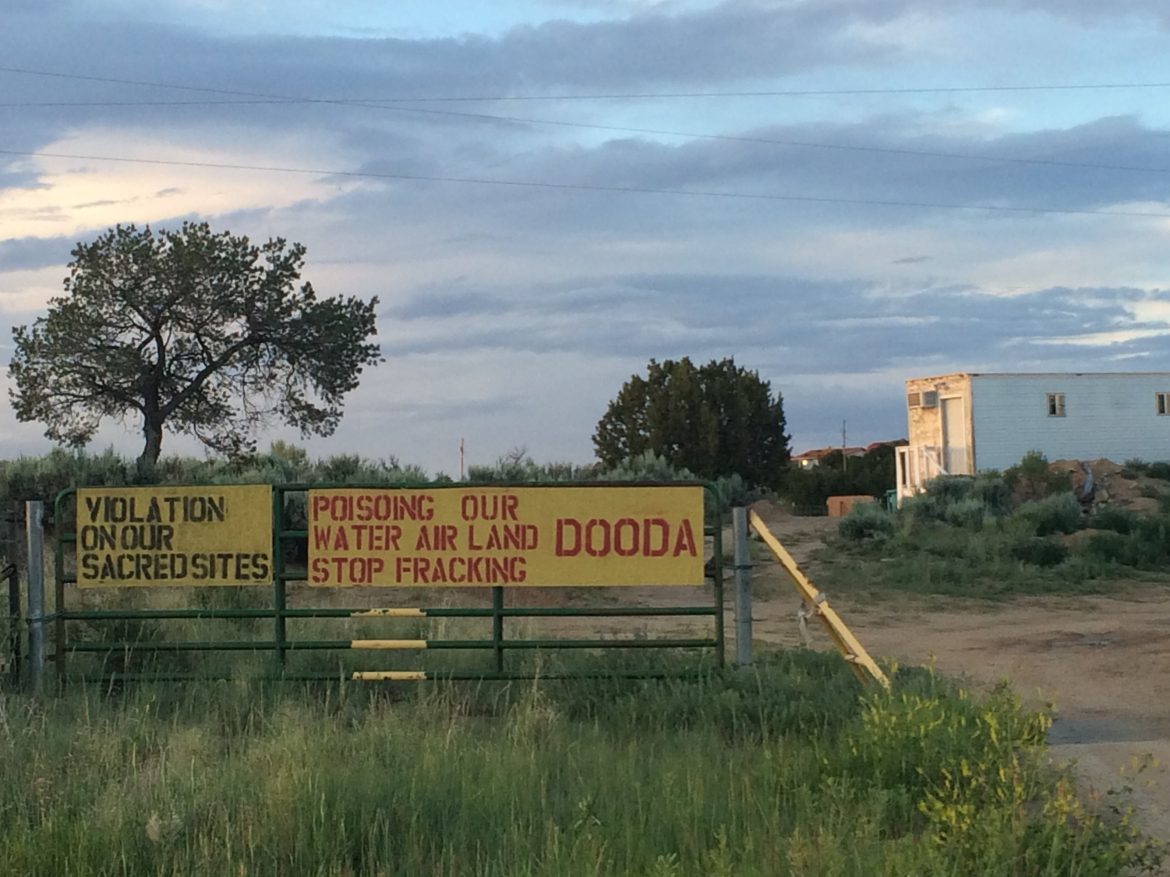 On the eastern edge of the Navajo Nation, some communities oppose increased energy development.

The Dakota Access Pipeline may be 1,000 miles away from the southwest, but issues raised at Standing Rock—related to energy development and Indian lands and rights—resonate here in New Mexico.

“In the case of Standing Rock, I think it sent a very strong message about what we can do, what being involved in a community can do, and the pressure it can put on an agency,” said Theresa Pasqual, an archaeologist and former director of Acoma Pueblo’s Historic Preservation Office who now works as a consultant.

“I hope that here in New Mexico, especially for people that have been following the Standing Rock tribe’s movement to protect its water and to protect its cultural resources, that they will take an interest in what happens here, but also say, ‘What can I do? What can I do to be engaged locally?’” Doing so, she said, can change the “course of conversation” around many of the energy issues that affect New Mexico’s tribes.

Related: The launch of our new environmental beat

Indeed, New Mexico’s tribes have struggled with issues not unlike those raised in Standing Rock for a long time.

Before the drop in oil prices, energy companies increased drilling efforts in northwestern New Mexico, including along the eastern edge of the Navajo Nation and near Chaco Culture National Historic Park. Uranium mining has also been a flashpoint: In 2005, the Navajo Nation tried to block new projects by banning uranium mining from the entire 17 million-acre reservation. And six years ago, five tribes united to protect Mount Taylor from uranium mining.

“Oil, even though the price has decreased, is much like uranium: There’s no guarantee that the price will remain low,” Pasqual said. “All of these moving wheels of resource development are still in play.”

At that time, the U.S. Bureau of Land Management began what’s called a “scoping process” to evaluate the company’s application for the proposed Piñon Pipeline. During the public comment period, the agency received about 30,000 comments.

Recent social media posts raised the profile of the proposed pipeline in wake of the protests at Standing Rock. But according to Victoria Barr, the BLM’s Farmington Field Office district manager, that project is currently on hold due to low oil prices. If they rise again, she explained that the company could ask the agency to pursue the application process again.

But the BLM has not issued a decision, she said. Nor was the proposed pipeline’s route ever finalized.

If the project arises again, Mike Eisenfeld of the San Juan Citizens Alliance wants the agency to analyze the larger impacts it would have on the region. If companies have a way to move up to 50,000 barrels of oil out of the basin each day, it could spur even more drilling.

Based in Farmington, Eisenfeld has been fighting fossil fuel projects for more than a decade. Along with Diné CARE (Citizens Against Ruining Our Environment) and Dooda (“absolutely not”) Desert Rock, the nonprofit fought construction of a 1,500 megawatt coal-fired power plant on the Navajo Nation.

In 2010, plans for the proposed Desert Rock power plant finally crumbled when the company, Sithe Global, again delayed the project and allowed a $3.2 billion industrial bond and tax break from San Juan County, to expire.

“If nothing else for New Mexicans, Standing Rock has been a wake-up call about what all this means,” Eisenfeld said.

Well pads and their associated roads are easily visible from the sky in the San Juan Basin.

Energy companies have drilled in the San Juan Basin for natural gas since the early 20th century. Currently, tens of thousands of natural gas and oil wells exist in that part of New Mexico. The Four Corners region is also home to two large coal-fired power plants, the San Juan Generating Station and the Four Corners Power Plant.

“There are battles here that have been ongoing,” said Eisenfeld. “People in the Albuquerque and Santa Fe areas should know this area has already been leased and drilled to death—and they’re moving south, and they’re going to want more. Communities need to be prepared to push back.”

At an event in Albuquerque last week, environmental groups like the Sierra Club and the Environmental Defense Fund explained to an audience of about 150 people the impacts of methane emissions in the Four Corners on public health, the environment and climate change.

Toward the end of the presentation, Dooda Fracking activists Kim Howe and Lyla June Johnston spoke about the effort by Native youth to protect the landscape around the greater Chaco area and the Navajo Nation from future drilling.

“It’s not ‘doo-da’. It’s pronounced, ‘doe-da,’” laughed Johnson after introducing herself in Navajo and beginning to address the audience, which was predominantly Anglo. “A lot of the youth are beginning to stand up and rise up for our elders.”

And it reinforced the idea that the most effective strategy is a peaceful one, she said.

Pasqual, from the Pueblo of Acoma, knows firsthand how important it can be to change the “course of conversation” around development.

In the years following World War II, uranium mines and mills boomed in western New Mexico because of a demand for the ore, used in nuclear weapons and reactors. The industry busted in the 1980s and the uranium industry left the state. But when the price of uranium began rising in 2002—to a peak of $137 per pound in 2007, the highest it had been in 25 years—the U.S. Forest Service started receiving more proposals for mines.

In 2008, the pueblos of Acoma, Laguna and Zuni, the Navajo Nation and the Hopi Tribe united to try to protect Mount Taylor, an area they consider sacred.

They requested that 400,000 acres on and surrounding Mount Taylor—called Dewankwin Kyaba:chu Yalanee in Zuni—be designated and protected as a “traditional cultural property,” or TCP. Pasqual explained that a TCP designation doesn’t stop development but instead is supposed to give tribes a stronger voice during the decision-making process.

It was historically significant for the five tribes to work together. And many people were reluctant to release a report to the government that detailed their ancestral and spiritual connections with the mountain. Overcoming those cultural taboos, the five tribes took the chance that sharing that information would help protect the area from development.

The state approved that request, making that designation permanent in 2009.

Mining companies, landowners and the Cebolleta Land Grant filed a lawsuit—all the way across the state in southeastern New Mexico’s Fifth Judicial Court in Lea County—to overturn the designation.

The district court ruled in their favor, but in 2014 the New Mexico Supreme Court largely overturned that decision. The TCP designation did not violate due process or state statutes, the justices wrote. But they did uphold the lower court’s ruling that the TCP couldn’t include the land grant.

Proposals for uranium mines still remain, and when the price of uranium rises, the fight to protect the mountain and local water supplies will likely pick up again.

But federal agencies are required to consult with tribes—which are sovereign nations—before making decisions. And just this month, as a result of the protests at Standing Rock, the U.S. Army Corps of Engineers announced it would revise regulations to better conform to consultation requirements under the U.S. Constitution, treaties and regulations.

Pasqual thinks there are other lessons from Standing Rock, where non-Natives listened to and stood in solidarity with the tribe.

“Now that the tribe has received this answer from the Army Corps of Engineers, and now as people transition out of that winter camp and come back into their communities, the question is ‘what do we do with that?’” she asked.

Non-Native people can ask themselves, she said, “where do we take what we learned from that? And how do we apply it in our own communities?”  That could mean educating friends and neighbors, she said, or finding out how to support local tribes.

“Also, as tribal people, the challenge is how do we keep engaged and network with those non-Native allies, and keep our youth engaged in this issue?” she asked.