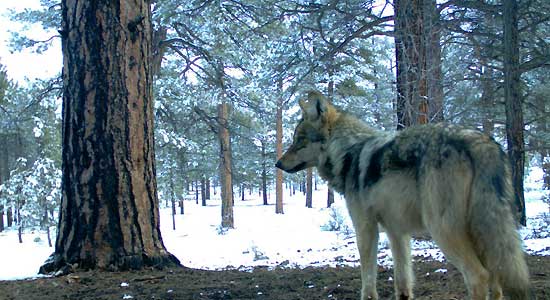 The U.S. Fish and Wildlife Service announced its latest round of funding to help ranchers affected by or living near wolves earlier this month.

Nationwide, the grants amount to $900,000. One-third of that money will go toward projects in Arizona and New Mexico.

The Fish and Wildlife Service’s Wolf Livestock Demonstration Grant Program offers two types of matching, competitive grants to states and tribes. One compensates livestock owners when wolves are proven to have killed their animals. The other helps fund projects to prevent those conflicts from happening in the first place.

The initiative was created through the 2009 Wolf Livestock Loss Mitigation Act, introduced by Sen. Jon Tester, D-Mont. The funding, about a million dollars each year, comes out of the federal agency’s species recovery budget.

Mexican gray wolves were hunted, poisoned and trapped out of existence in the southwestern United States by the 1970s. After about two decades of planning, in 1998 the agency and its state and tribal partners released 11 animals they’d raised in captivity into the Gila National Forest.

By 2015, the number grew to about 100 wolves living within the 4.4 million acre recovery area, which includes parts of New Mexico and Arizona. The population, which was supposed to have reached 100 by 2006, has faced a number of challenges—including from a relatively small number of ranchers and local officials who remain vocally opposed to the wolf reintroduction program.

Meanwhile, some ranchers and landowners are working with biologists and environmental groups to try and reduce conflict between cattle and wolves.

The goal is to support ranchers, their livelihoods and traditions—and also support a self-sustaining wild wolf population. In 2014, the council released a “coexistence plan,” which focuses on solving livestock/wolf conflicts.

“We’re trying to get away from problems associated with post-mortem compensation”—and reimbursing livestock owners for dead sheep or cattle—”and move toward a system that rewards people for success,” said Craig Miller, senior southwest representative with Defenders of Wildlife, and a member of the council.

For 12 years, that non-profit organization managed a program that compensated ranchers for livestock losses due to wolf predation.

“We learned about mid-way through that we should focus attention further upstream,” he said.

Over the past three years, Defenders of Wildlife has spent an average of $100,000 a year in matching funds on incentive programs.

Along with money from the non-profit Mexican Wolf Fund, and in-kind donations from livestock owners, they have leveraged the additional federal money, which is then distributed by states and tribes.

In-kind donations can include things like materials and the use of equipment, horses and vehicles.

“We’ve both got skin in the game,” Miller said, and everyone’s putting forth a “good faith effort to reduce the conflicts.”

Some of the strategies being used and explored include include keeping livestock within electrified fence hung with red flagging (also called “turbo fladry”) that discourages wolves, consolidating livestock during calving season, using range riders, reducing the presence of things like carcasses and afterbirth that attract wolves, using guardian dogs (versus herding dogs) to protect livestock and using scare tools like automated lights and alarms.

When a wolf is proven to have preyed upon livestock, it is “removed” from the wild. Sometimes the animal is killed, while other times the problem wolves are hunted and placed in captivity.

If prevention measures don’t work—or if livestock owners don’t use them—people whose animals are proven to have been killed by wolves can apply for compensation through the Fish and Wildlife Service’s demonstration grant program.

Livestock owners can also apply for payments from the USDA’s Livestock Indemnification Program, which was created by the 2014 Farm Bill.

At the end of 2015, the recovery program estimated there were 97 wolves in Arizona and New Mexico. Updated population information for 2016 will be released in February.

In September, an alpha female from the Sheepherders Baseball Park Pack was found dead.

Correction: An earlier version of the story stated that state and federal agencies are members of the Coexistence Council. They are not members, but rather liaisons.