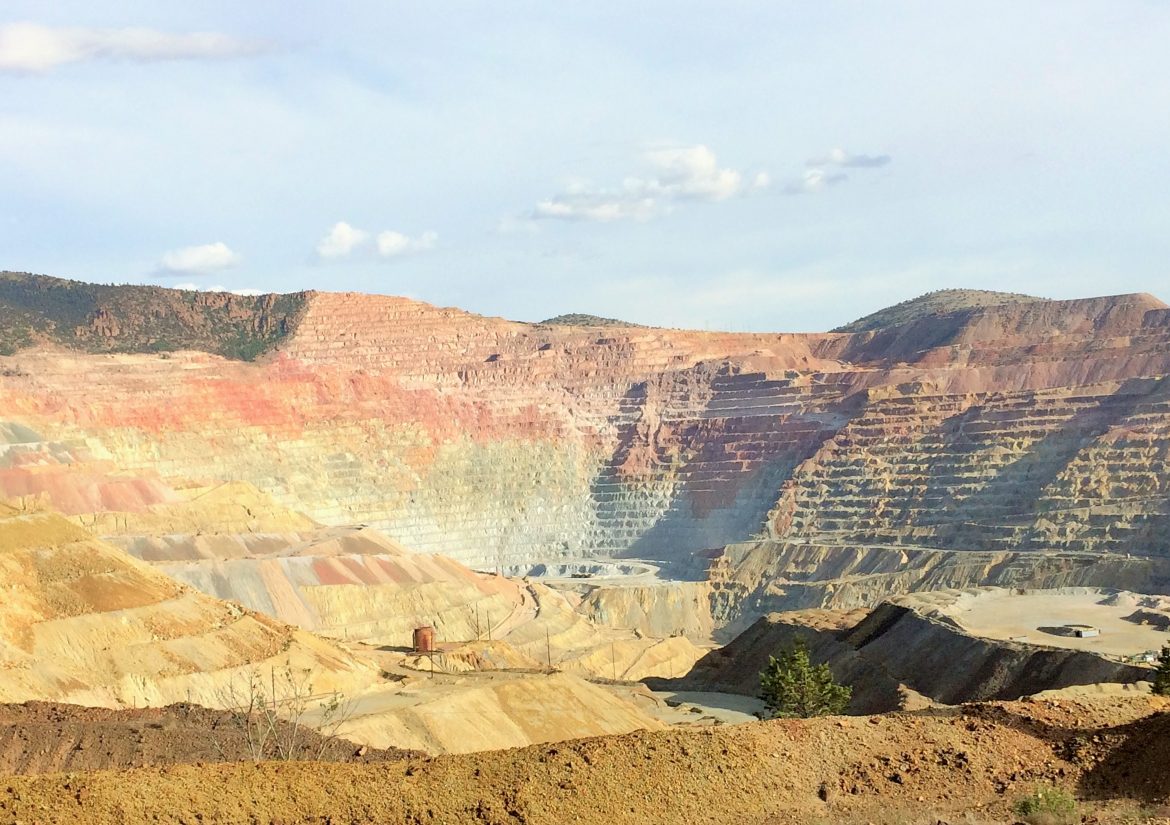 The Chino Mine in southwestern New Mexico was one of the first open-pit copper mines in the world.

The New Mexico Supreme Court heard oral arguments on a rule related to the state’s regulation of groundwater beneath copper mines last fall.

There’s no saying exactly when the court, which heard the case at the end of September, will issue its opinion. But it could be this year.

This comes as the price of copper is on the rise after two years of declines. At the end of last year, the metal rallied—and some analysts expect it to do well in 2017. Analysts say this is due to a number of factors including a rise in demand from China.

After a few rough years, stock prices for the one company currently operating copper mines in New Mexico, Freeport-McMoRan, Inc., also started rising late last year. The mining giant’s stock prices had hit a high in 2008 of $60.67, but plummeted to just over $4 at this time last year. This week, they were nearly $15 per share.

Those on either side of the copper rule argued to convince the five justices on the New Mexico Supreme Court last fall to see things their way.

On one side, attorneys for the New Mexico Environment Department and Freeport stated that the state’s new copper rule, finalized three years ago, adequately protects groundwater resources from pollution from copper mines in southwestern New Mexico.

During oral arguments, one of the state’s attorneys pointed out that the department takes groundwater protection “extremely seriously.” The mining company’s attorney explained that the new rule improves upon past practices.

New Mexico Political Report requested comment from the New Mexico Environment Department, which did not respond. We will update the story if a response is received within a day of this story’s publication.

But opponents of the rule, including the New Mexico Office of the Attorney General and groups represented by the New Mexico Environmental Law Center, say the new rule violates the state’s Water Quality Act by allowing pollution from the mines to exceed pollution standards.

During oral arguments before the Supreme Court, they said that the new rule exempts all open pit copper mines from strict regulations, rather than evaluating each mine on a case-by-case basis, as the state had done in the past.

Opponents also said the rule doesn’t distinguish between groundwater that might never be used by humans—because, for example, it’s directly beneath an open pit mine—and that which could be pumped to supply water to businesses or homes in the future.

Douglas Meiklejohn, executive director of the New Mexico Environmental Law Center, said there are a number of reasons why their fight against the current copper rule is important.

“The rule doesn’t just apply to existing copper mines, it would apply to new copper mines,” he said to NM Political Report this week. “And if new mines are established where groundwater is pristine, it could pollute that groundwater.”

Meiklejohn also doubts the claims that companies can contain the pollution under their mines and facilities.

“Groundwater moves, and the contaminants in it can move,” he said. “We think that it is very unlikely that pollution is just going to be contained under where the mine is.”

Opponents of the rule also fear it could affect other parts of New Mexico, too.

“If the copper mining industry can get a rule that allows it to pollute groundwater, we think it’s likely other industries—gold mines, uranium mines, the Department of Defense or Department of Energy facilities in the state—will want the same treatment,” he said. “The precedent is really horrible.”

The attorney who spearheaded the copper rule case has since left the Office of the Attorney General, but spokesman James Hallinan says the office remains committed to the case.

“Attorney General Balderas is committed to ensuring New Mexico children, families and businesses have access to clean water in order for our state to prosper,” wrote Hallinan in an emailed statement. “We cannot have healthy families, a thriving natural environment or an economy that grows if the quality of our water is jeopardized.”

Another mine in the mix

Meanwhile, another company is trying to re-open a copper mine near the small town of Hillsboro, N.M. That mine operated for just a few months in the early 1980s

In late 2015, the U.S Bureau of Land Management (BLM) released a draft environmental study for the Copper Flat Project, a 2,000-acre project on federal and private land.

THEMAC, and its subsidiary New Mexico Copper Corporation, wants to re-open that mine to produce copper, gold, silver and molybdenum..

According to a 2015 press release from the company, the mine’s reopening would create more than 1,000 jobs, including about 250 direct jobs for operations. The estimated total tax paid over construction and the life of the mine, according to that release, would be $175 million, $53 million of which would go to the state of New Mexico.

But in comments to the BLM last spring, a range of state and federal agencies, agricultural water users, environmental groups and local residents raised concerns about the mine, especially the impact that groundwater pumping could have on the water supplies of the local area and in the Lower Rio Grande.

The New Mexico Department of Agriculture noted in its comments to the BLM that the mine’s pumping of groundwater could affect ranching operations in the area. The New Mexico Pecan Growers wrote that the pumping operations could also affect water rights owned by its members in the Lower Rio Grande. Environmental groups and Turner Ranch Properties—owner of the Ladder Ranch, directly adjacent to the proposed mining property—expressed concerns about mine’s impacts on surface and groundwater, wildlife, the night sky and recreation.

Currently, the water rights the mining company plans to use are also under dispute.

The copper rule issue goes back to 2009, when the New Mexico Legislature directed the state’s Water Quality Control Commission—made up of state employees and gubernatorial appointees—to develop new groundwater rules for the dairy industry and copper mines.

Because the commission doesn’t have its own technical staff, the actual job of writing the rules was handed off to employees of the New Mexico Environment Department (NMED) and its contractors.

For seven months, the copper advisory committee and a technical committee worked on drafting a rule that would regulate groundwater quality and cleanup beneath copper mines.

When that draft was complete, Olson sent it to his bosses at NMED.

Just as the rule was about to go public, NMED’s senior staff made crucial changes that favored earlier requests made by Freeport.

Despite opposition from the environmental and community groups that had participated in the stakeholder process, as well as from the New Mexico Office of the Attorney General, the Water Quality Control Commission finalized that rule in 2013.

Opponents of the new rule sued for it to be overturned. But last year, the New Mexico Court of Appeals sided with the state and upheld the rule.

At that time, NMED’s secretary Ryan Flynn—now the executive director of the New Mexico Oil and Gas Association—praised the decision in a press release, saying the rule was “among the toughest such regulations in the nation,” and replaced an “antiquated system that was inadequate in protecting New Mexico’s precious groundwater resources.”

According to information the New Mexico Mining Association’s Bowen gleaned from Freeport, the company’s mines employ about 1,400 people in Grant County. Bowen added in his emailed statement that the Chino mine is currently operating at full capacity and produced 239 million pounds of copper in the first nine months of 2016.

Meanwhile a drop in copper places curtailed operations at the Tyrone mine, he wrote, and the company is conducting exploratory drilling to possibly extend the lives of both Tyrone and Chino. In addition, he explained that Freeport is moving forward with the state permitting process to restart operations at a fourth mine, Cobre.

Update: This story was updated on the evening of its original publication day to include statements from the New Mexico Mining Association. At that time, the New Mexico Environment Department still had not responded to requests for comment.