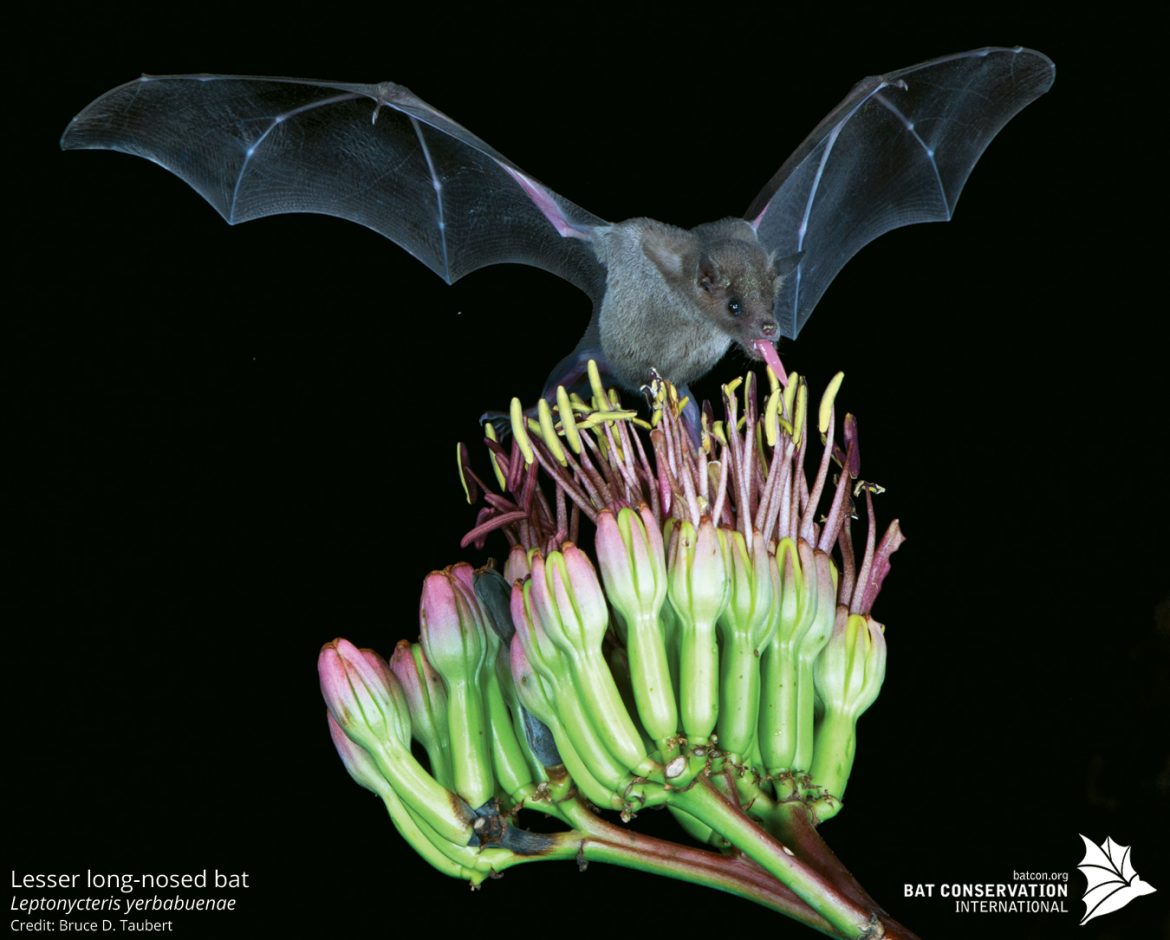 The lesser long-nosed bat is an important pollinator of cacti in the American Southwest.

The U.S. Fish and Wildlife Service says efforts to help a rare bat species were so successful the bat no longer needs federal protection under the Endangered Species Act, or ESA.

The lesser long-nosed bat is migratory, spending summers in southern Arizona and New Mexico and winters in central and southern Mexico.

The Fish and Wildlife Service listed the bat for federal protection in 1988. At the time, scientists knew of only 1,000 individual bats and 14 roosts across their entire range in both the U.S. and Mexico.

Today, according to the Fish and Wildlife Service’s latest study, there are about 200,000 bats and 75 roosts.

Courtesy of Richard Spitzer, via USFWS

The agency attributes the bat’s boost in population to cross-border efforts.

In the U.S., most roosts are on lands managed by federal agencies such as the U.S. Forest Service, National Park Service, the U.S. Bureau of Land Management and the Army’s Fort Huachuca.

According to the Fish and Wildlife Service’s press release, their protection has been incorporated into land use and resource management plans. Working alongside states, federal agencies have also installed bat gates to keep humans from harming roosts or spreading diseases to the bats.

Mexico removed the lesser long-nosed bat from protection on its endangered species list in 2015.

The lesser long-nosed bat population in New Mexico is limited to the far southwestern corner of the state, including the Peloncillo Mountains on the border of Arizona and the Animas Mountains in Hidalgo County. According to the Fish and Wildlife Service’s December 2016 assessment report, less is known about populations and roosts in New Mexico than in other parts of its range.

According to that same report, lesser long-nosed bats regularly find and use hummingbird feeders:

Some hypothesize that the year-round presence of hummingbird feeders in southern Arizona and New Mexico support lesser long-nosed bats staying later in the year in these areas, perhaps even year-round. It is possible that this extra availability of forage resources may be one factor that has led to the lesser long-nosed bat’s increased stability and progress towards recovery. The increase and permanent presence of hummingbird feeders at homes in southern Arizona and New Mexico may supply a consistent forage resource for these nectar-feeding bats that allows them to use and remain in areas when natural forage resources are absent or reduced (R. Sharp, pers. comm. to R. Medellín). Alternatively, the long-term effects of staying longer before migrating southward and the questionable nutritional value of the sugar water in the hummingbird feeders are unknown and could actually be detrimental. More study related to these issues is needed.

As required by law, the federal agency is accepting public comment on its plans to remove the bat from protection under the Endangered Species Act.