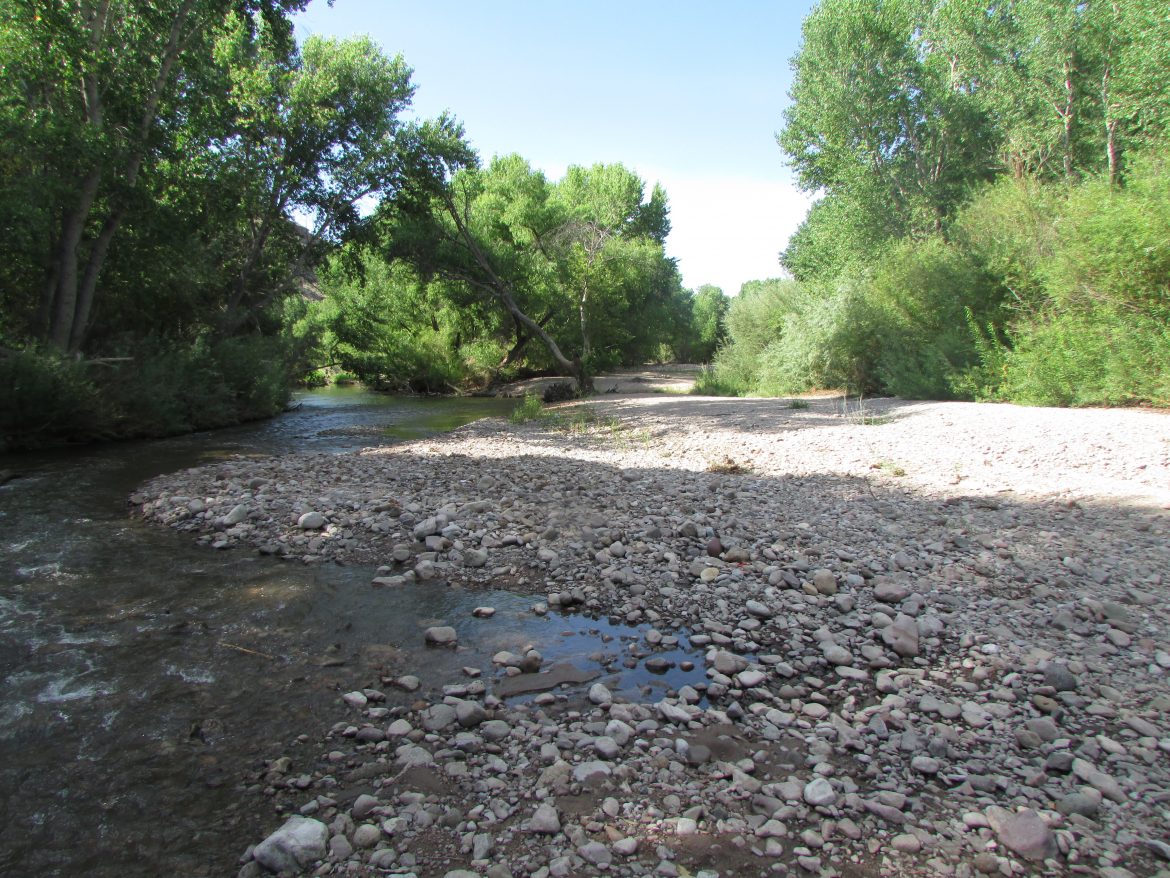 The Gila River near the proposed diversion site.

A one-sentence provision in state law is emboldening at least one agency to keep public information from seeing the light of day. All officials have to do is accuse someone of having a political agenda.

For more than a year, retired Interstate Stream Commission director Norman Gaume has wanted to know how much water farmers and others currently draw from the Gila River. That’s where the state plans to build a controversial new project that would divert more water from the river.

Specifically, he wondered if water users are using the maximum amount of water they’re already allotted from the river.

In December, Gaume filed a public records request to look at ISC reports that show how much water is diverted from and used along the Gila and its tributaries each year. He wanted to see if the on-the-ground data supports assertions by his former agency that farmers were already using all the water they could—and still needed more.

The ISC, a public body, includes nine members who are appointed by the governor. The ISC also employs staff members such as hydrologists, engineers, attorneys and water experts.

While looking through the bound 2015 report at the ISC’s office in Santa Fe late last year, Gaume read through its printed Excel spreadsheet tables.

According to him, those tables contained the information he had been seeking for the past year but had been unable to find—in part because he was having a hard time “making sense of voluminous ISC public records produced as hard copies.”

Gaume asked for an unlocked copy of the Excel spreadsheet.

With an unlocked copy—instead of a locked copy or a PDF—users can examine the formulas and original data that is used to reach conclusions or achieve results.

In its response to his request, the ISC categorized the spreadsheet as a “database.”

In order to inspect that database, the public records custodian, paralegal and attorney each told Gaume he’d have to sign the agency’s database agreement.

That agreement prohibits the requester from making copies or providing the database to anyone without the ISC’s written approval. It also says the database can’t be used for any “political or commercial purpose” without the agency’s approval.

The state statute under which Gaume requested the documents, known as the Inspection of Public Records Act (IPRA), says that the “use of state agency databases for commercial, political or solicitation purposes is restricted.”

Gaume proposed making changes to the three-page agreement the ISC wanted him to sign.

Rather than not providing copies of the ISC’s spreadsheet to anyone, he wrote that he would list the names of those with whom he was sharing it. He also added a note that “advocacy use” of the database was not “political.”

According to Gaume, the agency refused his suggestions.

The ISC did not respond to a request for comment or information for this story. Because state offices were closed Friday, we will update this story if the agency responds within 24 hours of publication.

For Gaume, it was a familiar scenario. Since 2014, he has been an outspoken critic of his former agency and has opposed the state’s plans to build a diversion on the Gila River.

“Twice before the ISC has refused to give me a spreadsheet,” Gaume said last week. Both times, he was trying to see how staff had achieved the results presented to the commission and the public.

In both those earlier instances, once he finally had unlocked versions of the spreadsheets, he revealed problems with the state’s plans on the Gila.

In the next few months, the state is supposed to start studying the environmental impacts the proposed Gila River diversion might have.

Thanks to a water trade passed by Congress in 2004, the state of New Mexico had 10 years to decide how it would use federal money to meet water needs in four rural counties in southwestern New Mexico. The state could pursue efficiency and restoration projects, or receive a larger subsidy and build a diversion on the Gila River.

In November 2014, the Interstate Stream Commission voted to pursue the more expensive option, the diversion.

Since then, the ISC and a newly formed group, the New Mexico Central Arizona Project Entity, have struggled to come up with solid plans. Numerous costly proposals have been floated, including some that Gaume and others criticized for including “fatally flawed” design and engineering plans.

The state has yet to explain who will use water from the diversion, how much users will pay for the water, or how much water the river can actually yield, especially as the region continues to warm.

Meanwhile, New Mexico continues to spend millions of dollars of the federal subsidy on contractors, attorneys and studies.

The politics of advocacy

According to New Mexico Foundation for Open Government executive director Peter St. Cyr, requiring someone to sign a release saying a database won’t be used for “political purposes” is a violation of that person’s civil rights under the First Amendment.

“The fact is that a citizen can redress their government anytime they want,” he said. “Those are fundamental rights we have as citizens in a democracy.”

He added that the agreement to not use information for political reasons seems to show public officials don’t want to be scrutinized.

In the case of Gaume’s most recent request for a spreadsheet, St. Cyr noted that similar issues have come up in the past—and been resolved.

“We shouldn’t have to continue to fight these battles over and over and over again,” he said. “Government employees should always comply with New Mexico’s sunshine laws and provide documents on request, rather than looking for ways to shield them from the public.”

Susan Boe, a retired attorney who preceded St. Cyr as executive director of NMFOG, spent much of her tenure at the government transparency group trying to get the ISC to release documents.

Last week, she recalled the agency’s resistance to releasing spreadsheets to Gaume in the past.

In late 2014, for instance, Gaume had requested an unlocked spreadsheet related to the flows of the Gila River. When the agency wouldn’t release it, NMFOG filed a “mirror request” for the same spreadsheet.

Boe said she was invited to the ISC office in Santa Fe, where staff projected information onto a screen but wouldn’t unlock the data. To receive the unlocked spreadsheet, Boe would have to sign the agreement barring her from sharing it. She refused.

Eventually, the ISC posted the unlocked spreadsheet on its website. When Gaume and other analysts identified and corrected errors in it, they learned that the Gila River doesn’t yield as much water as the ISC previously said. They found that New Mexico’s “new” legal water rights granted by Congress in 2004—14,000 acre feet per year—exceed what the river can actually yield.

“In the case of the ISC, we’ve got them in recording and on paper, two years ago, saying ‘We know you’re going to use this for political purposes,” she said. “Well, I couldn’t tell you if [Gaume is] a Democrat or a Republican, but if ‘political’ means ‘against the Gila River diversion,’ that’s very problematic.”

She also doesn’t think the prohibition on using the data for “political purposes” is constitutional—especially if an agency does not refer to political parties, but is instead identifying someone as having an opinion contrary to the agency’s official line.

“The second thing is we don’t believe that an Excel spreadsheet is a ‘database,’” Boe said.

The proposed diversion would be built just upstream of this stretch of the Gila River.

Boe noted that the agency didn’t release the unlocked spreadsheet until after ISC staff had presented faulty data to the commission and the public. “By releasing it at a pretty late date, it precluded people who are experts in these flowcharts from looking at them and raising the necessary red flags,” she said.

NM Political Report reached out to the New Mexico Office of the Attorney General, seeking an interview with one of its experts on IPRA compliance. That office, currently headed by Attorney General Hector Balderas, is charged with enforcing compliance with IPRA and the state’s Open Meetings Act.

That interview was canceled minutes before it was set to occur.

But in an email, spokesman James Hallinan wrote that Balderas’s office has not received any complaints, from Gaume or anyone else, regarding the database provision of IPRA or its applications.

Were the office to receive any such complaint, Hallinan wrote, it would be reviewed.