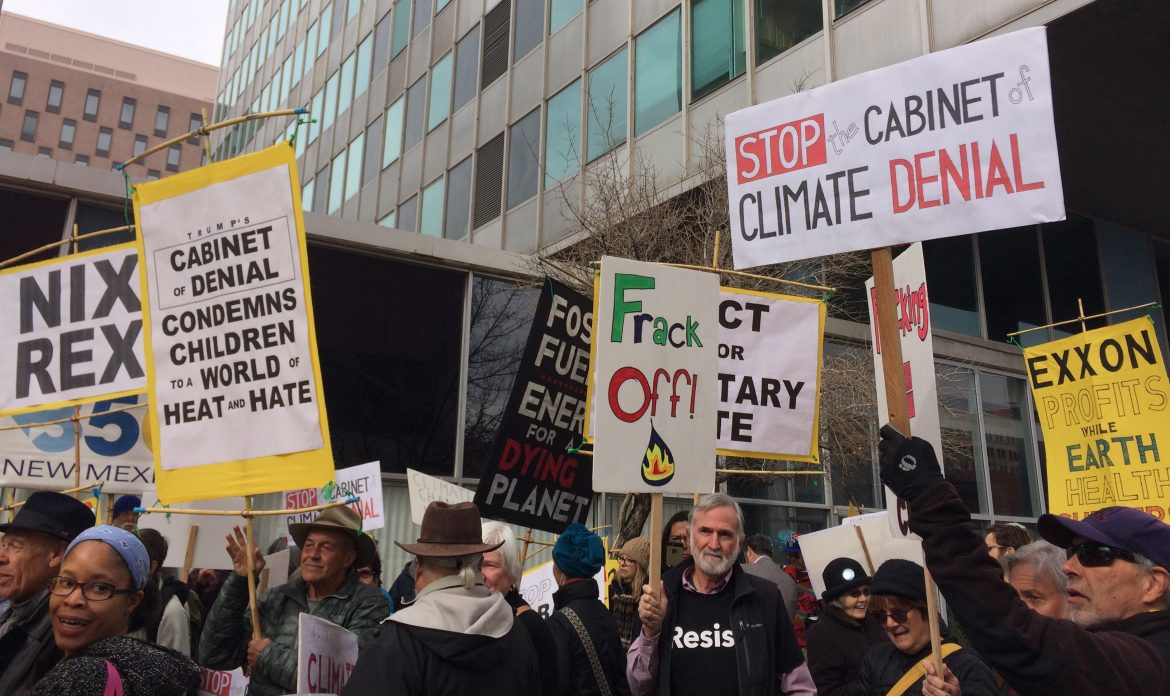 At a rally in Albuquerque on Monday, protesters called on New Mexico's senators to reject four of Trump's cabinet picks.

Rallying outside the offices of Democratic Sens. Tom Udall and Martin Heinrich, protesters called on the two lawmakers to oppose the confirmations of ExxonMobil CEO Rex Tillerson as Secretary of State, Oklahoma Attorney General Scott Pruitt as Administrator of the Environmental Protection Agency, former Governor of Texas Rick Perry as head of the Department of Energy and Montana congressman Ryan Zinke as Secretary of the Department of the Interior.

Organized by 350.org, a nonprofit organization focused on cutting greenhouse gas emissions enough to avert the worst impacts of climate change, the rally in Albuquerque was related to national protests organized across the United States.

Udall’s State Director Greg Bloom delivered a message to the crowd from the senator.

Calling global warming “one of the greatest threats to public health, our environment, the economy and our national security,” Udall pointed out that New Mexico is right in the “bull’s eye.”

In the statement, Udall reiterated his support for the agreement countries hammered out in 2015 to cut emissions globally, as well as of the Clean Power Plan and new rules from the EPA and the U.S. Bureau of Land Management to cut methane emissions from oil and gas drilling.

Udall also pointed out that the science on human-caused climate change is clear.

According to Udall’s statement, New Mexico’s priorities should include developing a statewide climate change action plan, cutting methane emissions in the Four Corners and increasing the use of renewable energy.

Leaders from 350.org, Food and Water Watch, the Rio Grande Chapter of the Sierra Club and Power through Peace each spoke about the threats to natural resources and communities from climate change.

“Trump’s cabinet is going to be terrible and it needs to be opposed,” said Greg Mello, director of the Los Alamos Study Group, another speaker at the rally. “That’s a given.”

But Mello cautioned against framing climate change as a partisan issue.

“We have to be unafraid to step on toes, and that includes Democratic Party toes,” he said, adding later that people who are concerned about climate change “have to hold Democrats to something beyond the vague aspirational statements we get from them.”