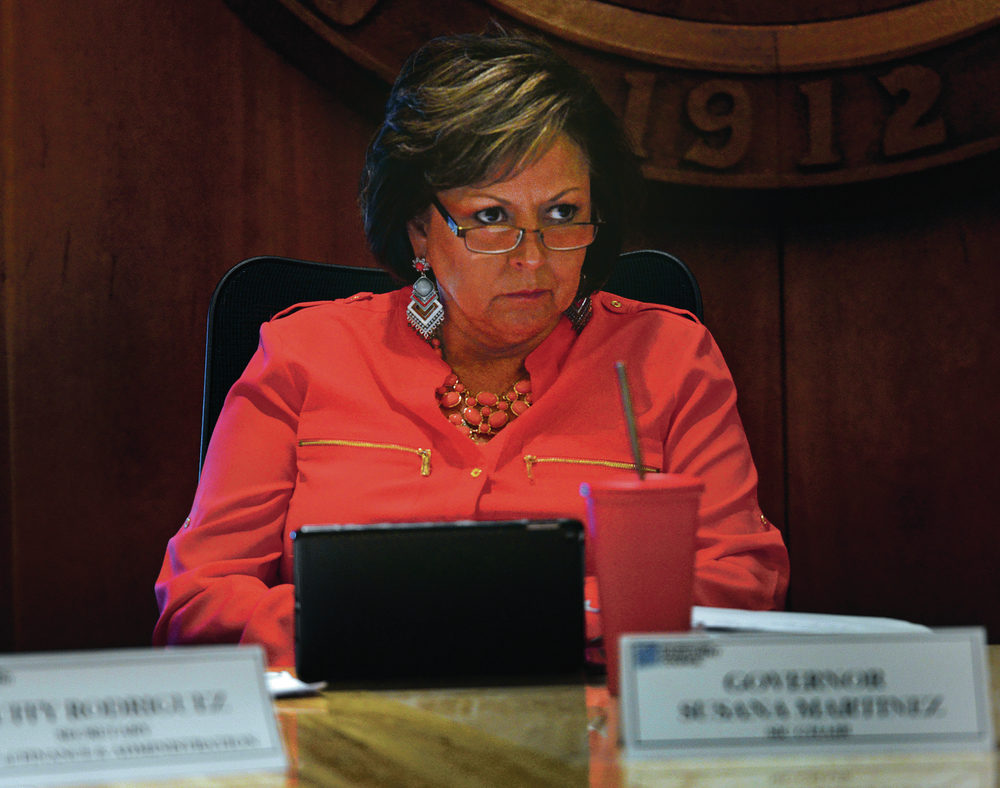 Time is running out for Gov. Susana Martinez, pictured in September during a State Investment Council meeting at the Capitol, to accomplish some positive change. The legislative session that begins Tuesday will be her last 60-day session.

As New Mexico lawmakers prepare to convene for the 2017 legislative session — Gov. Susana Martinez’s final 60-day session — probably the most common words spoken at the Roundhouse by legislators, staff, lobbyists, reporters and other Capitol regulars are some version of “Here we go again.”

Another session. Another budget crisis. More partisan head-knocking. More harsh rhetoric. We’ve seen it before, and most people who follow the state’s legislative process believe we’re about to see it again.

But this isn’t just any session. Since next year’s 30-day session will be focused mainly on the budget, this is the last real chance for Republican Martinez — who can’t legally run for a third term — to establish her legacy, to accomplish some positive changes that will lift New Mexico out of its financial doldrums and get the state’s economy off the ropes.

Nobody thinks that’s going to be easy.

The governor’s critics can — and frequently do — rattle off an entire litany of discouraging statistics.

New Mexico has the second-highest unemployment rate in the country. For three years in row, the state has ranked 49th out of 50 states for child well-being, according to the Annie E. Casey Foundation’s 2016 Kids Count report. Public school students in New Mexico have the poorest chance for success among students nationwide, according to a recently released report by Education Week magazine. For two years running, 24/7 Wall St., a national online financial publication, has named New Mexico the worst-run state in the nation.

“It’s disappointing,” said Rep. Bill McCamley, D-Las Cruces, when asked last week about Martinez’s probable legacy as governor. “Her entire focus has been on crime and punishment instead of creating new jobs. And the results are obvious. … This state has a deficit of hope.”

Still, Democratic leaders in the Legislature, in interviews last week, expressed optimism — if cautious optimism — that Martinez and lawmakers can come together and create meaningful legislation aimed at improving the economy and seriously tackle the lingering unemployment problem.

If this indeed becomes a tradition, it would be something new for Martinez, who for years has seemed to wall herself off from critics.

Wirth said his December meeting was only the third time he’s met with Martinez in the six years she’s been governor.

A spokesman for Martinez, asked about the upcoming session, said in a statement Friday, “The governor’s core priorities remain: balance the budget in a responsible manner; reform education; preserve economic development initiatives; and crack down on repeat offenders.”

These initiatives sound very similar to those pushed by Martinez in past legislative sessions since she became governor in 2011.

Although the Democrats may have seemed conciliatory about working with Martinez, some comments by spokesman Michael Lonergan sounded like Martinez was ready to do battle with lawmakers. A budget proposed by the Legislative Finance Committee “would gut classroom spending and programs that help struggling kids learn. In addition, it would raise taxes on food, groceries and medicine,” he said in the statement.

Lonergan listed several other Martinez priorities for the session, including the forced retention of third-graders who can’t pass reading tests, a measure that has stalled in the Legislature year after year; reinstating the death penalty for people who kill children, police or corrections officers; and strengthening the “three-strikes” law to keep more violent criminals in prison.

Some lawmakers fear the session will devolve into the same, old ideological stalemate over issues that have been argued for the past six years.

Sen. Carlos Cisneros, D-Questa, said last week he believes the governor when she says she’d veto any revenue increase — or even cutting existing tax exemptions and loopholes for corporations, which Martinez has said would be the same as tax hikes.

“We really need to do this, but she’s taken that pledge,” Cisneros said, referring to the “Taxpayer Protection Pledge” by the advocacy group Americans for Tax Reform, which has been signed by hundreds of mostly Republican Congress members and state officials across the country.

Of course, Democrats tend to be much harder on the governor than Republicans.

Republican Senate Minority Leader Stuart Ingle of Portales said Friday that despite low rankings in education, Martinez deserves credit for improving education by calling attention to the importance of reading — even though her bill to hold back struggling third-graders has failed to pass. Ingle also said he believes high school graduation rates in the state will continue to show improvement.

In past sessions, it seemed Martinez and her House Republican allies were focused on divisive wedge issues — stopping undocumented workers from getting driver’s licenses, stopping unions from getting fees from workers who aren’t members and imposing harsher punishments for criminals — than improving the economy. Some of these bills seemed more geared toward creating campaign attack ads than actually advancing policy.

Martinez’s 2013 session was somewhat different. In the final hours of that session, the administration, working with some legislative leaders on both sides of the aisle, cobbled together a massive tax-cut bill that was made up of several pieces of legislation that had stalled in the session. The major component was a cut in corporate taxes that Martinez wanted as a way to bring in new businesses, improve job growth and boost the economy. After passing the Senate on the last day of the session, the bill passed the House in the last minute — literally — on a 46-18 vote.

The process of that tax bill was controversial, with many lawmakers complaining they hadn’t seen the complex and multipart bill until moments before the vote. In the four years that have followed, even Democrats who supported the tax package have expressed disappointment that the legislation has yet to make a dent in the state’s unemployment statistics.

But Lonergan pointed to several companies that have opened new facilities or expanded operations in the state since 2013, including Facebook, Safelite AutoGlass, Fidelity Investments and Keter Plastic.

“The governor has already spoken to the incoming leaders of both chambers, and she’s looking forward to working with both parties and chambers, as she has done since taking office, to make New Mexico a better place,” Lonergan said.