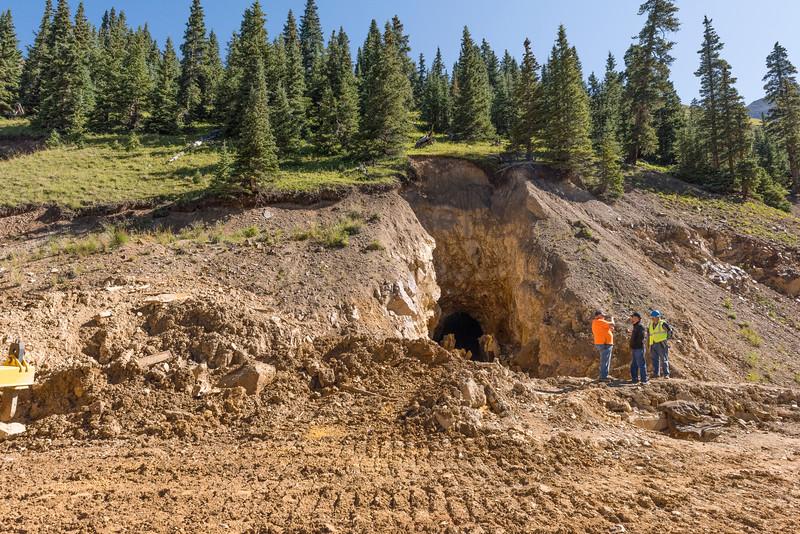 The Gold King Mine entrance area is shown on August 14, 2015

The big environment story last week was an announcement from the U.S. Environmental Protection Agency saying that it can’t pay claims of more than a billion dollars in economic damages caused by the 2015 Gold King Mine spill.

As the AP reported on Friday:

A total of 73 claims were filed, some by farmers who lost crops or had to haul water because rivers polluted by the spill were temporarily unusable for irrigation and livestock. Rafting companies and their employees sought lost income and wages because they couldn’t take visitors on river trips. Some homeowners sought damages because, they said, their wells were affected.

New Mexico Democrats, U.S. Sens. Tom Udall and Martin Heinrich and U.S. Rep. Ben Ray Luján, lashed out at the agency. And so did some Republicans, including New Mexico Gov. Susana Martinez.

According to the AP story:

“I can guarantee you that if a private company had caused this massive environmental disaster, the EPA would have gone all-out to hold them accountable,” Martinez said in a written statement.

“But when the federal government dumps millions of gallons of toxic sludge into our rivers, they shirk their responsibility and leave it up to the states to mop up the mess they created,” she said.

While conducting exploratory cleanup work, EPA-hired contractors caused 3 million gallons of wastewater to spill from the Gold King Mine. The mine, like hundreds of others in the area, was owned by a private company before being abandoned.

In a statement, the EPA said that those who have already filed claims, and whose claims have been denied, have six months to challenge the decision in U.S. District Court.

Late last year, a tanker truck driver slid off the road near Eagle Nest, crashing into the frozen Cimarron River. The accident caused about 600 gallons of diesel fuel and hundreds of gallons more of gasoline to leak in the river. The Fronk Oil Company driver was cited by state police for reckless driving.

Last week, the Santa Fe New Mexican reported that the accident killed 300 fish and at least one beaver. According to that story:

“It is pretty toxic over there,” Eric Frey, a sport fish program manager at the New Mexico Department of Game and Fish, told the Game Commission. “You can really smell the diesel.”

The diesel fuel and gas were largely contained by beaver dams, Frey said, killing all fish and aquatic bugs over a span of about 300 yards.

Later this month, the U.S. Bureau of Land Management will auction off more than 800 oil and gas leases in northwestern New Mexico.

A coalition of environmental and tribal groups has opposed increased drilling in the area, which already is home to thousands of natural gas wells and about 100 new oil wells.

Court challenges to the leases have delayed the sale three times already. The coalition says the agency hasn’t adequately studied the impacts of increased drilling in the area. Chaco Culture National Historic Park, as well as related archaeological sites are nearby, as well as the Diné communities of Counselor and Nageezi.

The leases up for sale are outside a ten-mile buffer area surrounding the national park. But opponents have asked the agency to cancel the lease sale entirely.

More information on the leases and sale can be found on the BLM’s website.

That’s according to a recent story in the Albuquerque Journal, in which Gregg Fulfer, former Lea County commissioner and owner of the Fulfer Oil and Cattle Co. in Jal, pointed out small companies need at least $60 per barrel to be profitable:

“We’ve gotten some breathing room with prices up a bit,” said Fulfer. “Activity by the bigger producers is picking up and the service companies are hiring people back. But small companies like mine really need about $65 a barrel to make a profit and reinvest back into production, otherwise we’re still just treading water.”

If foreign producers do comply with cutbacks, oil prices could climb above $60 quite rapidly, potentially fueling a new boom in the Permian Basin, where some of the nation’s best producing wells are located, said Daniel Fine, associate director of the New Mexico Center for Energy Policy at New Mexico Tech in Socorro. In fact, full industry recovery could propel southeast New Mexico and West Texas into the nation’s premier oil-producing zone, since the industry is only just beginning to crack open the vast production potential of shale rock formations there.

Last week, the editor of El Defensor Chieftain gave readers an update on a private company’s proposal to pump millions of gallons of water a day from wells in the Plains of San Augustine west of Socorro to the Rio Grande.

As Scott Turner notes in his piece, the New Mexico Office of the State Engineer had previously rejected the company’s application because it was “speculative and incomplete.” But, wrote Turner, “State Engineer Tom Blaine told the San Augustin Plains Water Coalition last spring that this permit stood a good chance of being approved.”

Opponents of the plan include environmental groups, local residents and ranchers, Catron and Socorro counties, the City of Socorro and the Village of Magdalena.