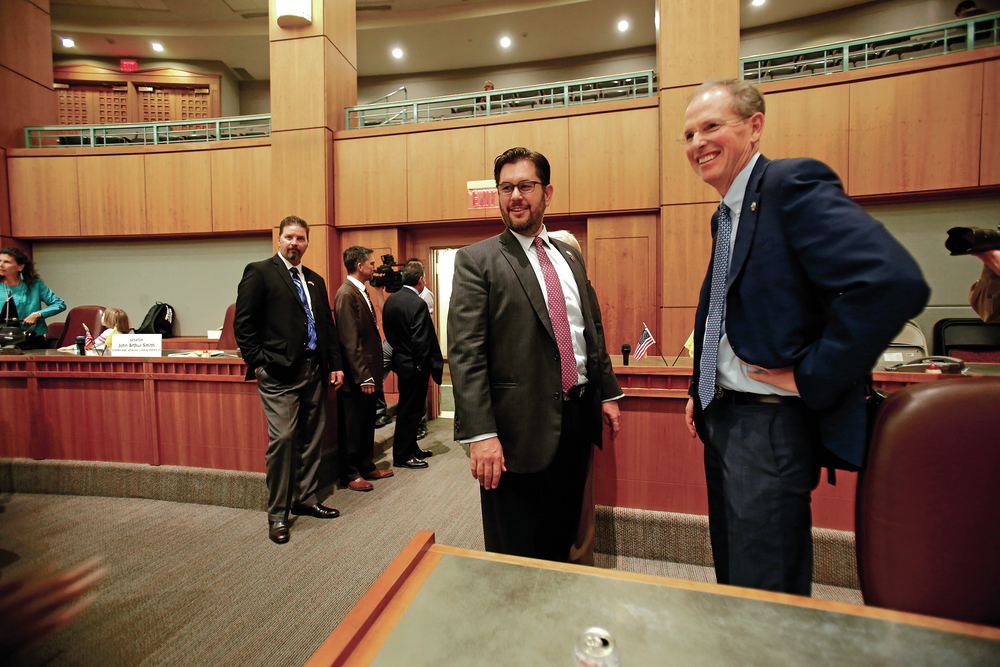 State Rep. Brian Egolf, D-Santa Fe, left, and Sen. Peter Wirth, D-Santa Fe, shown during the last day of the 2016 special legislative session, are about to take on the most powerful positions in the Legislature when lawmakers convene for the 2017 session on Tuesday.

Santa Fe is about to become the most powerful city in the Legislature.

Presumptive House Speaker Brian Egolf and new Senate Majority Leader Peter Wirth both are Santa Fe Democrats, Anglo lawyers from the city’s east side. When Wirth was elected to the Senate in 2008, Egolf was elected to represent Wirth’s old district in the House of Representatives.

Both have strong liberal voting records and both have chaired the committees that deal with the environment and energy in their respective chambers. Conservation Voters New Mexico, which for years has maintained scorecards for lawmakers, gives Egolf a 98 percent lifetime rating. Wirth’s lifetime score is 99 percent.

And both were thrust to power after last November’s general election. Egolf, who had served as minority floor leader for the past two years, was in line for the speaker’s position after Democrats wrested control of the House from Republicans, who were in the majority for only two years. A vacancy for the Senate majority leader opened up after Wirth’s predecessor, Sen. Michael Sanchez, D-Belen, lost his re-election campaign.

Despite these similarities, there are some real differences between the two leaders in style and temperament.

Wirth, 55 is a tax-policy wonk, who is measured in his comments, conciliatory in demeanor. He’s cultivated friendships among his Republican colleagues and has thrived in a Senate where debates are less harsh and both sides take pride in bipartisanship.

Egolf, just 40, is much more aggressive, even combative. He was directly involved in recruiting Democratic House candidates and other aspects of last year’s successful campaign to oust the Republicans. And while not as strident as some of his fellow Democrats in the House, as minority leader he became the face of the opposition to the ruling GOP in that chamber. Egolf tried, mostly unsuccessfully, to offer alternatives to controversial Republican bills, even when he knew his side didn’t have the votes.

In an interview last week, Wirth said some of the differences between Egolf and himself have to do with the nature of the two different chambers that they’ll be leading.

“The Senate has a real collaborative approach between Democrats and Republicans. It’s one thing I believe in and one reason why I continue to serve. You have Democrats and Republicans willing to not only talk to each other, but to work together to do what’s in the best interest of the state,” Wirth said. “We worked very hard during [last year’s special session] to do this heavy lifting together.” New Mexico was in budget deficit when lawmakers assembled for the special session.

Indeed, the Senate and House Republican leaders have similar differences. House Minority Leader Nate Gentry, 41, of Albuquerque is far more aggressive in his style than the laid-back, affable Senate Minority Stuart Ingle, 69, a Portales farmer who has served in the Senate since 1985.

Also in a top leadership position is Senate President Pro-tem Mary Kay Papen, D-Las Cruces, who initially was elected to that post with the help of Republicans. No challengers to Papen, 84, have emerged this year.

Though disagreement on some issues is inevitable, Wirth said, “It’s really important to me to continue to have the Senate function as a collaborative body and to do so respectfully.”

Egolf said that he’s long admired Wirth’s deliberate manner and his knack for being a good listener.

He said that being minority floor leader the last two years, “I saw that being combative didn’t serve me or anybody.” He said beginning in last year’s regular session, “I worked to maintain a more respectful tone and not be as aggressive.”

Egolf and other House leaders recently conducted a tour of cities in southern and eastern New Mexico — rural areas that in recent years haven’t elected many Democrats — to talk to residents about their ideas to bring more jobs to their communities. “I invited Republican legislators to those meetings and they showed up,” Egolf said. “I’m trying to take a more bipartisan approach. I think you’re going to see some good bipartisan legislation come out of this.”