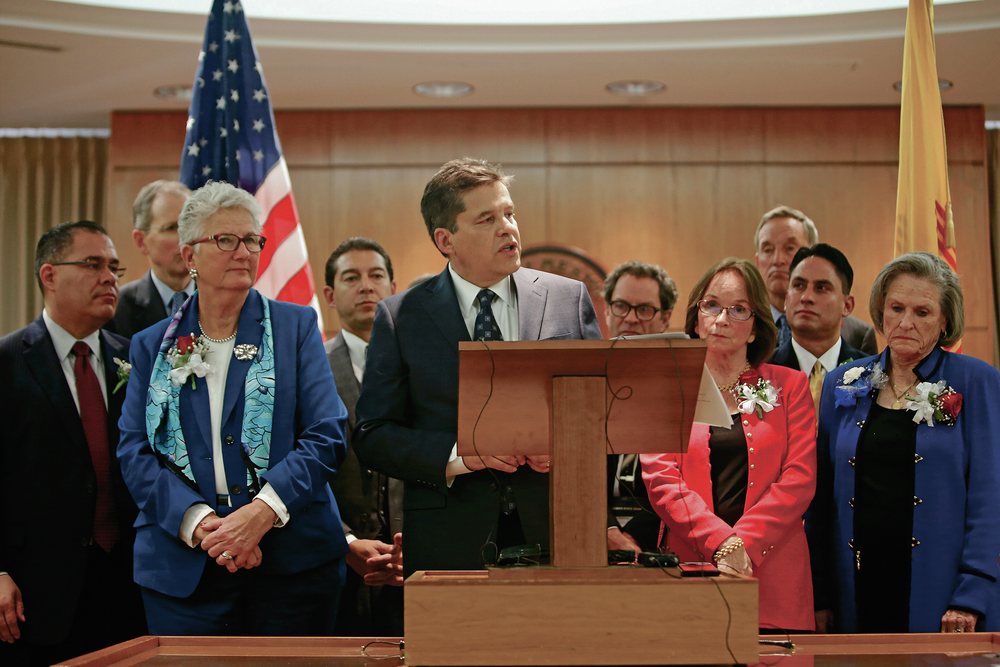 Sen. Joseph Cervantes, D-Las Cruces, joins his fellow Democrats on Tuesday during a press conference after the State of the State address during the first day of the state Legislative session.

State Sen. Joe Cervantes, giving the Senate Democrats’ response to Gov. Susana Martinez’s State of the State address Tuesday, set the tone for the Democratic agenda for the new legislative session, rattling off dour economic statistics and saying it’s time for the state to stop relying on the booms and busts of oil and gas revenue and focus on job creation.

“The state of our state is unacceptable,” he said, succinctly summarizing his caucus’ position.

Cervantes, a lawyer from Las Cruces, spoke in measured tones, saying that most governors use the opening speech of a session to say, “The state of the state is strong.” He said Martinez was to be commended for not doing that.

“She could not look at any of us and tell us with a straight face that the state of our state is strong,” he said.

Related: Martinez calls for unity during State of the State

During his 25-minute speech, Cervantes, a probable candidate for governor next year, read off a laundry list of dismal statistics showing New Mexico at or near the bottom in national economic rankings and near the top in poverty rates. He said 27,000 people in New Mexico have left the state to look for work.

Martinez, in her speech, made several references to how much state revenues have been hurt by decreasing oil and gas prices.

Cervantes said, “It’s time to stop bemoaning these falling oil and gas prices, and it’s time to take these things that are beyond our control and use the resources and tools that we have in hand and which are in our control.”

He promised that Democrats in this session would offer “concrete solutions” for the economy. But he was not specific about what those plans would be.

Cervantes criticized Martinez’s proposed budget, which calls for state employees to pay more into their pensions. He quoted Martinez’s first State of the State address, in which she called a budget “a statement about our values.” Decreasing the take-home pay of public employees does not reflect the state’s values, he said. Cutting the take-home pay of teachers in particular is short-sighted, he said.

“Our goal this session will be balancing the budget by sharing the sacrifice among all New Mexicans,” Cervantes said.

Cervantes welcomed Martinez’s calls for bipartisan cooperation. But, in a reference to the 2013 tax-cut package Martinez passed with the help of Democratic leaders in the Legislature, Cervantes said, “We also have to recognize in the past that some of the governor’s policies we cooperated with and we helped with and we tried to help succeed … some of those policies have not born fruit.”

Cervantes said when “we cut corporate taxes in 2013, the idea is that this would stimulate jobs. … But the reality is that last year and 2015, New Mexico took the largest fall of any state in the nation for [having] a business-friendly environment. … The corporate tax cuts of 2013 have cost us $108 million, which is an important number to put into perspective when we’re here today struggling to make up a difference of $69 million trying to make up our budget deficit.”

He said in the past Martinez has pursued tax cuts as “her sole vehicle or engine for jobs and economic development in New Mexico.” He said he was glad Martinez didn’t propose more tax cuts in her speech.

Cervantes said the Legislature in the past had also supported some of Martinez’s education policies, such as giving letter grades to public schools. He also pointed to increased testing pushed by the administration in saying those policies have failed to improve student achievement.

“We’ve given the governor’s policy on education the opportunity to succeed, and where they have not succeeded, we will resist any expansion of those policies and we will put forth our own as Democrats,” Cervantes said.

And he reiterated Senate Democrats’ opposition to a perennial Martinez bill — which she called for in her speech Tuesday — to hold back third-grade students who don’t read at grade level. Even if this policy did work, Cervantes said, it would do nothing for students beyond the third grade.

However, the Martinez-backed bill that would hold back third-graders, sponsored by Rep. Monica Youngblood, R-Albuquerque, also would require students from fourth grade through eighth grade who still have problems reading to be given “academic proficiency plans,” including placing them in small remedial classes for individual attention.

Cervantes said the Democrats’ plan is to involve parents more.

Cervantes said Democrats won’t accept such legislation, which, he said, “will find the same fate as [similar bills] have in the past.”

Contact Steve Terrell at 505-986-3037 or sterrell@sfnewmexican.com. Read his political blog at www. santafenewmexican.com/news/blogs/politics.