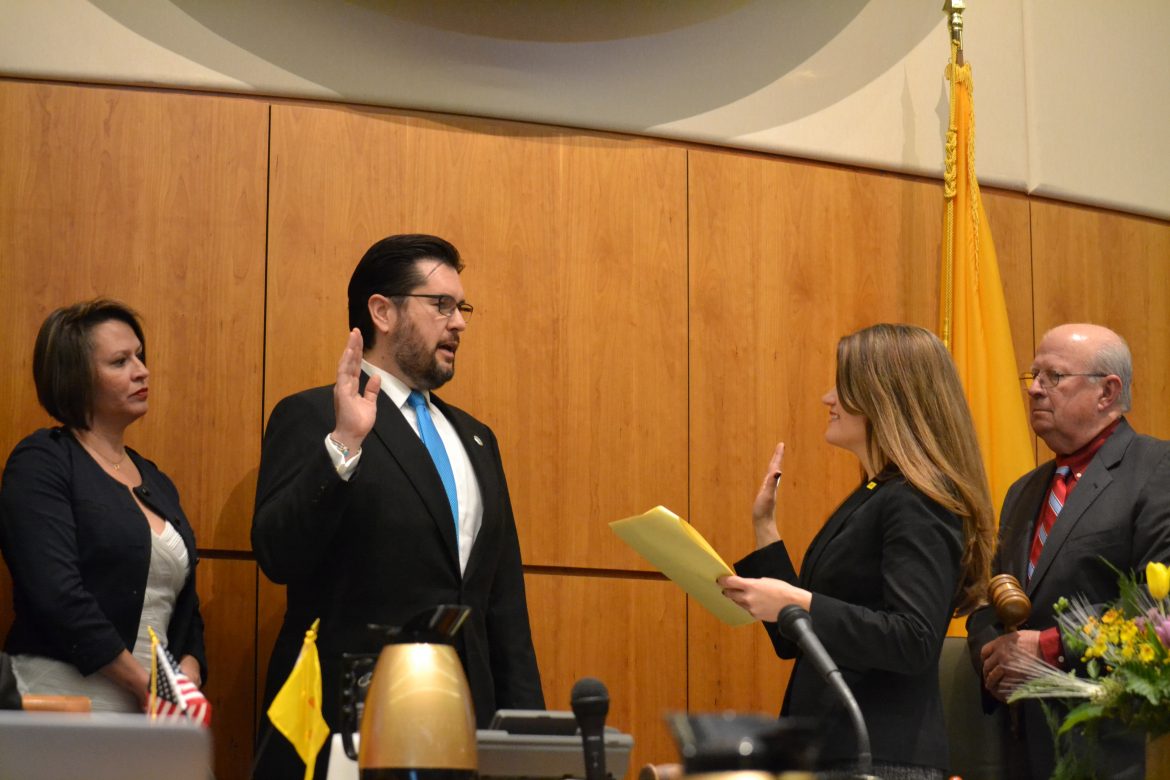 After being elected Speaker of the House, Rep. Brian Egolf, D-Santa Fe, takes the oath, administered by Secretary of State Maggie Toulouse Oliver.

Democrats officially took back control of the state House of Representatives Tuesday when Brian Egolf, D-Santa Fe, was elected Speaker of the House by acclamation, without the need for a vote from members.

Republicans put forward, in a symbolic gesture, Don Tripp, R-Socorro, as their choice for the post. Tripp declined the nomination.

Egolf thanked the former speaker for his service. Tripp then received a standing ovation from those in the chamber in both parties.

In a short speech, Egolf said that he wished to show a true desire for bipartisanship. Egolf mentioned a “jobs” tour where Democrats went to Republican-dominated areas of the state like Roswell to talk to New Mexicans.

“We can all agree that we want our children to have the economic security knowing if they can work hard and complete their education, they can find a great job right here in New Mexico,” he said.

Egolf also said someone who puts in a “honest 40-hour work week” should be able to support their family on that salary, setting the stage for Democrats’ push for increasing the minimum wage this year.

“We want to make our state more attractive to new industries while also promoting our small business owners and entrepreneurs so they can thrive,” he said.

Democrats hold a 38-32 advantage in the House after the 2016 elections.

“Let’s not answer to the extremes of the political spectrum nor to political insiders,” Egolf said. Instead House members should represent New Mexico families, Egolf said.

Lisa Ortiz McCutcheon was elected House Chief Clerk by acclamation, as was Wilfred Quintana to the position of Sergeant at Arms of the House.

The lack of opposition from Republicans to Democrats in leadership roles came in contrast to Democrats in 2015 who, after losing control of the House in 2014 elections, put forward their own candidates and had votes for all the positions.