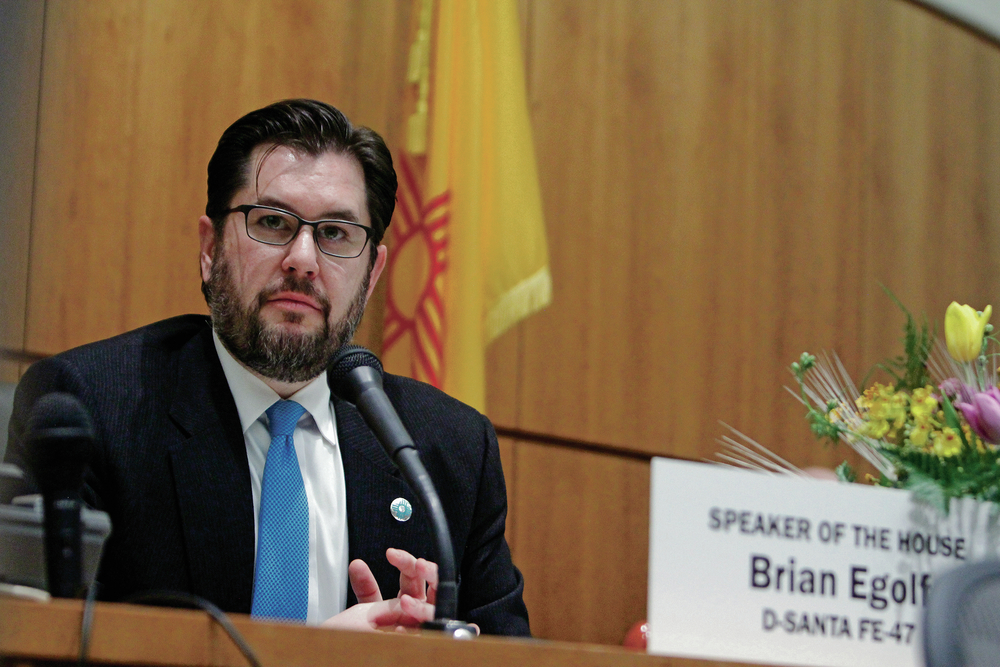 Rep. Brian Egolf, D-Santa Fe, takes the speaker’s chair Tuesday after being elected speaker of the house on the first day of the state legislative session at the Roundhouse.

Brian Egolf, on his first night as speaker of the New Mexico House of Representatives, selected nine committee chairmen and chairwomen who will be in leadership jobs for the first time.

Egolf, D-Santa Fe, on Tuesday also expanded the number of committees in the House from 13 to 14. Republicans, back in the minority after two years as the controlling party, objected to adding a committee but lost on a party-line vote of 38-29.

Minority Leader Nate Gentry, R-Albuquerque, said the additional committee would create the need for more staff. Egolf said that was not the case because the existing pool of legislative analysts would handle the workload for all committees.

Egolf, a 40-year-old attorney, won the speaker’s job several hours earlier. Republicans actually nominated former Rep. Don Tripp of Socorro, who was speaker the two previous years, after he had resigned his seat in the House and his replacement was on the House floor. But then the Republican members agreed to choose Egolf by acclamation, knowing they did not have the votes to defeat him. Democrats control the House, 38-32.

Egolf said he was moved by the decision to name him speaker without a contest. He then offered conciliatory comments.

“No party nor any person has a monopoly on good ideas,” he said.

But Egolf also spoke of his party’s approach to solving some of the state’s most pressing problems. Alluding to high unemployment and stagnant pay, he said: “Too many people in our state feel their basic needs are not being met,” a reference to staples of the Democrats’ agenda, such as raising the minimum wage and expanding funding for early childhood education.

One of his first acts as speaker was to announce his choices to lead the House committees. He selected all Democrats, maintaining the custom of the party in power running all the committees.

Egolf picked Rep. Stephanie Garcia Richard of Los Alamos to chair the Education Committee, one of the high-profile leadership positions. She is a teacher beginning her third term in the House.

Egolf selected a veteran lawmaker, Rep. Patricia Lundstrom of Gallup, to head the Appropriations and Finance Committee. It is her first time chairing a committee.

Egolf chose a trio of second-term members to run other notable committees.

Rep. Bill McCamley of Mesilla Park will chair a newly structured committee that combines labor and economic development. And Rep. Debbie Armstrong of Albuquerque will chair the Health and Human Services Committee.

Egolf chose Rep. Bobby Gonzales of Taos to return to his old job as chairman of the Transportation and Public Works Committee. Gonzales in November unsuccessfully challenged Egolf in the Democratic Caucus for the speaker’s job.

Other committee chairman named by Egolf:

All the committees will be starting points for bills. A measure that is tabled in a committee typically dies without further discussion.