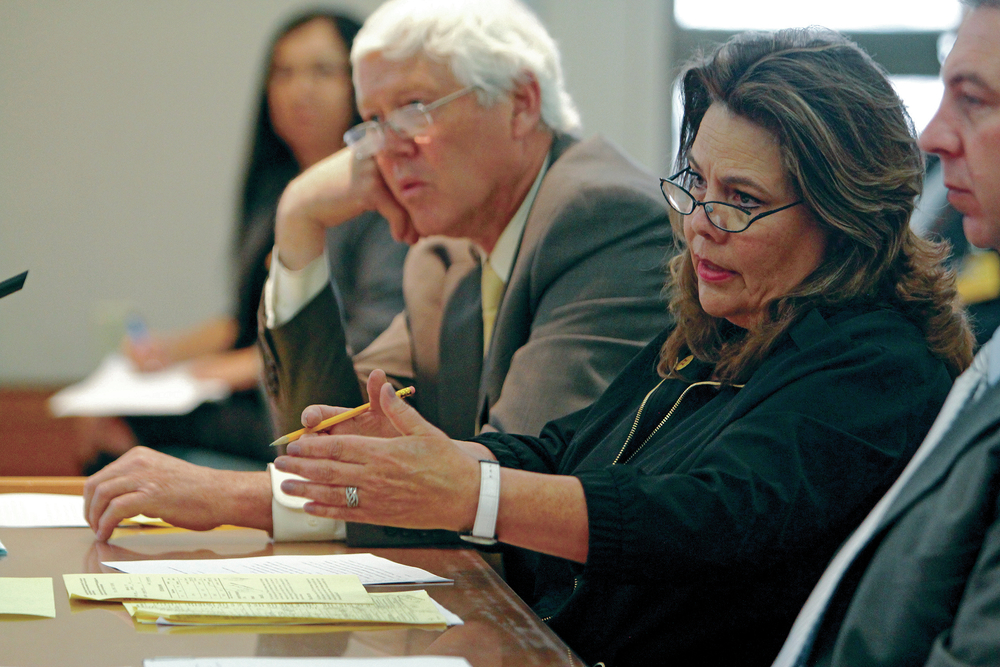 Rep. Patricia A. Lundstrom, D-Gallup, speaks during a House Appropriations and Finance Committee meeting on Wednesday at the Capitol about bills to balance state government's budget for the current fiscal year, which ends June 30.

For the third time in just over a year, New Mexico lawmakers have to find a way to balance the state’s checkbook and pay outstanding bills before moving ahead with new initiatives.

The state Senate and House of Representatives got started on that effort Wednesday as legislators worked to balance the $6 billion general fund with transfers and cuts to finish out the current budget year, which ends June 30.

On a bipartisan vote, the Senate approved and sent to the House four separate measures that should erase a projected $70 million deficit and replenish depleted reserves, partly by targeting school district cash balances and postponing spending on various projects. The House, where a key committee cleared legislation on Wednesday, is likely to vote on the plan Thursday.

“There are no good choices. There are only bad choices,” Rep. Paul Bandy, R-Aztec, said during a meeting of the House Appropriations and Finance Committee.

The state constitution bars the governor and state treasurer from spending more money than New Mexico is collecting in taxes and fees. Lawmakers passed a solvency package in February, but that proved insufficient as revenues fell. They returned for a special session in October, trimming even more spending from state operations, including public schools and universities.

“We thought we were in compliance after the special session,” said David Abbey, director of the Legislative Finance Committee, which oversees agency appropriations. “It needs to be addressed swiftly.”

Democrats who control both the House and Senate said the state can only spend the money it has. If Republican lawmakers want to cut less, they ought to send that message to Republican Gov. Susana Martinez, who has refused to increase taxes or fees during her administration.

“We’re out of compliance with state statute,” said Rep. Patricia Lundstrom, D-Gallup, who chairs the House Appropriations and Finance Committee. “Nobody likes any of this.”

Her committee approved bills Wednesday that include:

* Tapping unspent money for some public works projects and using it for day-to-day operations, then reviving the projects by issuing bonds to investors.

* Sweeping money from dozens of state accounts, including money from capital building repairs, wildlife protection and the Local Economic Development Act. Some $11 million would come from special initiatives in the Public Education Department for teacher merit pay and a program to provide extra help to students.

* Moving some $49 million of unspent balances from charter schools and public school districts into the state general fund.

While the Senate Finance Committee approved most of the measures with a strong bipartisan vote, it was clear there would be more resistance in the House, where Democrats regained a majority after the November election.

One of the points of contention whether to take money earmarked for a state economic development program that is used as a closing fund to help new and expanding businesses in New Mexico. The grants are allocated to local communities to build the public structure required by businesses. These projects include roads, sewer and water lines, utility work and even airport hangars.

Economic development grants were expanded to $50 million in 2013 with broad support from both parties as a way to send a message that New Mexico can compete to provide the services needed for companies such as Facebook, which is building a data center in Los Lunas that will benefit from $10 million in infrastructure paid for by the state.

It has also been popular with smaller firms that don’t have the capital for the road and sewer work often required for manufacturers.

Gov. Martinez opposes any transfer from the economic development account. The $50 million fund was supposed to be permanent, with money staying at the state Economic Development Department, even if it is not all allocated, as an incentive for business recruitment.

According to legislative staff, $34 million of the fund is not designated for a project. The House version of the solvency bill would transfer $14 million of that to the general fund.

Rep. Larry Larrañaga, R-Republican, said the $50 million fund sends a strong message to businesses but cutting it tells them, “there is no money for expansion of economic development.”

Not included in the bills moving forward in the Legislature is a Martinez-backed proposal to decrease the state’s contribution to public employee pensions by 3.5 percent. Her administration argues the plan bolster reserves.

But Democratic leaders, including Senate Finance Chairman John Arthur Smith of Deming, said the so-called pension swap would not be considered. Smith said it amounted to a cut in take-home pay for public employees, who would have to divert more of their salaries into their retirement accounts.

The level of state reserves has been controversial since Moody’s lowered the state credit outlook, which can increase the cost of borrowing money for state governments as well as school districts.

Approving the solvency measures this week is a priority for the new Democratic leadership in the House and Senate. They want to put the fiscal troubles of recent years behind so they can move ahead.

Resolving the current-year deficit will allow lawmakers to start crafting a spending blueprint for the fiscal year that starts on July 1, when new spending cuts for government agencies are proposed.