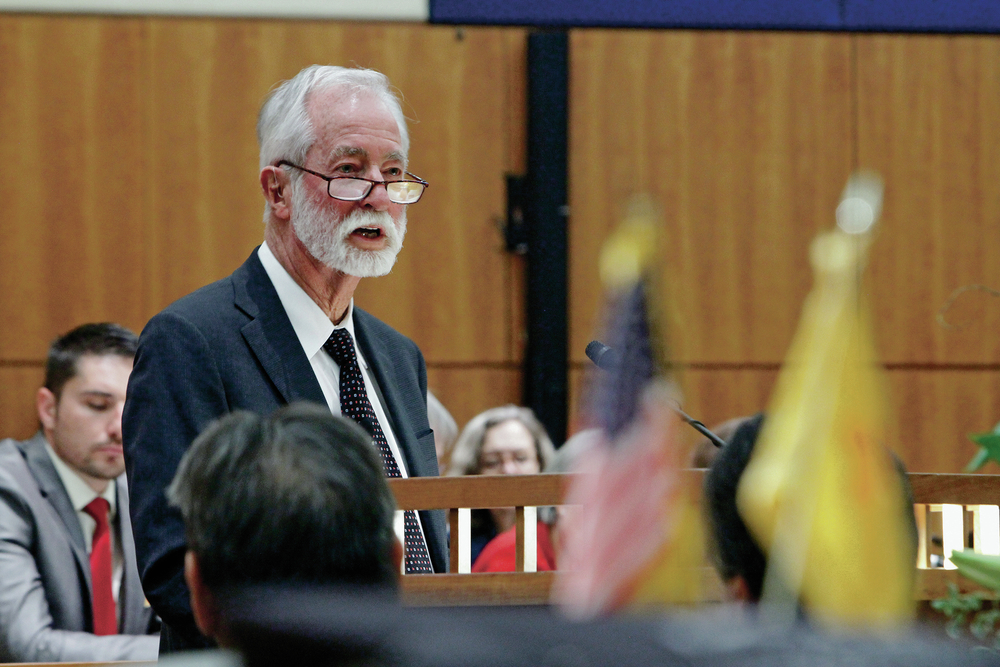 New Mexico Supreme Court Chief Justice Charles Daniels painted a dour picture of the state's cash-strapped judicial system during a joint session of the Legislature on Thursday when he presented his the State of the Judiciary address. Daniels also announced that he will step down from the high court's top position this spring.

State Supreme Court Chief Justice Charles Daniels on Thursday portrayed a state court system in crisis, withering from funding cuts to the point it can no longer provide indigent defendants their constitutional rights to an adequate defense. Without those rights, he told lawmakers during his annual State of the Judiciary address, laws simply become “words on paper.”

“New Mexico’s justice system is on life support, and its organs are failing,” Daniels said.

He acknowledged the statewide budget crisis and said he’s used to hearing lawmakers say, “We don’t have any money.”

When it comes to funding jury trials and public defenders, Daniels said, “We don’t have a choice. We have to comply with the Constitution of the United States.”

Anything less undercuts the legal system, he said.

Daniels announced during his speech that he’ll step down as chief justice this spring, but will remain on the Supreme Court at least through the end of his term, which runs through 2018.

He told The New Mexican afterward that he believed he had done all he could as chief justice and wanted to transition out of the position. He said it involves a lot time responding to budgetary crises, and he instead wants to focus on “doing something where I can accomplish something.”

The five members of the Supreme Court elect a chief justice every two years. This is Daniels’ second time in the position, as he served as chief justice from 2010 to 2012. Fellow justices again elected him as chief justice in April 2016, and he would have served until April 2018 had he finished out the term.

Typically, he said, the position rotates to the most senior justice who has not yet served. Daniels said Justice Judith Nakamura is next in line to be chief justice.

During his most recent turn as the court’s leader, Daniels took on a political role. He lobbied legislators to amend the constitution to allow a bond reform measure to be placed on the ballot. Voters approved the measure last November.

It gave judges the authority to deny bond for defendants they considered dangerous or flight risks, but the measure also directed judges to release people who didn’t pose a risk but couldn’t afford bail.

Daniels said there is still much work to be done writing the policies to guide judges in implementing the reform. He said it is something he is committed to seeing through.

Daniels had already told his colleagues on the court he was stepping down as chief justice, but regretted making the public announcement during his address because he didn’t want it to take focus away from the budgetary crisis in the courts.

During his address, Daniels said high turnover among low-paid court employees, inadequate funds to pay jurors and an overloaded Law Office of the Public Defender were indicators that the judicial system is on the verge of collapse.

Already, he said, many magistrate courts around the state close to the public for an hour or more per day to allow staff to complete paperwork. Moreover, he noted, the public defender’s office in Hobbs has notified judges that it won’t accept any new cases because it’s already struggling to provide an adequate defense to the clients it now has.

Daniels reminded lawmakers that the judiciary is a separate branch of government but, he said, it’s the only branch that has no control over its own funding.