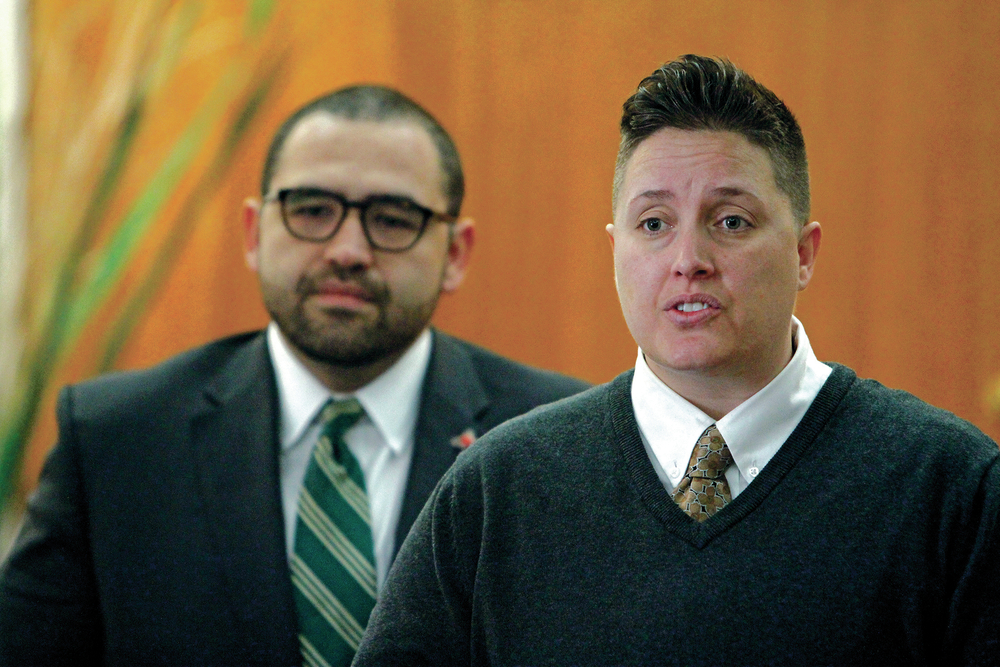 Randy Royster, whose daughter underwent "conversion therapy" to try to change her sexual orientation, speaks Thursday at a news conference at the Capitol in support of legislation to ban the use of the treatment on minors.

Randy Royster said when his daughter Amber started questioning her sexuality as a teen, he sent her to a therapist recommended by his pastor. The therapist used “conversion therapy,” a treatment designed to change a person’s sexual orientation.

Royster said the therapy caused great harm to his daughter and guilt and shame for him.

“No loving parent would purposefully do something that would hurt their children,” he said. “Had I known then what I know now, I would have turned to a therapist who understands that trying to change a young person’s sexual orientation through therapy is a long-discredited practice that often causes long-term mental and physical harm.”

Royster, president and chief operating officer of the Albuquerque Community Foundation, spoke Thursday at a new conference at the Capitol in support of legislation to ban the use of conversion therapy on those under 18.

Amber Royster, now 36 and openly gay, is the long-time executive director of Equality New Mexico, a major gay-rights organization in the state, and has long worked the halls of the Roundhouse fighting for and against legislation affecting the LGBT community.

Sen. Jacob Candelaria and Rep. Andres Romero, both D-Albuquerque, introduced the legislation, Senate Bill 121, to prohibit the use of conversation therapy on minors.

Physicians and therapists groups have condemned the treatment, but most states allow the therapy for children. Six states, including California and New York, and several cities have imposed bans.

The proposed New Mexico legislation involves amending several laws that regulate medical, nursing and counseling practices. Therapists who use conversion therapy would be in danger of losing their licenses.

Royster said he raised his daughter in an evangelical Christian environment. He said when Amber started questioning her sexuality, he was worried, mostly because he knew homosexuals were often the targets of discrimination and physical attacks.

“When parents witness their children hurting, we want to help them,” Royster said. “We turn to communities we know for support, and what I knew at the time was the church.”

He said his daughter was subjected to therapy steeped in guilt and shame to try to change her.

“She was made to feel afraid of what might happen should she live her life as a lesbian, including rejection by her family and friends, and eternal damnation in hell,” Royster said. “I never indicated or said that I would reject her, but that fear was manipulated against Amber by people in whom I placed great trust and in a place I thought was safe.”

He said his daughter was diagnosed with post-traumatic stress syndrome several years ago and “struggles with anxiety on a daily basis, and tends to isolate. It can be difficult for her to participate with our family and in the world.”

A booklet published by the American Psychiatric Association and several other organizations says:

“Despite the general consensus of major medical, health and mental health professions that both heterosexuality and homosexuality are normal expressions of human sexuality, efforts to change sexual orientation through therapy have been adopted by some political and religious organizations and aggressively promoted to the public. However, such efforts have serious potential to harm young people because they present the view that the sexual orientation of lesbian, gay and bisexual youth is a mental illness or disorder, and they often frame the inability to change one’s sexual orientation as a personal and moral failure.”