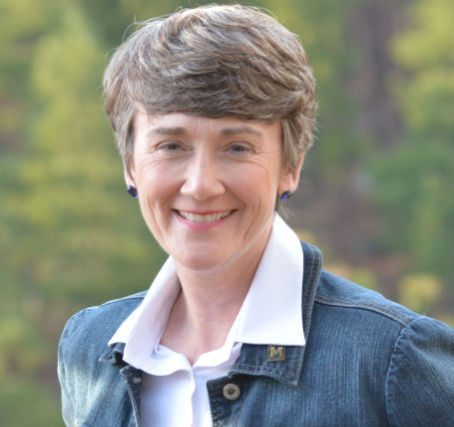 President Donald Trump announced he will nominate Heather Wilson to join his administration as Secretary of the Air Force.

Wilson is a former congresswoman from New Mexico, representing the Albuquerque area. She is currently the President of the South Dakota School of Mines and Technology. Perhaps more relevant to her nomination, she graduated from the Air Force Academy and served as an Air Force officer in Europe.

According to Trump’s administration, Wilson would be the first Air Force Academy graduate to serve as as Secretary of the Air Force.

In December, Wilson met with Trump’s transition team to discuss a possible “senior national security position.” A Fox News reporter said at the time the position being discussed was the Director of National Intelligence. Trump nominated former U.S. Sen. Dan Coats of Indiana for that position.

“Heather Wilson is going to make an outstanding Secretary of the Air Force,” the president said in a statement. “Her distinguished military service, high level of knowledge and success in so many different fields gives me great confidence that she will lead our nation’s Air Force with the greatest competence and integrity.”

Wilson promised to “do my best, working with our men and women in the military, to strengthen American air and space power to keep the country safe.”

Wilson would need to be confirmed by the Senate for the position.

She then became the director for European Defense Policy and Arms Control on the National Security Council Staff under President George H.W. Bush.

Wilson, a Republican, served in the U.S. House of Representatives from 1998 to 2009 as the representative of the state’s First Congressional District, which includes Albuquerque. She won increasingly narrow elections to her House seat until she ran for U.S. Senate in 2008. She lost in the 2008 U.S. Senate primary to Steve Pearce. Wilson again lost in the 2012 U.S. Senate race, this time in the general election against Democrat Martin Heinrich.

While in Congress, Wilson served on the House Permanent Select Committee on Intelligence and chaired the Subcommittee on Technical and Tactical Intelligence.

Last year, Lockheed Martin Corp, which currently operates Sandia National Laboratory, paid a $4.7 million settlement for allegedly lobbying for a no-bid contract extension using federal funds. One of the companies involved in the lobbying was one run by Wilson.