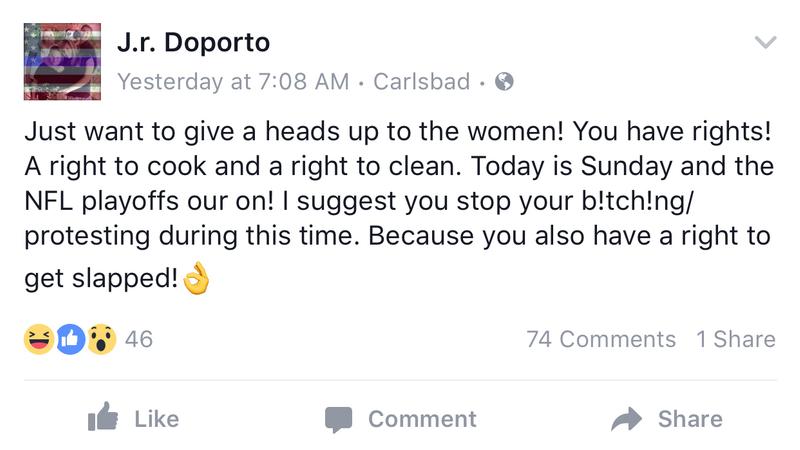 When a local politician makes statewide news, it rarely is good news. Such is the case for J.R. Doporto, a city councilor from Carlsbad who landed himself in a firestorm after writing a misogynistic Facebook post telling women they “have a right to get slapped.”

He wrote the comment on his personal Facebook page, which is now marked private or deleted. But, on the internet, such posts are forever. Screenshots show Doporto, in apparent response to the massive Women’s March in Washington D.C. and across the country, wrote:

Just want to give a heads up to the women! You have rights! A right to cook and a right to clean. Today is Sunday and the NFL playoffs our on! I suggest you stop your b!tch!ng/protesting during this time. Because you also have a right to get slapped.

The comments were first flagged by KOB-TV. He was unapologetic at the time and told the TV station he was joking.

“It was taken out of context,” Deporto told the station. “It was a joke by saying you know a woman should be slapped.”

Before deleting or making his Facebook page private, he addressed the controversy.

The Associated Press picked up the story, spreading it nationwide.

But perhaps more important to Doporto, the Carlsbad Current-Argus covered the story.

To them, he apologized. Sort of.

“Reading through the responses really opened my eyes to how sensitive the nation is right now. People have strong opinions and are ready to share their thoughts especially on social media,” Doporto said. “If I offended anyone I am sorry, as an elected official I owe you that.”

Doporto also said that “KOB blew it out of proportion.”