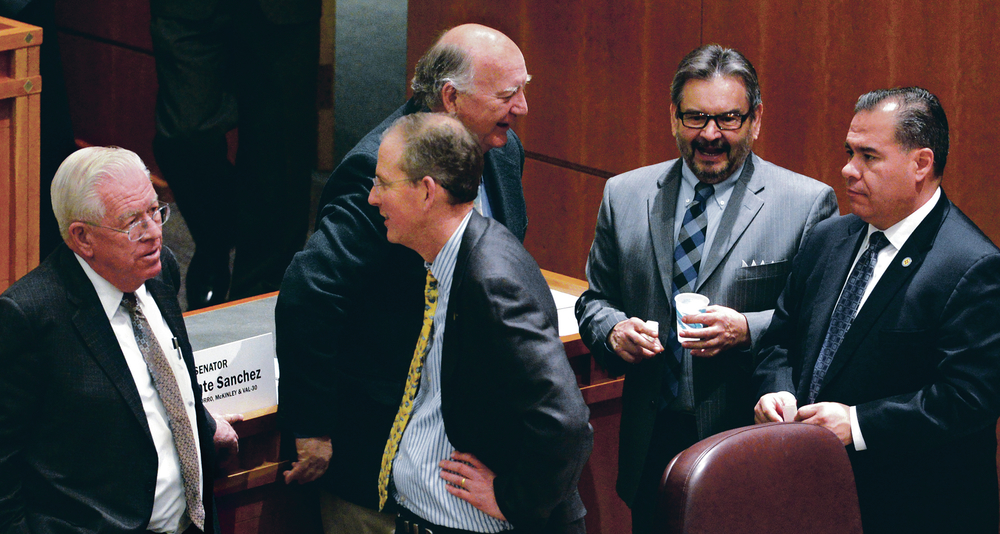 State lawmakers on Wednesday passed the last pieces of a plan to balance New Mexico’s budget for the current fiscal year and rebuild the state’s drained cash reserves, coming to compromises on cuts to education funding and an economic development program.

Unclear is whether Republican Gov. Susana Martinez will veto any pieces of the solvency package for fiscal year 2017. She has vowed to protect funding for classroom instruction and the state’s “closing fund” intended to draw prospective investors to the state, but a proposal she preferred would have taken far more money from school districts’ reserve funds than the plan approved by lawmakers.

Martinez has three days to act on the bills, and a spokesman said the Governor’s Office will need to closely scrutinize parts of the proposal, echoing the criticisms of House Republicans.

“For example, lawmakers chose to protect their personal legislative retirement accounts, while at the same time tried to squeeze money out of other areas of government,” Mike Lonergan said in an email late Wednesday.

Lonergan said, however, that the governor “feels this is close to a solvency package she discussed with legislators.”

Even if Martinez signs the measures, legislators will still be pressed to find additional savings or new revenue in the budget for fiscal year 2018, which begins in July.

The plan passed Wednesday will cut slightly less from public schools than a bill approved by the state Senate last week. The Senate initially called for taking about $50 million from districts in the remaining five months of the fiscal year, with the assumption that they would take the money from their reserves. But with some districts’ reserves nearly empty or altogether depleted, the House passed a plan that would have taken about $40 million from public schools and ensured that no district or charter school would be left with less than 4 percent of its budget in reserves.

Under the compromise measure, the state will only take money from districts that have more than 3 percent in reserves, for a total savings of about $46 million.

“There were some districts that would literally go into the hole,” Rep. Dennis Roch, R-Logan, said of the Senate’s original plan.

Districts rely on reserves to pay for programs before receiving government funding to cover the costs, he said. “If you don’t have cash in the bank, you can’t run those programs.”

Roch warned the cuts approved in the compromise would still “do some damage.”

But the final agreement takes far less from school districts than the $120 million Martinez proposed earlier this month, describing the cash reserves as “slush funds.”

Lawmakers also agreed to scale back cuts to an economic development program that awards grants to local governments for infrastructure improvements to attract new businesses or help businesses expand. The compromise plan cuts $4 million from the Local Economic Development Act rather than an $11.6 million cut approved by senators. The proposal was part of an $80 million bill that would sweep up unspent funds from various accounts across state government.

Though the plan to tap the fund received bipartisan support in the Senate, Republicans in the House have opposed taking money from the program, arguing that it is already underfunded.

House Republicans also opposed an eleventh-hour earmark dedicating $2 million from the grant program for repairs at a hangar in Roswell used by a company that paints aircraft. Republicans argued that including the project in the solvency package at the last minute would violate the Legislature’s rules.

The measure passed, nonetheless, with the House voting along party lines to send both solvency proposals to the governor.

Lawmakers have already sent Martinez another bill that would sweep about $80 million from insurance taxes into the general fund.

The three-piece solvency package that passed both chambers this week will raise a total of $216 million for the state’s general fund, closing a deficit projected at $69 million before the session began and boosting the state’s reserves to 2.3 percent. The plan falls short of one put forward by legislative staff shortly before the session began, which would have raised about $261 million and replenished reserves to 3 percent.

Increasing reserve funds has been a priority for some lawmakers after much of the state’s cash was used in previous attempts to balance the budget amid declining oil and gas prices and a generally sluggish economic recovery.

The nearly empty coffers have raised alarm. Moody’s downgraded New Mexico’s bond rating last year. Some legislators have argued that New Mexico faces another downgrade — and potentially higher costs for borrowing money — if it does not sock away more cash in reserves.

Also on Wednesday, the Senate approved $800,000 in emergency funding for New Mexico’s struggling court system to pay for jurors, witnesses and interpreters. State Supreme Court Chief Justice Charles Daniels warned lawmakers last week that without extra funding, the judiciary would have to stop holding trials in March, when it runs out of money to pay jurors.

The bill includes $200,000 for the Aging and Long Term-Services Department.

Lawmakers can now begin to work in earnest on a budget for fiscal year 2018, which begins in July. Democrats have said they will seek to increase revenues by raising taxes or closing tax loopholes — setting up another showdown with the governor, who has repeatedly said she will oppose any tax increase.

There are signs that lawmakers and the governor might have more revenue to work with in the coming year. A new report on gross receipts taxes collected in the first five months of the current fiscal year, a total of $475.8 million, shows an increase of 1.9 percent over the first five months of the previous fiscal year and a 5.8 percent increase in the month of November over the same month in 2015.

That’s far better than the monthly drops that had been reported.

Economists with the Legislative Finance Committee cautioned, however, that one-time payments might be skewing the totals. Lawmakers will get a thorough analysis of the state’s fiscal outlook in mid-February, about halfway through the 60-day session.

Bruce Krasnow contributed to this report.