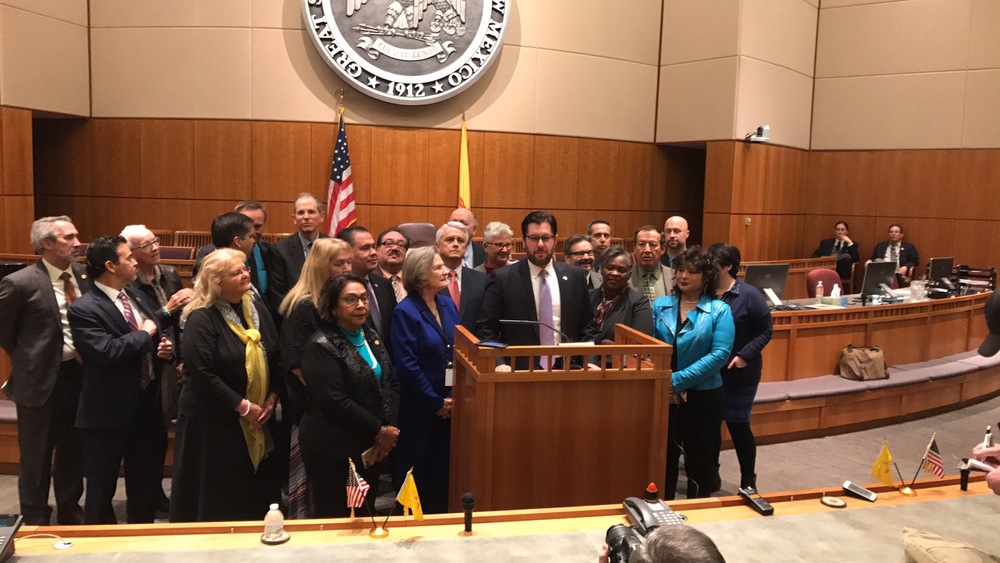 Democrats in the state Legislature on Thursday outlined a six-point jobs plan, including a raise in the minimum wage and spending on public works projects, that they said would be their focus for the remaining 50 days of the legislative session.

But Democrats were unable to project how many jobs would be created by the plan or provide details on how some parts of the plan would work. Still, they promised to deliver for a state still trying to find its economic footing more than seven years after the end of the Great Recession.

“Today, families and young people in our state are confronted with poor prospects for getting a job,” Sen. Clemente Sanchez, D-Grants, said at a news conference on the Senate floor. “Far too many residents are living in real economic distress, and anxious about the future for themselves and their children. Democrats in the Legislature will take action to restore their hopes and dreams.”

In addition to a raise in the minimum wage — it has been $7.50 an hour for several years — the jobs plan includes spending $63 million on infrastructure projects around the state.

House Speaker Brian Egolf, D-Santa Fe, said many of the ideas in the package came from a “listening tour” of southern and eastern New Mexico cities by him and other legislators last year. They met with local officials, business leaders and others to get ideas about what could be done to increase employment in their communities.

Egolf was short on details about the plan and how it would affect the state’s economy. When asked by a reporter how many jobs the various proposals were projected to create, the speaker replied, “lots.”

And while the lawmakers touted the money for public works projects as something that would increase employment, $63 million would be the lowest amount of capital outlay by the Legislature in years. The amount of brick-and-mortar money varies each year depending on the amount of severance tax revenue available, and severance taxes have taken a nosedive due to lower oil and gas prices.

The news conference came a day after the Legislature passed a $216 million solvency package aimed at fixing the state’s budget shortfall for the fiscal year ending in June.

Some of the proposals in the Democrat’s plan already are working their way through the Legislature’s committee system.

A House committee on Wednesday voted along party lines to advance a Democrat-backed bill that would increase the state’s minimum wage to $10.10 an hour over the next three years. If that bill is signed into law, the minimum wage would be adjusted annually based on the cost of living beginning in 2021.

There are other minimum wage bills that have been introduced — and probably others that have yet to be. Three years ago, Republican Gov. Susana Martinez vetoed a bill that would have raised the minimum wage to $8.50 an hour. But she has said she’d sign a bill for a wage lower than that.

There also are industrial hemp bills introduced in the Legislature. House and Senate committees this week approved measures that would require the state Department of Agriculture to issue licenses to grow industrial hemp for research and development purposes – including agricultural, agronomic, ecological, processing, sales and marketing research.

Supporters of the legislation said establishing a hemp program would boost farming as well as manufacturing in the state because hemp fibers can be used in an array of products including carpeting, construction materials and household goods.

The issue is controversial mainly because the fibrous plant is related to marijuana. An industrial hemp bill passed the Legislature by hefty bipartisan margins two years ago, but Martinez vetoed it. She said it would “unnecessarily complicate the task of law enforcement” and “create serious challenges for law enforcement in investigating drug crimes” because of the similarities between growing hemp and marijuana.

The amount of money Democrats propose spending on broadband development also hasn’t been determined. There are several bills related to broadband that have been introduced by both Democrats and Republicans.

Contact Steve Terrell at 505-986-3037 or sterrell@sfnewmexica­n.com. Read his political blog at www.santafenewmexica­n.com/news/blogs/poli­tics.