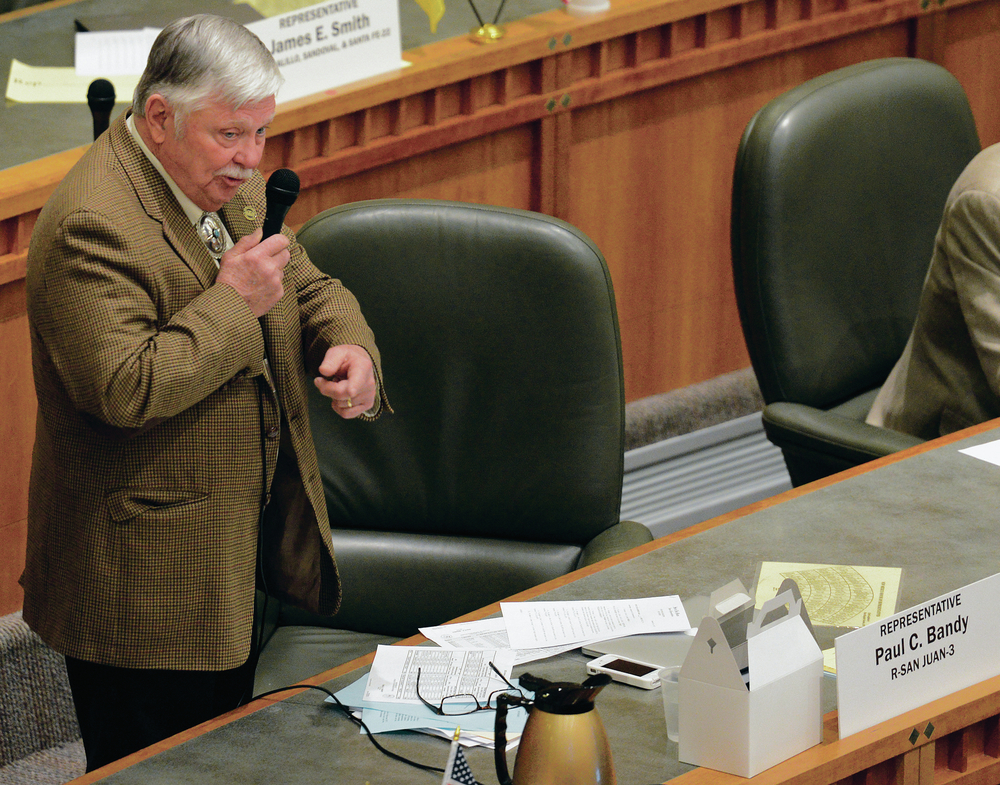 Rep. Paul Bandy, R-Aztec, speaks about Senate Bill 176 on the House floor during a debate over funding for the Legislature. Friday, January 27, 2017.

Passage of a “feed bill” to cover the costs of the New Mexico Legislature typically is a slam dunk, unanimously adopted as the first order of business at each annual lawmaking session in Santa Fe. But in an environment where partisanship can flare up in myriad ways, even that piece of legislation has become a battleground.

Gov. Susana Martinez on Friday night vetoed funding for the Legislature, taking on Democratic lawmakers less than two weeks into a 60-day session so far dominated by debate over the state’s budget crisis.

In a veto message, Martinez denounced Democrats for rejecting a proposal from Republicans in the state House of Representatives to reduce spending by the legislative branch at a time when other limbs of state government are being forced to get by with less.

“Despite repeatedly declaring that we’re in a ‘constitutional budget crisis,’ the Senate and House Democrats continue to find ways to protect themselves and their budget — even as they have squeezed money out of other areas of government,” wrote Martinez, a Republican.

Senate Bill 176, which actually had passed the Senate with bipatisan support, was an unlikely partisan flash point. But a sometimes rancorous discussion before the measure cleared the House on party-line vote signaled that the biggest divide during this session may not be between parties but between House Republicans and virtually everyone else except the governor.

It remained unclear on Friday night what steps top Democrats would take next. A spokesman said late Friday that Senate Majority Leader Peter Wirth “will be looking at all the options.”

The Senate bill would have kept the Legislature’s budget flat from the previous year but below 2015 funding levels.

The bill also contained $800,000 in emergency money for the state’s court system, which Chief Justice Charlie Daniels recently said would run out of funds for jury trials in March. The bill would have provided money, too, for the New Mexico Supreme Court to avoid furloughing employees and would have ensured extra dollars for the state’s adult protective services program amid a shortfall in its budget.

But Martinez described adding that emergency funding to a bill that pays the Legislature’s own expenses as “cynical,” “disturbing” and an attempt to provide “cover for their irresponsible spending.”

House Republicans made many of the same arguments earlier in the day during an unusual exchange in which legislators found themselves arguing over how much money to set aside to cover spending that includes their own staff, mileage and daily expense allotments.

House Republicans protested during nearly three hours of debate what they characterized as an attempt by their colleagues to spare the Legislature from the sort of budget cuts imposed on other parts of state government.

Democrats countered that House Republicans risked leaving legislative staff without paychecks and the state’s courts without a needed infusion of cash by holding up a funding bill that cleared the Senate with bipartisan support.

“I think there is a deliberate attempt to starve state government,” Rep. Antonio “Moe” Maestas, D-Albuquerque, declared during the debate.

Without the cuts Republicans had sought, the measure eventually passed on a party-line vote of 37-32.

The House on Jan. 19 had approved a different feed bill that would have cut funding for the Legislature by $631,700 — or 3 percent of spending for the 60-day session and 2.5 percent off its year-round expenses, such as policy analysts and economists. Minority Leader Nate Gentry, R-Albuquerque, said at the time that the reductions would subject New Mexico House members to the same sort of austerity being imposed on other parts of state government.

House members did not cut any funding for the Senate’s expenses before approving that version of the feed bill 65-0.

But the Senate drafted its own bill, leaving out the cuts proposed by the House. And that’s the version that the House majority eventually sent on to the governor.

The governor’s veto does not bode well for a package of bills that legislators sent the governor earlier in the week to close a projected $69 million deficit for the fiscal year that ends June 30 and to replenish the state’s depleted reserves.

Her staff has been noncommittal, not saying whether Martinez will sign the bills, veto pieces of the solvency package or reject the measures entirely.

In a message to members Friday night, the Greater Albuquerque Chamber of Commerce anticipated a “showdown in the ‘OK Corral’ on the solvency package coming up.”

House Republicans depicted the Senate feed bill as a crass attempt to exempt the Legislature from funding cuts even as members vote to take money from public schools and other areas of government.

“I thought it was justifiable to ask our body as a legislature to reduce our funding, too, so we are not asking the rest of the state and the state employees to do what we won’t do ourselves,” said Rep. Paul Bandy, R-Aztec, who had proposed the cuts contained in the House bill.

And some Republicans questioned whether the Senate was trying to boss around the House.

Legislation usually requires approval from two thirds of the members in each chamber to take effect immediately. But because the Senate’s bill would funnel money to all three branches of government, it could have taken effect with a simple majority, rendering moot the objections of House Republicans.

“We are giving up our power to the Senate to dictate what we do in the House,” said Rep. Monica Youngblood, R- Albuquerque. “We are allowing ourselves to get rolled.”

Gentry urged lawmakers to approve emergency funding for the courts through a separate bill that he filed Thursday.

Democrats countered that the funding for the Legislature’s expenses is needed for its staff to do their job.

“This isn’t about our bottom lines,” said Rep. Liz Thomson, D-Albuquerque, pointing out that compensation for legislators is set by the state constitution and would not change under either bill. “This isn’t about us. This is about us being able to do the jobs we were elected to do.”

Asked about the objections of House Republicans, one of the Senate feed bill’s sponsors, Republican Minority Leader Stuart Ingle, said: “I used to holler about all that, too.”

But Ingle noted that the Legislature has seen its own budget reduced repeatedly over the last several years.