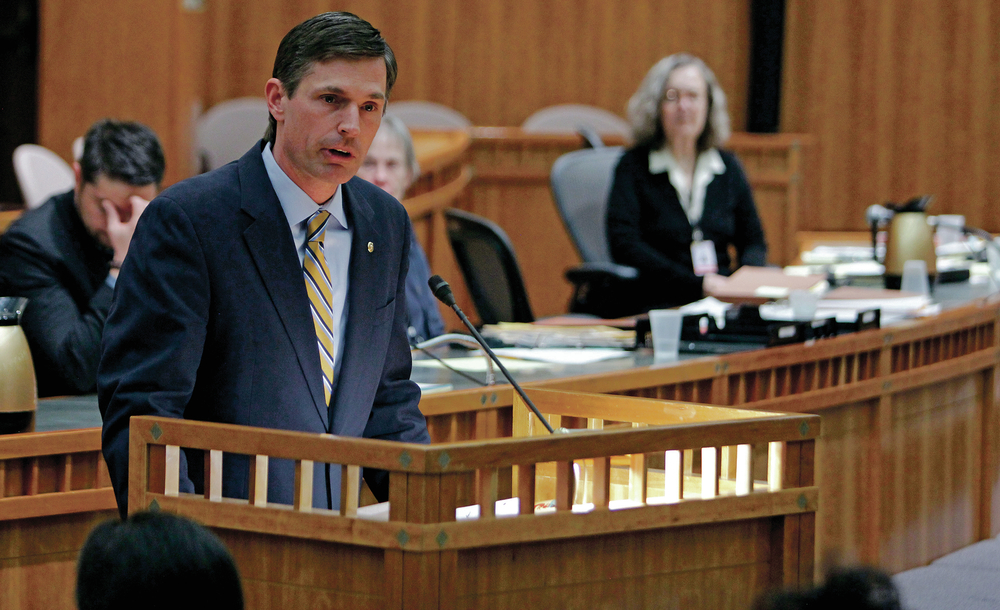 As customs officials detained travelers and protesters flowed into airports around the country, U.S. Sen. Martin Heinrich took to Twitter to register his opposition to President Donald Trump’s ban on refugees.

“I will not stand aside as the values that created the greatest nation on earth are trampled,” New Mexico’s junior senator wrote Saturday night, adding the tag “#NoBanNoWall.”

The response to Heinrich from some on social media users was swift: Tweets are cheap. Do something.

In a speech Monday to the New Mexico Legislature, Heinrich responded in harsher terms to the president’s order.

“President Trump’s action seeks to turn us into the kind of authoritarian nation we have always stood up to,” Heinrich said.

But he still left open the possibility of working with the new administration. Heinrich said he would not rule out voting for some of Trump’s nominees for high-tier positions.

Then, after his address, Heinrich mentioned that Democrats in the U.S. Senate are moving to cut off debate on the president’s nominee for secretary of state. Heinrich described this as an opportunity to make White House officials answer some hard questions.

Trump’s ban, signed Friday afternoon, prohibits all refugees from entering the country for 120 days and indefinitely bars refugees from Syria. It has spurred nationwide protests and it colored the state Legislature’s session Monday morning.

Two Democrats railed against the president’s executive order, receiving standing ovations from fellow members of their party but only scattered applause from Republicans.

“They are now not allowed to go home and come back,” McCamley said.

And Rep. Daymon Ely, D-Corrales, the only Jewish member of the state House of Representatives, recounted the story of the MS St. Louis, a German ship that carried about 900 Jews to the United States in 1939, during Adolf Hitler’s reign of terror. The U.S. government refused to accept the Jews and turned them back to Europe.

“We should not be repeating this sad chapter in American history,” Ely said.

Meanwhile, in Washington, D.C., Sen. Tom Udall of New Mexico planned to join with other Senate Democrats in a vigil outside the U.S. Supreme Court to denounce the president’s ban.

But Democrats still seemed to lack a clear strategy for responding to Trump’s executive order.

Heinrich said opponents of the refugee ban will move through the federal courts to strike it down while Congress responds in its role as a check on the executive branch’s power.

“We will push back. It will take time to grind through some of the legal issues in the courts. But we’re not going to lay down and take this,” Heinrich said.

Even so, the senator did not rule out voting for some of Trump’s nominees.

“We’re going to take them all one at a time,” he said.

Heinrich has opposed most of the president’s nominees so far and has said he will not support Betsy DeVos for secretary of education or Scott Pruitt to head the Environmental Protection Agency. But Heinrich voted in favor, along with nearly ever other senator, of confirming James Mattis as secretary of defense.

When asked about the vote, Heinrich paused.

“I have deep concerns about this administration and where they’re going,” he said. “And we will find the most effective way to push back against the things that don’t square with New Mexico’s values.”