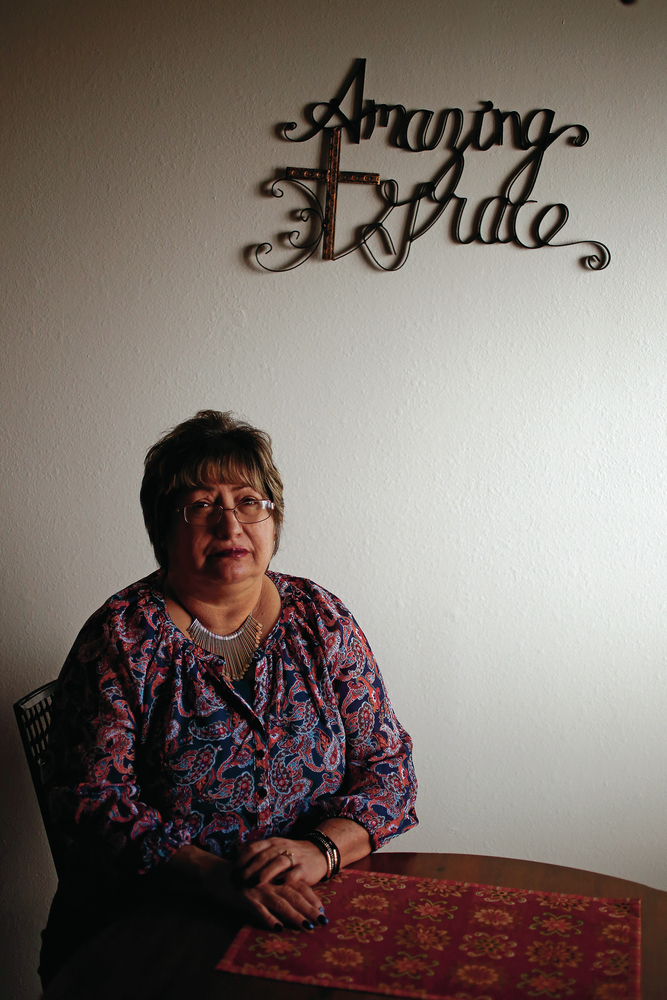 Lorraine Mendiola of Santa Fe poses Monday for a portrait at her home. Mendiola had a son in boarding homes in Las Vegas, N.M., and Albuquerque. She says he was physically assaulted.

Lorraine Mendiola told state lawmakers Monday that her son was physically assaulted while living in a bed bug-infested boarding home for people with mental illness in Las Vegas, N.M.

At another boarding home, this one in Albuquerque, her son slept in a converted garage with exposed electrical wiring, a bathroom with no door, a lack of wall insulation and no fire extinguisher or carbon monoxide detector, Mendiola said.

“It’s time to recognize and address that New Mexico must take responsibility for their mentally ill citizens,” she told the House Health and Human Services Committee. “These very vulnerable individuals have been living in substandard conditions because there has been no oversight.”

Mendiola appeared before the committee in support of legislation, House Bill 85, that would provide for at least minimal regulation of boarding homes. The state Department of Health, which says it doesn’t have the legal authority to oversee the homes, abolished its boarding home rules in 2000.

The committee unanimously approved the legislation, which now moves to the House Judiciary Committee. It is at least the third time in recent years that the Legislature has considered re-regulation of boarding homes. No home operators showed for the hearing.

Albuquerque Democrat Debbie Armstrong, the sponsor of the bill and chairwoman of the Health and Human Services Committee, said, “We are sticking our heads in the sand” when it comes to the conditions of some boarding homes.

“Some may be a step above the street but not by much,” Armstrong told the committee. “There are known places that are bad.”

Ellen Pinnes, a consultant with the Disability Coalition, a collection of advocacy groups for the disabled, also urged the committee to approve the bill, saying, “People are dying for lack of adequate facilities.”

The Fire Department has been unable to detect a carbon monoxide problem at the home or identify a possible source. The findings of an autopsy on the man who died haven’t been released.
In 2013, two men released from the state psychiatric hospital in Las Vegas died of carbon monoxide poisoning while a boarding home operator was charging them a total of $1,100 a month to let them live in a backyard shed.

Although boarding homes are an issue in Las Vegas because of the state hospital there and the large number of patients it discharges into the community each year, the homes also exist in other communities around the state. No one knows how many there are or where they are all located because of the lack of regulation.

The quality of the homes varies. Some resident live in crowded, substandard conditions and may go hungry because of inadequate meals. There also have been reports of violence, drug and alcohol abuse and financial exploitation of residents by home operators.

Many boarding home residents turn over their Social Security disability checks to operators in exchange for a bed and meals.

Under the bill to re-regulate the homes, the Health Department would develop rules requiring that the facilities be licensed by the department and meet minimum standards. Those standards would force the homes to have annual fire inspections and permits from the state Board of Pharmacy to store and dispense medications to residents, Armstrong said.

The legislation also would require the Health Department to develop more extensive model regulations for boarding homes that local governments could adopt. Those rules would deal with construction, heating, sanitation, criminal background checks for home workers and more.

Artesia Republican James Townsend, a member of the House Health and Human Services Committee, said he was concerned about the conditions in boarding homes, but also about the cost of re-regulation as the Legislature continues to face a state budget crunch.

The Health Department has projected re-regulation would cost $4.8 million over three years, but Armstrong and other committee members dismissed that estimate as too high.

The department also has said it is concerned that many boarding homes would be unwilling or unable to meet licensure requirements and would close.

An attorney for the state long-term care ombudsman told the Health and Human Services Committee that the agency has no position on the legislation. However, according to a legislative analysis of the bill, the ombudsman office has said it would not be financially feasible for it to advocate on behalf of boarding home residents.