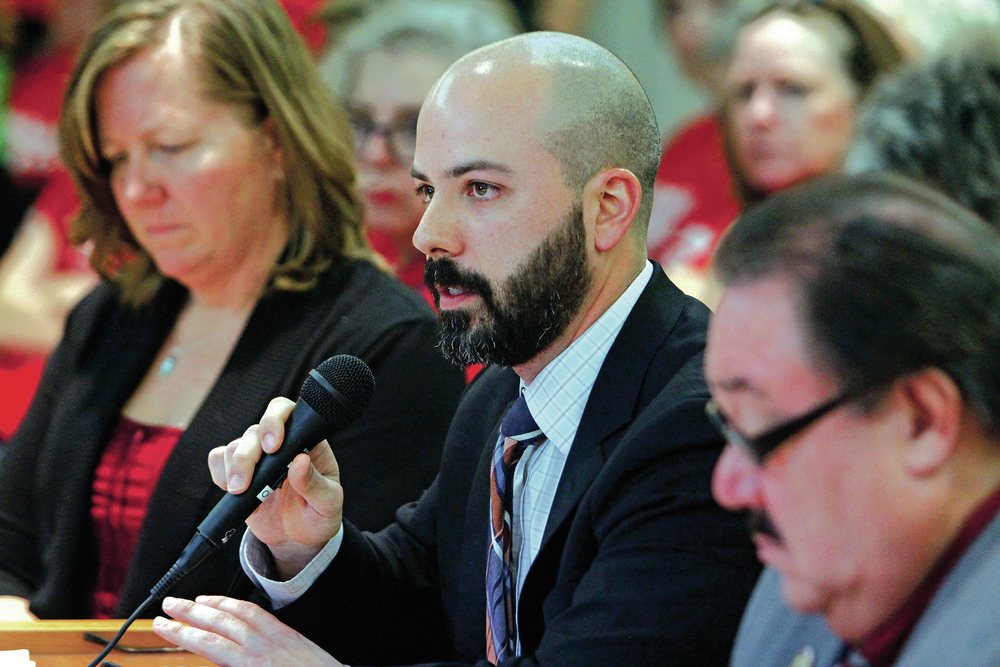 Pedro Morillas, regional director of Everytown for Gun Safety, speaks in support of Senate Bill 48 at the Roundhouse on Tuesday. The bill cleared the Senate Public Affairs Committee on a party-line vote.

A state Senate committee listened to an hour of emotional testimony Tuesday, then voted 5-3 on party lines to advance a bill expanding background checks for people buying guns.

The packed hearing room included a sea of red T-shirts worn by members of a gun safety advocacy group called Moms Demand Action for Gun Sense in America. Many people fighting the measure also turned out, including a group of law enforcement officials who wore stickers announcing their opposition to Senate Bill 48 and the identical House Bill 50, which is scheduled for its first committee hearing Saturday.

People on both sides of the issue shared personal stories with the Senate Public Affairs Committee about how violence has adversely affected their lives.

Robin Brulé of Albuquerque, who supports expanding background checks, recounted how a robber shot and killed her mother, a 75-year-old retired teacher, last year in Arizona. A friend also died in the shooting.

“You never think it’s going to happen to your family,” Brulé said.

Brulé said she and her husband own guns and she doesn’t want to take away guns from law-abiding people. “But it’s too easy for felons, domestic abusers and the mentally ill to get guns.”

Another supporter of the bill, retired Albuquerque police detective Nelson Sanchez, said too many police officers in this state have been killed by people who should not have had guns. He said he was on the police honor guard, a ceremonial unit whose duties include attending police funerals. Handing a flag to a fellow officer’s widow “leaves a hole in your heart,” Sanchez said. “I’ve been to too many police funerals.”

On the other side of the issue was Sen. Craig Brandt, R-Rio Rancho. He told of his sister being a victim of domestic abuse, so he trained her how to use a gun.

Brandt said the bill by Sen. Richard Martinez, D-Española, would make people such as his sister less safe because the restrictions in the bill would make it harder for people to quickly transfer guns to domestic abuse victims who need them.

The Senate committee divided along the same boundaries, Democrats voting for the bill and Republicans opposing it.

Santa Fe Mayor Javier Gonzales said he supports the bill as a matter of public safety. Another elected official, Cibola County Sheriff Tony Mace, opposed it. Mace said some of the provisions would be impossible to enforce.

SB 48 would require buyers of firearms — including those at gun shows and on the internet — to go through licensed gun dealers.

Under the bill, most gun sales would require a background check. Exceptions would be transfers between family members and temporary transfers of firearms while hunting, target shooting at gun ranges or between law enforcement officers.

Nancy Bennett, co-owner of Shooting Star Firearms Training in Santa Fe, said that under the bill she would have to go through background checks every time she let one of her students use a gun belonging to her or her business partner. Getting the checks cost between $25 and $50, she said. Because her classes are held on public lands instead of at a firing range, she wouldn’t be covered under the exception in the bill for firing ranges.

Sen. Jeff Steinborn, D-Las Cruces, pointed out that temporary transfers would be allowable under the bill as long as the gun owner was present when the gun was being used by another person.

But Steinborn said that, even though he supports the bill, the legislation needs some work. For instance, he suggested the section that exempts family members from background checks should be broadened.

The bill next goes to the Senate Judiciary Committee.