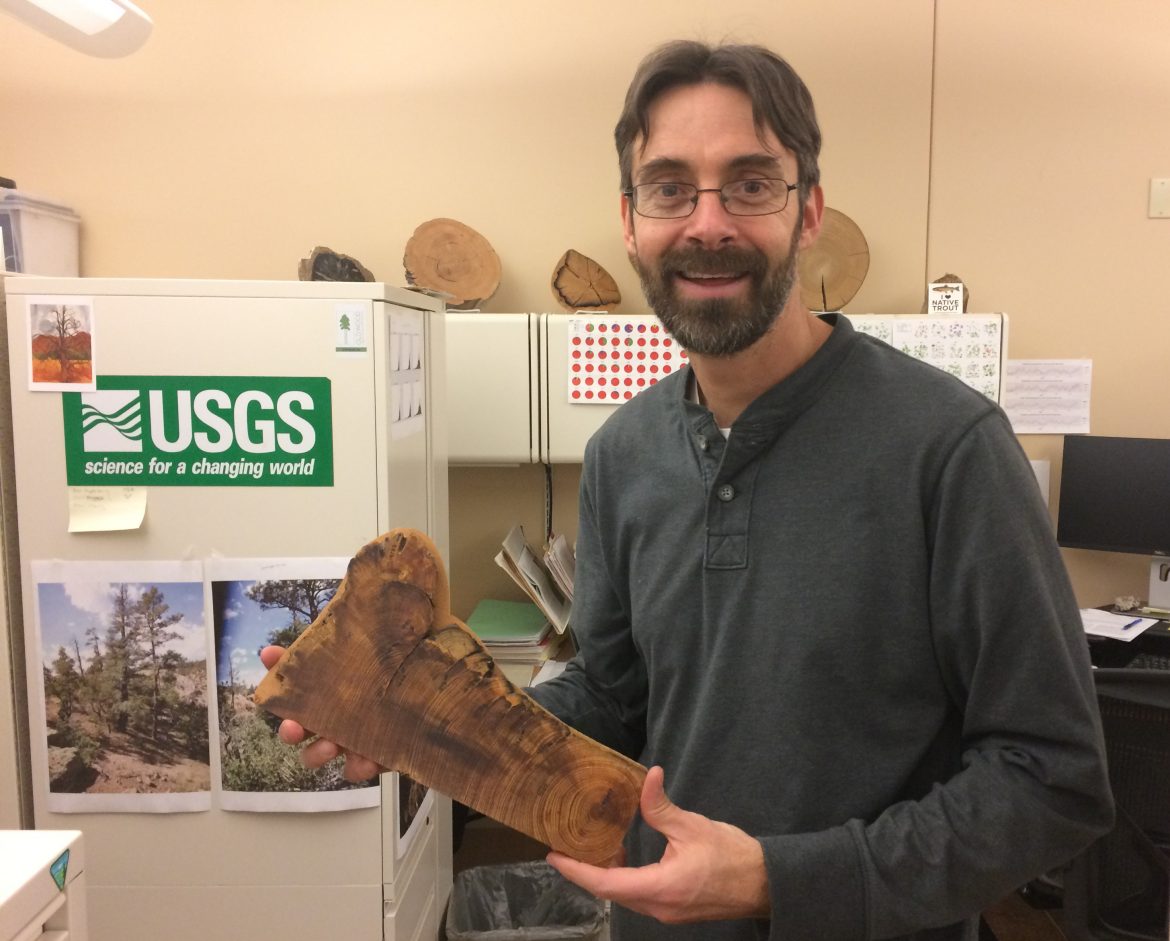 As political winds blow and funding for research ebbs and flows, communities still have to prepare for wildfires. Like the kind of devastating fires New Mexicans have seen erupt in recent years: Las Conchas in the Jemez Mountains in 2011, the Little Bear Fire near Ruidoso in 2012 and that same summer, the largest wildfire in New Mexico’s recorded history, the Whitewater-Baldy Fire in the Gila National Forest.

Each year they grow, trees add rings. Within the lines, those rings contain records of precipitation, fire and even insect infestations.

Scientists like Ellis Margolis study individual pieces of wood—sampled from a living tree or harvested from a long-dead trunk fallen onto stones in the forest—and compare samples with one another to understand an area’s climatic history.

Formerly of the Laboratory of Tree-Ring Research at the University of Arizona, Margolis now works for the U.S. Geological Survey, which runs the year-old Santa Fe tree ring lab as part of its Ft. Collins, Colorado Science Center.

With those records of the past, scientists can help land managers look at current and future challenges with a clear eye.

A few years ago, for example, Margolis and a colleague helped land managers and city officials better understand the types of fires that once burned throughout the different types of forest above Santa Fe in the Sangre de Cristo mountains. By studying tree ring samples, and supplementing that information with about a century’s worth of streamflow measurements from the Santa Fe River, Margolis and Jeff Balmat reconstructed a 700-year history of the watershed.

That information helped the City of Santa Fe and its partners come up with a long-term plan for the municipal watershed, including how to thin overly-dense areas of the forest that had become a fire hazard.

No one, after all, wants to see the headwaters of the Santa Fe River, which provides drinking water to the city and county, get hit by a wildfire like Las Conchas. That fire burned more than 150,000 acres—and burned so hot that now, nearly six years later, thousands of acres within the Jemez Mountains remain devoid of trees and communities downstream of burn scars are still grappling with the impacts of post-fire flooding.

Tree ring data is useful to watershed and forest managers because it gives them a history, not just of forest age, but also of how often, when and at what frequency fires burned, said Alex Puglisi, the City of Santa Fe’s source of supply manager and environmental compliance officer.

“This includes information such as cyclical periods of drought and above normal rainfall, low-intensity fires, catastrophic fire, historical wet years and dry years, their place in history, and their relationship to the present,” he said. Water managers can use that information “in planning for the severity of expected water shortages, fires and catastrophic events, as well as providing scientific evidence of historical forest and watershed conditions,” he added. “It’s a panoramic picture from the past of what we are seeing directly before us in the present.