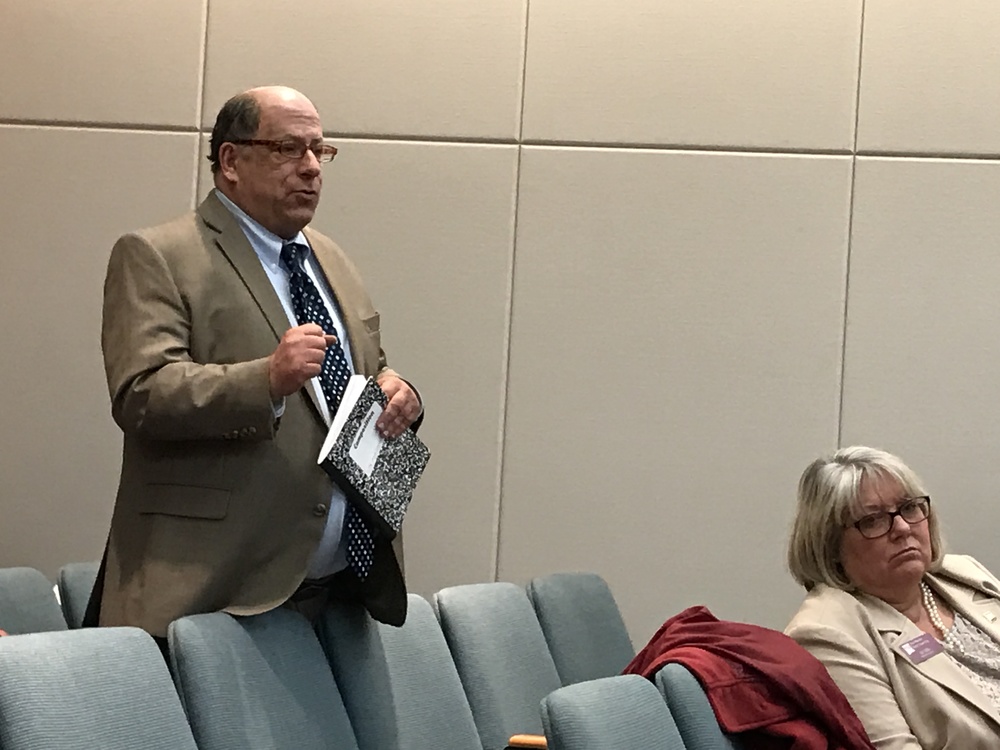 Peter St. Cyr, executive director of the New Mexico Foundation for Open Government, argues against Senate Bill 93, which would have amended the state Inspection of Public Records Act to allow state agencies to keep secret the names of job applicants. The Senate Public Affairs Committee voted unanimously to table the measure, effectively killing it. Sitting in front of St. Cyr is Liz Ellis, general counsel for New Mexico State University, who argued in favor of the bill.

A state Senate committee voted unanimously Thursday to stop a bill that would have changed the public records law to allow state agencies to keep secret the names and résumés of most job applicants.

The bill would have restricted public access to most applications for government jobs. If an applicant didn’t become a finalist for a position, the application would be kept secret forever.

Applications for many government jobs in New Mexico are public records because of a 2009 state Court of Appeals decision that forced the city of Farmington to release all applications for its city manager job.

But the public records law doesn’t cover candidates for presidencies of state universities. A separate law allows universities to keep the field of candidates secret. Typically, only the names of finalists are made public.

Muñoz argued that disclosing names in the early stages of a hiring process dissuades many qualified people from applying.

“What the press would like to do is second-guess whether the best person is getting the job,” he said. “The cost [of disclosure] is that you lose a lot of good people.”

Also testifying in favor of the bill was former New Mexico Gov. Garrey Carruthers, now president of New Mexico State University. “It’s hard to argue against transparency in government,” he said. But “non-disclosure will cause the pool to be more robust.”

As a lawyer, state Rep. Jim Dines, R-Albuquerque, battled Estes in court over public information cases. Dines said there is no data that prove keeping the names of applicants secret improves the pool of candidates.

Former legislator and former University of New Mexico regent Jamie Koch of Santa Fe said he sponsored the state’s first public records bill in 1974. “Once you start amending [the Inspection of Public Records Act], you can’t stop it,” he said.

Peter St. Cyr, executive director of New Mexico Foundation for Open Government, told the committee that the bill was an “ill-conceived idea.”

“These are public jobs. These people are applying for the privilege of working for us,” St. Cyr said.