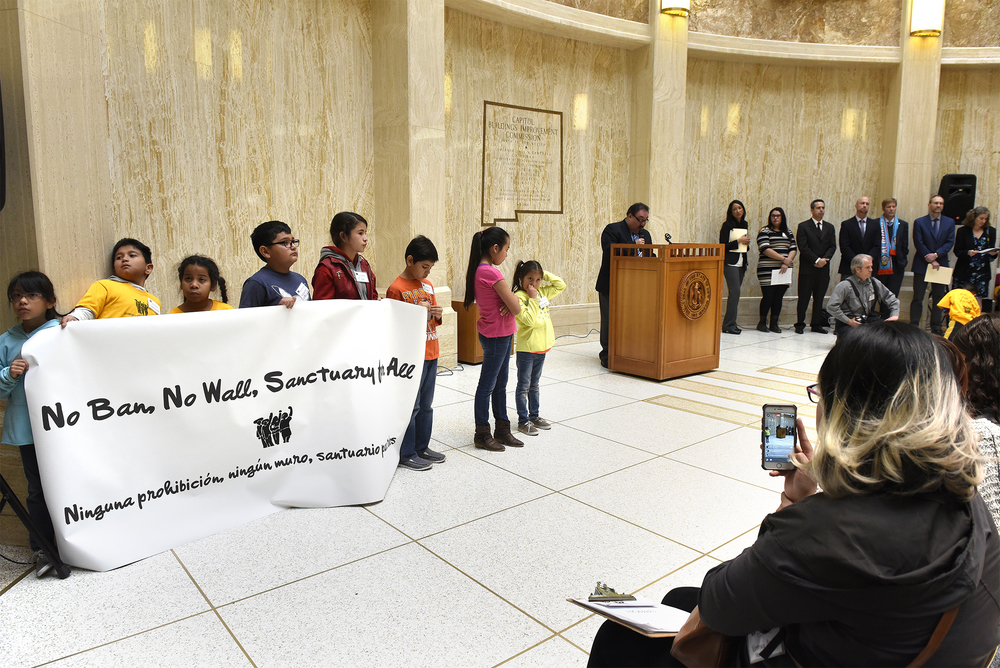 Children near the speaker's lectern hold a broad banner that reads, "No ban. No wall. Sanctuary for all."

Hundreds of people packed into the rotunda of the Capitol on Monday in an intensifying show of alarm over President Donald Trump’s clamp down on illegal immigration and his vow to build a wall between the United States and Mexico.

The demonstration reflected growing concern nationally among immigration and civil rights advocates as Trump’s flurry of executive orders in his first weeks in office have escalated to include banning refugees from seven predominantly Muslim countries from entering the United States, an effort temporarily halted last week by a federal court.

The demonstrators included immigrants here legally and illegally and scores of supporters who gathered to listen to politicians and faith leaders rail against the president’s policies. Children stood near the speaker’s lectern holding a broad banner that read, “No ban. No wall. Sanctuary for all.”

The rally came as state lawmakers are considering a bill by Rep. Patricia Roybal Caballero, D-Albuquerque, that would effectively make New Mexico a sanctuary state, despite an executive order by Trump that would end federal funding to cities and states that “willfully refuse to comply with immigration laws.” Speakers hailed New Mexico cities, including Santa Fe and Taos, that have vowed to remain sanctuaries for immigrants in the face of those threats.

Hundreds filled the Capitol rotunda during an Immigrant Day rally.

These policies are “a declaration of war on our values,” said Joseph Maestas, a Santa Fe city councilor.

Maestas exhorted those at the rally “don’t get angry. Take action.”

Sen. Tom Udall, D-N.M., who was at the Roundhouse to speak to lawmakers, told the gathering that under Trump’s edicts “we are pitting communities against each other and we’re erecting a wall that won’t secure our borders and will cost billions of taxpayer dollars and risk the relationship with one of our closest allies, Mexico.”

Trump has signed an executive order to build a wall between the U.S. and Mexico, and make Mexico pay for it. The executive order also gives the Department of Homeland Security six months to study a way to stop all unlawful immigration and he’s threatened to levy a tariff of up to 20 percent on Mexican goods.

Speakers warned the wall and tariffs would impact the brisk international trade between New Mexico and Mexico, especially at the Santa Teresa port of entry near El Paso, Texas.

Martinez said New Mexico is home to 200,000 immigrants from Latin America who make up 13 percent of the state’s total workforce. Those immigrants, documented and undocumented, work on farms, in the oil fields, in construction, and caring for the elderly and young, he said. A 2012 report by the Pew Hispanic Center put the number of undocumented immigrants in New Mexico at about 70,000, or about 3.4 percent of the state’s population.

Coss went on to say while the state was falling behind economically, Martinez focused her energy on removing the ability of undocumented immigrants to obtain driver’s licenses. “That was racist and that was wrong,” Coss said.

Sanchez later tweeted, “His claim? That she passed the driver’s license bill — even though an overwhelming majority of Hispanics supported it.”

Immigration attorney Allegra Love, founder of Santa Fe Dreamers Project, was at the rally. She offered suggestions on changing immigration policies and law. She said first, it would help if people stopped looking at undocumented immigrants as criminals and viewed them instead as resources.

Under the current immigration system, she said, “There are x number of visas for x number of countries in x number of categories. You make your application and you get in line.”

She said some immigration categories are so over-prescribed that now she has to tell applicants, regardless of their reasons for wanting to come to the United States, that it could take two decades for them to get legal visas. “If you understand the forces that cause migration and you compare them to the system where it takes 20 years, the system is no longer responsive to the causes – famine, regime change, war, violence, economic devastation,” she said.

Permanent visas for low skilled workers, for example, are capped at 5,000 a year, according to the Migration Policy Institute. Temporary work visas, which must be reapplied for every three years, for non-agriculture workers is capped at 66,000, spread out among 59 countries.

So why do people risk coming illegally? Love gave Venezuela as an example, a country in dire economic turmoil, where the cost of basic foods have spiraled beyond the ability of people to buy them. “Food insecurity isn’t a category for a refuge, you have to immigrate,” she said.

Even if you have a relative legally living in the United States who applies on your behalf, it is a 13 year wait, Love said. “And you’re struggling to get food in the meantime.”

Congress could simply change the number of visas offered. “What about instead of thinking of them as criminals, we thought of them as potential talent for our work force or people who make our country more culturally diverse,” Love said. “Then we ask, how do we bring these people to small towns where we have job loss. Properly integrated immigrants create jobs, they own businesses, they improve tax bases.”