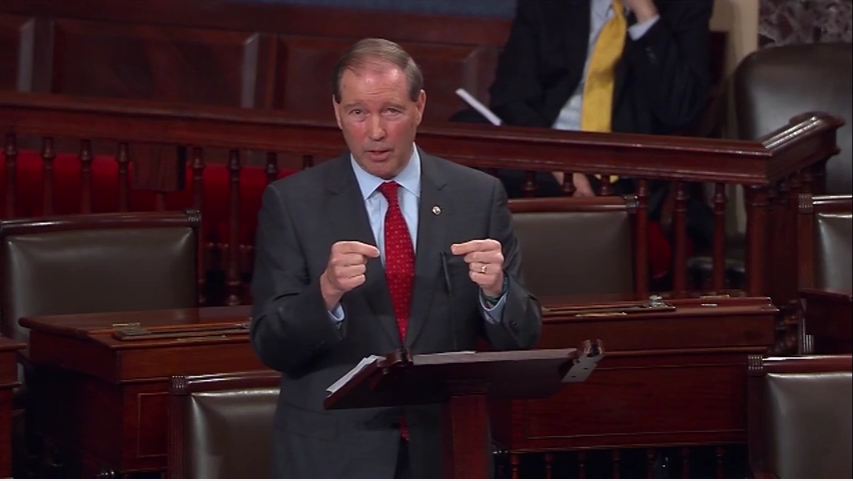 screenshot of Sen. Tom Udall reading a letter by Coretta Scott King on the Senate floor when opposing the nomination of Jeff Sessions for U.S. Attorney General.

Hours after Massachusetts U.S. Sen. Elizabeth Warren was reprimanded for challenging the integrity of a fellow Senator by reading a letter from Coretta Scott King, the widow of Martin Luther King, Jr., New Mexico U.S. Sen. Tom Udall read the letter on the Senate floor without question.

Later on Wednesday, new Mexico’s other U.S. Senator read part of the Coretta Scott King letter and criticized the Senate for their actions on Warren.

Tuesday night, Warren tried to read the letter before her senate colleagues. King’s letter  criticized Attorney General nominee Jeff Sessions when he unsuccessfully sought a judgeship in the 1980s.

In the letter, Coretta Scott King said she opposed his confirmation to a federal judgeship.

“Anyone who was used the power of his office as the United States Attorney to intimidate and chill the free exercise of the ballot by citizens should not be elevated to our courts,” she wrote in a letter, while attaching a statement. “Mr. Sessions has used the awesome powers of his office in a shabby attempt to intimidate and frighten elderly black voters. For this reprehensible conduct, he should not be rewarded with a federal judgeship.”

“She was warned. She was given an explanation. Nevertheless, she persisted,” McConnell said.

In voting to rebuke Warren for reading the letter, Senators blocked Warren from participating in the floor debate ahead of Sessions’ nomination. A total of 49 Republican senators, all Republicans, joined the vote to silence Warren.

The Senate is expected to confirm Sessions Wednesday.

The Washington Post posted the full ten-page version of the letter and statement online last month.

After Udall, Sens. Sherrod Brown, D-Ohio, and Bernie Sanders, I-Vermont, also read the letter. Like Udall, Brown and Sanders were not reprimanded.

I read Mrs. King’s letter about Mr. #Sessions’ commitment to justice for all. I leave it to my colleagues to assess that commitment.

Update 3: Added video of Heinrich reading a portion of the speech.

Correction: This story originally said Sen. Tom Udall was the first Democrat to read the letter on the floor. Sen. Jeff Merkley read portions of the letter Tuesday night.