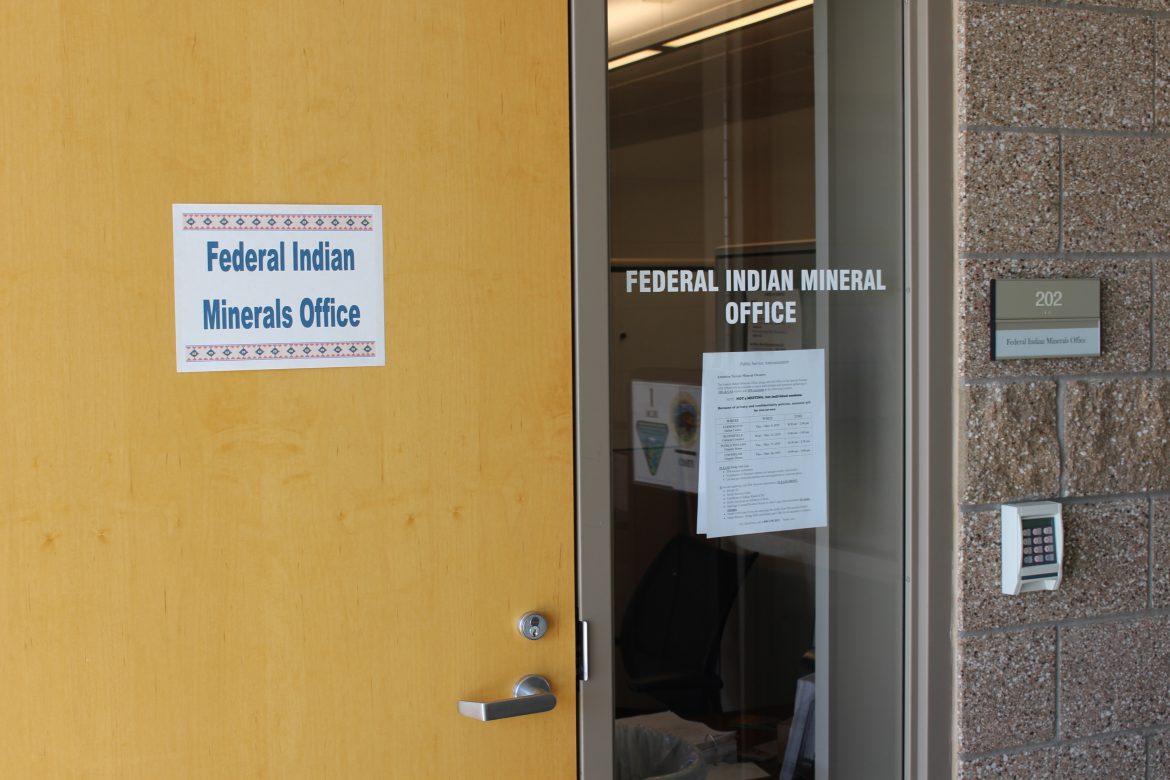 A newly released federal audit points to continued problems in how the federal government manages oil and gas leases and payments for some Navajo families, including in New Mexico.

In the 19th century, the federal government deeded some lands within the boundaries of the Navajo Nation to individual families.

Families can choose whether or not to allow oil and gas companies to drill on those lands, called “allotments,” which are not overseen by tribal government.

Instead, the leases and permits for those wells are handled by the Federal Indian Minerals Office. Based in Farmington, FIMO also oversees royalty payments.

Longtime activist Mike Eisenfeld with the San Juan Citizens Alliance isn’t surprised by the problems revealed in the U.S. Office of the Inspector General’s audit.

“It’s a reminder of the historic, institutional biases that have guided energy development up here,” he said. “What the Inspector General report describes is utter dysfunction and utter disdain for environmental and social justice issues.”

He pointed out that the two agencies the audit highlights as failing to communicate with one another—the Bureau of Land Management and FIMO—share an office building in Farmington: “Obviously, there is some institutional barrier.”

The U.S. Department of the Interior created FIMO 25 years ago after the agency was sued for not making timely royalty and lease payments to Navajo allottees.

Today, the office is supposed to work with three other federal agencies, the Bureau of Indian Affairs, the Bureau of Land Management and the Interior Department’s Office of Natural Resources Revenue.

A 2005 agreement among the four agencies gave FIMO certain responsibilities, including permitting, inspecting and enforcing oil and gas leases on allottee lands, holding companies accountable for production and making sure companies comply with royalty payment rules.

But according to the audit, FIMO is not meeting the requirements of that 12-year-old agreement.

Auditors say that’s in part because the agreement is outdated and also because there’s not oversight from the agency’s Executive Management Group.

Auditors found internal disagreements regarding operations, ineffective coordination and communication, unreconciled oil and gas leases and an absence of audit and compliance plans for the allottees’ leases.

Inspectors also noted that FIMO and its three partners—ONRR, BIA and BLM—don’t coordinate outreach efforts with one another or work together to answer allottees’ questions.

The 2005 agreement required these steps.

According to the audit, in 2015 FIMO distributed $96 million to about 20,835 individual Navajo allottees.

According to the audit, in 2014 BLM management directed inspectors to report to the agency’s Farmington Field Office instead of to the FIMO director. As a result, wrote auditors, the two offices don’t communicate about inspection and enforcement activities on Navajo allottee leases, or even discuss how often inspections occur.

Meanwhile, BLM officials in New Mexico pointed out that the agency’s responses to the Office of the Inspector General are included at the end of the audit.

Some of those responses include agreeing to inspect 100 percent of the allottees’ properties each year and providing FIMO with inspection and enforcement reports each month.

BLM’s New Mexico State Office spokeswoman Donna Hummel said that “here in New Mexico, we haven’t had a chance to gather as a team, and we will stand by the recommendations summary in the report.”

Not long after it became a permanent office in 2001, FIMO’s problems started to become clear.

Some of those came to light after a U.S. District Judge appointed an attorney to investigate the Interior Department’s practices as part of the Cobell v. Norton lawsuit.

In the 1990s Eloise Cobell, a member of Montana’s Blackfeet tribe, brought a class action lawsuit against the Interior Department, alleging that the federal government had mismanaged the Indian trust accounts of more than 300,000 people.

Because reservation lands are held “in trust” by the federal government, the Interior Department is supposed to negotiate leases and make payments to tribal members.

During his investigations, court-appointed attorney Alan Balaran learned that BIA officials were paying Navajos less than non-Native landowners for pipeline leases across their property. In some cases, oil and gas companies paid Navajos 20 times less than they paid non-Indians.

Balaran learned much of that information from Kevin Gambrell, who in 2003 was director of FIMO.

Shortly after Gambrell blew the whistle on those practices, the Interior Department placed him on administrative leave for “insubordination.” He was eventually fired.

Balaran eventually resigned from the case, claiming in a letter to the judge who had appointed him that the Interior Department manufactured a campaign to disqualify him as he continued to discover systemic problems with the federal government’s management of Indian trust money. In that letter, he wrote that he was uncovering “evidence that Interior was putting the interests of private energy companies ahead of the interests of individual Indian beneficiaries.”

Eventually, the case settled in 2009 and the Interior Department created a $1.9 billion fund to compensate tribal members and resolve potential claims. The department also authorized $60 million for scholarships for Native students.

The final deadline for Cobell claimants to submit documents is in November 2017.

In 2014, Gov. Susana Martinez tried to forge a partnership with FIMO that would allow San Juan College to take over some of its duties and expedite permit approvals for drilling on Navajo allotments. Martinez blamed sluggish development on the eastern Navajo Nation on federal budget cuts, saying that FIMO wasn’t able to process permit approvals quickly enough. At the time, she said the agreement could generate more than 1,000 jobs and provide revenue to 60,000 allottees.

FIMO’s director at the time praised the deal, but oil prices subsequently dropped and drilling in the area slowed.