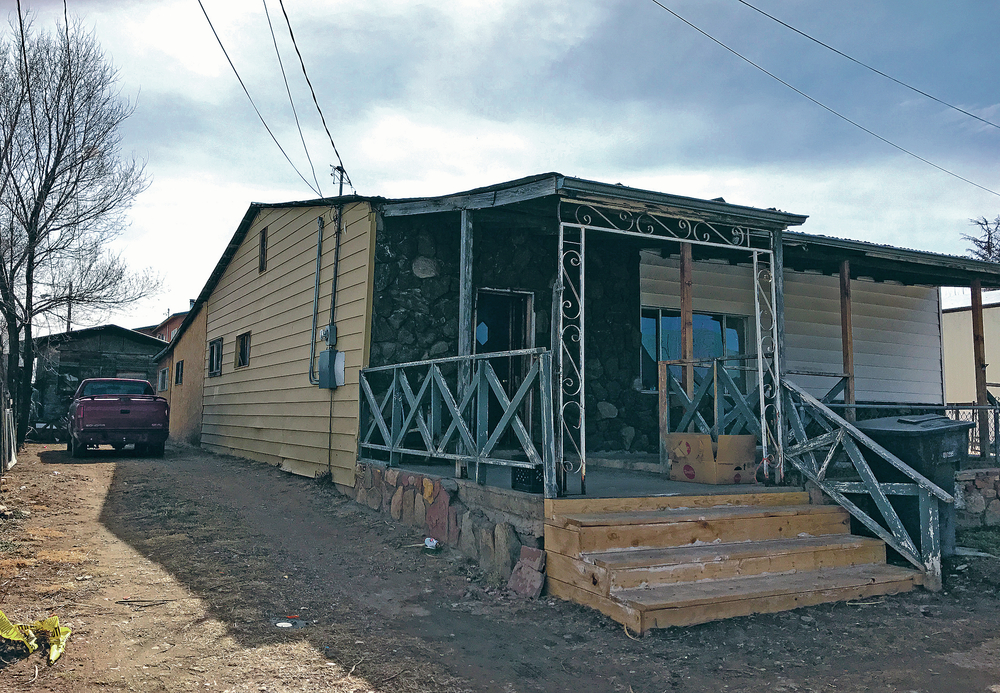 LAS VEGAS, N.M. — The Loving Care Shelter Home, one of several private homes in Las Vegas that has provided room and board for people with mental illness, is a ramshackle place between a mobile home and a burned-out house in an old neighborhood near downtown.

Inside the home, according to a recent state inspection report, residents lived in filth, with paint chipping off walls, stained and threadbare rugs, torn window screens, electrical hazards, a rickety wooden front porch with an old couch with cigarette burns and piles of debris in the backyard.

The medical care of the five residents at the Loving Care Shelter Home was shoddy, as well, according to the 96-page report by the state Department of Health on the home’s deficiencies. Among other problems, residents didn’t get required medical checks, and there were no plans to manage their illnesses, the report says. The home’s two staff workers weren’t trained in how to store drugs and assist residents with their medications.

The inspection report’s bottom line when it came to conditions at the home: a potential for residents “to be at risk of injury, illness and death.”

The report offered a rare window into the troubled network of largely unregulated private residences in the Las Vegas area and elsewhere that serve as boarding homes for people with mental illness. The Health Department regulates and inspects boarding homes only if they are also licensed as assisted living facilities.

The Loving Care Shelter Home was the only boarding home in Las Vegas licensed as an assisted living facility, meaning it was approved to assist residents with activities of daily living, which are defined as eating, dressing, oral hygiene, bathing, grooming, mobility or toilet use. It surrendered its license following the inspection.

The state stopped regulating boarding homes in 2000, but some homes in Las Vegas remained temporarily licensed after that as assisted living facilities. Las Vegas is the site of the state’s only public psychiatric hospital, and the hospital discharges about 200 patients into the community each year.

For at least the third time in recent years, state policymakers are considering reinstituting regulation of boarding homes. Legislation introduced in the House this year would require state registration of boarding homes that provide personal care services and give local governments the option of imposing state-created standards.

Supporters of the legislation say the services provided to people with mental illness are too critical to go without government oversight.

“We as a state have an obligation to look after them because many of them can’t look after themselves,” said Ellen Pinnes, a consultant with the Disability Coalition, a collection of advocacy groups for the disabled.

The legislation comes in the wake of a string of disturbing reports about the conditions of some homes.

In 2013, two men released from the state mental hospital died of carbon monoxide poisoning while a Las Vegas boarding home operator was charging them a total of $1,100 a month to live in a backyard shed.

The fire department has been unable to detect a carbon monoxide problem at the home or identify a possible source. The findings of an autopsy on the man who died haven’t been released.

There also have been reports of boarding home residents living in crowded and substandard conditions and going hungry because of inadequate meals. Violence and drug and alcohol abuse have been reported in homes, as has financial exploitation of residents by home operators. In exchange for a bed and meals, many boarding home residents turn over their monthly disability checks of about $750 each in federal Supplemental Security Income to operators.

The Health Department completed its survey of the Loving Care Shelter Home in October, two weeks after a report in the Albuquerque Journal showed the department hadn’t conducted a full inspection of the home in nine years. The previous full inspection in 2007 also found numerous problems.

Among other problems listed in the inspection report, the home’s staff failed to give one resident two prescribed antipsychotic drugs. Another resident was wrongly given daily doses of an arthritis drug. Medications were stored in a kitchen refrigerator.

The inspection report also found a laundry list of other troubles at the home, including a lack of criminal background checks for the staff and a lack of employee training in fire safety, medical emergencies, food handling and resident rights.

The overnight staff worker slept during her shifts, the report says. The house manager commingled residents’ money in her purse.

All residents were moved out after the home surrendered its assisted living license, according to the Health Department. However, without correcting the problems cited by the department, the home can continue to operate as a boarding home as long as it doesn’t provide assistance with activities of daily living.

A telephone number for the Loving Care Shelter Home is no longer in service, and no one answered the door at the home on a recent afternoon. Some improvements to the home were evident. The front porch had new wooden steps, the old couch was gone from the front porch, and debris on the side of the home had been removed. The listed owner of the home couldn’t be reached for comment.

State Rep. Deborah Armstrong, D-Albuquerque, introduces House Bill 85, which would require boarding homes to register with the state Department of Health if they provide personal care services, during a meeting of the House Judiciary Committee at the Roundhouse on Friday.

The Health Department says it doesn’t have the legal authority to oversee the homes because they aren’t health facilities, as defined by state law. Advocates for people with mental illness disagree with the department’s interpretation of state law, but the bill pending before the Legislature would make it clear the agency has a role.

Under the legislation, House Bill 85, a boarding home would be required to register with the Health Department if it provides personal care services, such as assistance with meals and medications. The home would have to provide its owner’s name, the number of residents and the address. Currently, because of the lack of state regulation, no one knows how many homes there are or where they are all located.

Also under the bill, if a boarding home assists residents with medications, it would be required to provide proof that it had the required permit from the state Board of Pharmacy to store and dispense drugs. Many homes assist residents with medications but don’t have the permits, which mandate that homes have safeguards for storage and administration of drugs, reducing the chances of medication errors and drugs being diverted for abuse by other residents or home operators.

The legislation, which is modeled after the regulatory scheme for boarding homes in Texas, requires the Health Department to set standards for homes that local governments could adopt and enforce but wouldn’t be required to do so. Those standards would deal with such things as construction, heating, sanitation, criminal background checks for home workers and more.

With the state mired in a budget crisis, it would be a hard sell to convince lawmakers to appropriate money to the Health Department to regulate boarding homes on its own. The bill’s sponsor, Rep. Deborah Armstrong, D-Albuquerque, told the House Judiciary Committee on Friday that she is aware of that reality and that is why the legislation proposes only state registration and optional local regulation.

Even if local governments don’t adopt the boarding home standards, the state would start to get a handle on boarding homes, including their owners and locations, Armstrong said.

Two Las Vegas boarding home operators and several residents spoke against the legislation, saying they fear the bill, if enacted into law, could result in some homes closing their doors because of the cost of compliance with the regulations.

“If it wasn’t for the home I have, I wouldn’t have a home,” one resident said.

The home operators said they provide good care for residents, although they acknowledged a few may not.

In addition to cost, another long-running concern about regulation of boarding homes is that it could lead to some residents being put out on the street, where finding their next meal and place to sleep — instead of taking their medications — would become the priority. There already is a widely acknowledged shortage of group homes for people with mental illness in New Mexico.

The Judiciary Committee unanimously approved the legislation Friday, setting it up for a vote by the full House.

Committee Chairwoman Gail Chasey, D-Albuquerque, said that before the Health Department could set standards for boarding homes, and again before any local governments could adopt them, there would be public hearings for home operators to express their concerns about overregulation.

Las Vegas Mayor Tonita Gurule-Giron and other Las Vegas officials urged the Judiciary Committee to approve the legislation, saying they can’t now even force a boarding home to have a fire inspection. Boarding homes in Las Vegas are required to have business licenses, but few do.

“My hands are tied right now,” Annette Velarde, director of the city’s Community Development Department, told the panel Friday. “We in Las Vegas need to know who is serving our most vulnerable people.”