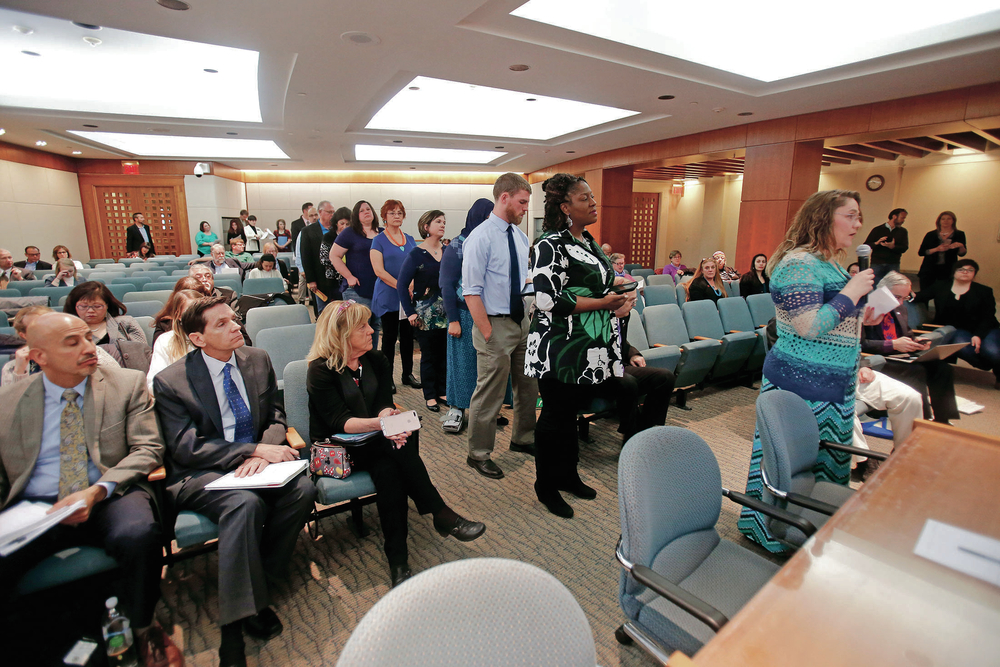 A bill backed by Gov. Susana Martinez that would give slightly less weight to students’ standardized test scores in grading teachers sputtered in a legislative committee Saturday as Democrats sought a broader overhaul or outright scrapping of the controversial evaluation system.

The House Education Committee deadlocked along party lines on the bill, which would have turned the teacher evaluation system from a rule imposed by Martinez’s administration into a law.

The impasse on House Bill 350 casts doubt on the future of the evaluation program because it would be easier for a future governor or the Public Education Department to change or replace it.

Frustrations with the state’s evaluation system for teachers were obvious during more than three hours of sometimes tearful testimony. Teachers and administrators said the program relies too heavily on students’ standardized tests, fails to consider much of the work they do and unfairly draws comparisons between very different classrooms.

Jennifer Settle, a special education teacher from Clovis, described the program as virtually stacked against her as it measures her work with children with disabilities.

“I work myself to death to see a year’s growth in students that have traumatic brain injuries,” she said.

Under the evaluation system, Settle said, she can only expect to receive an average rating even in an outstanding year.

Other teachers said the emphasis on testing is driving their colleagues from the profession.

Still others cautioned against throwing educators into uncertainty by creating a completely new program, saying the current system could work if better if it were refined to give less weight to testing.

Several school administrators argued against placing any system into law and urged legislators to give them greater leeway in choosing what to measure and how to measure it.

“This needs to be flexible,” said Kirk Carpenter, superintendent of the Aztec Municipal School District.

The Republican sponsors of House Bill 350, Reps. Monica Youngblood and David Gallegos, said it represented a reasonable compromise by reducing the importance of standardized testing in teachers’ evaluations. Public Education Secretary Hanna Skandera said last month she supported the bill, under which testing would account for about 40 percent of evaluations rather than 50 percent.

Democrats and several teachers said that would still place too great an emphasis on annual exams. And it would have changed little else about the current, controversial system.

Democrats and teacher unions have assailed the Public Education Department’s evaluation program since it was first implemented by rule in 2012 after similar proposals did not clear the Legislature.

Unions sued in 2014, arguing the system puts teachers at risk of being punished or fired based on a flawed methodology. State District Judge David Thomson of Santa Fe granted an injunction in 2015, barring Martinez’s administration from making any consequential decisions about teachers based on the annual evaluations. A trial is scheduled for later this year.

Legislators will take up several other bills this session to change the state’s teacher evaluation system.

House Bill 248 by Rep. Christine Trujillo, D-Albuquerque, would end the use of test scores and certain teacher absences in teacher evaluations.

House Bill 158 by Democratic Rep. Stephanie Garcia Richard, a teacher from Los Alamos and chairwoman of the House Education Committee, would allow a select group of school districts to design what the legislation describes as fair and equitable evaluation systems.

And the Education Committee voted 9-2 to advance a bill that would ensure teachers are not penalized on their evaluations for taking certain amounts of personal and sick leave. Sponsored by Rep. Jason Harper, R-Rio Rancho, and known as the Teachers are Human Too Act, House Bill 241 would address concerns raised by teachers fearful of losing points for falling ill or caring for a family member. That bill goes next to a vote by the full House of Representatives.

Republicans said Martinez might reject too broad an overhaul.

“I look at this bill as a compromise,” Gallegos told the committee, referring to House Bill 350, which is backed by the public education secretary.

But Democrats replied that, because the current system is not enshrined in law, the governor can change it without the Legislature’s approval. If the Martinez administration wants to give less weight to standardized tests, it can change the rules on its own.