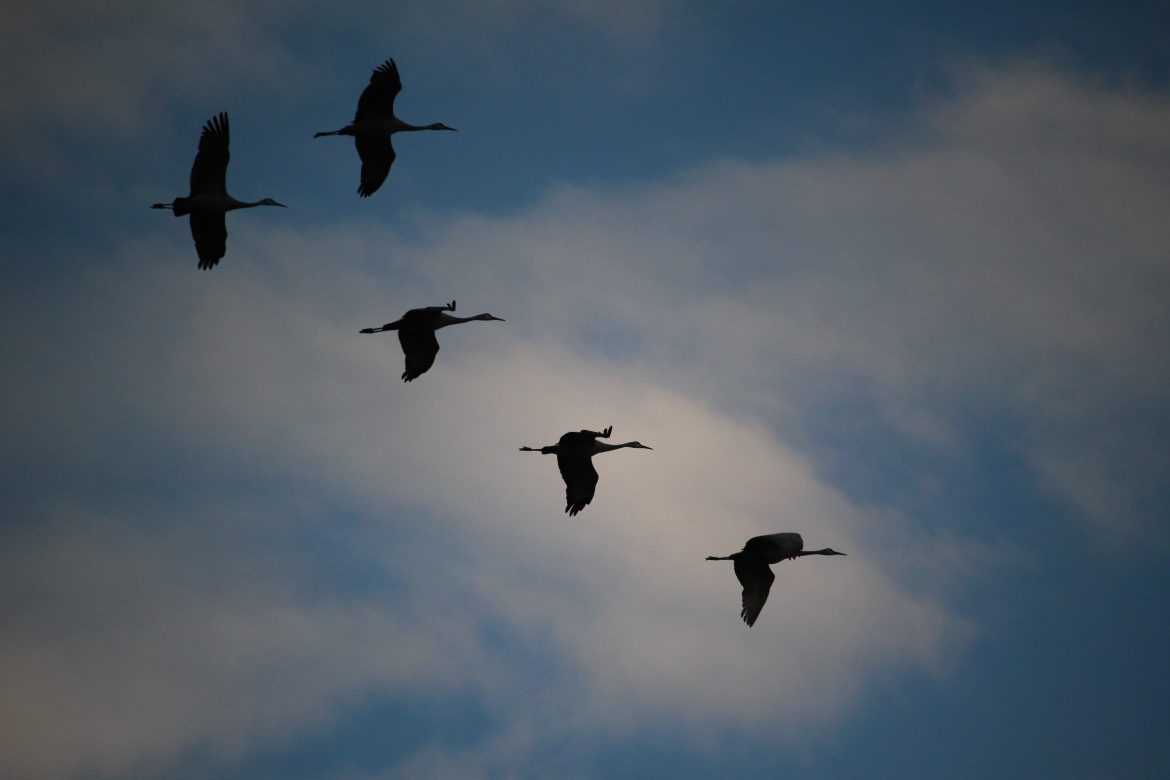 Should we start off the weekly environmental news wrap up nice and easy?

If you haven’t gotten out to the Rio Grande, including Bosque del Apache National Wildlife Refuge, to see the sandhill cranes, you might want to do that as soon as possible. The birds are starting their migrations north—and won’t be back to New Mexico until November.

Now, for the rest of the news and some newly-released studies. There is a lot happening across New Mexico, especially when it comes to issues like nuclear facilities, state agencies and the Trump administration’s impact on rules and regulations.

The Defense Nuclear Facilities Safety Board found the lab had more than 20 “criticality” safety infractions in fiscal year 2016. Most of those were self-reported by lab staff. According to the story:

The lab was the only one among some two dozen nuclear facilities operating within the Department of Energy to receive a failing grade of “red.” Two others received “yellow,” defined as “adequate but needs improvement.” The rest were rated “green,” meaning they met or exceeded expectations.

The Defense Nuclear Facilities Safety Board posts resident inspector reports of the lab and other nuclear weapons facilities each week. Those can be found online here, though as of today, the last listed report is from Jan. 13, 2017.

Meanwhile, in southern New Mexico the Carlsbad Current-Argus reports that WIPP won’t be at full capacity for months. The underground nuclear waste dump reopened earlier this year after an accident three years ago Tuesday.

WIPP still has two- to three-months worth of nuclear waste aboveground. Only after that has been moved underground can new shipments resume.

Waste is being emplaced in Panel 7 of the underground mine, Shrader said, where officials estimate there is enough space for waste can be emplaced for another three years.

Two rooms are prohibited for use in the panel after roof collapses earlier this year made them unusable, he said.

After Panel 7 is full, Shrader said workers would begin building out Panel 8 in the underground. He said the plan is for construction on Panel 8 to begin in 12 to 14 months.

In case you missed any of NM Political Report’s own environment stories, head over to https://nmpoliticalreport.com/category/environment/ for the full archive.

During that interview, Tongate expressed confidence “that they are back on track and ready to go.” But, as the story notes, “NMED officials couldn’t provide specifics about how changes to policies and procedures would prevent problems like the 2014 radiation release.”

In case anyone has forgotten New Mexico’s long, long history with nuclear weapons and waste, on Friday, the Tularosa Basin Downwinders Consortium released an 86-page report examining the health impacts of atomic bomb tests on New Mexicans in the 1940s.

According to the report:

In 2015, New Mexico’s federal congressional delegation co-sponsored bills in the Senate and House of Representatives that would include Trinity Test downwinders under the Radiation Exposure Compensation Act, which helps weapons workers who can prove they’ve been sickened by radiation exposure. That legislation did not pass.

According to the Roswell Daily Record, Gandy Marley, Inc. asked the New Mexico Environment Department to renew its permit to build a hazardous waste landfill just off Highway 380 in southeastern New Mexico.

The public comment period for the Triassic Park Hazardous Waste Facility ended last month. Next, NMED will evaluate concerns and decide whether or not to hold a public hearing on the permit.

As we reported last month, EPA recently resolved a 15-year old civil rights complaint against NMED for its earlier approval of the permit for the Triassic hazardous waste landfill.

According to that agreement, NMED will designate a non-discrimination coordinator to oversee application and permit procedures, create and enact plans that increase opportunities for non-English speakers to participate in the public comment process and train employees to avoid discrimination.

Catching up on EPA’s regulatory freeze

Whenever an agency proposes a new rule, it has to be listed on the Federal Register.

At the end of January, the register included notice of a new rule from the U.S. Environmental Protection Agency. This new role postpones all regulations that had been published in the Federal Register but hadn’t yet taken effect.

Some of the now-delayed rules that would have affected New Mexicans include:

–Revision of an existing rule related to radon emissions from uranium mills. Under the changes, the rule applies not just to mill tailings, but also to in-situ uranium and heap leach facilities, like those proposed for western New Mexico.

–Rule improving safety at facilities that use and distribute hazardous chemicals. This rule was in response to a 2013 explosion at a fertilizer facility in west Texas.

–Rule to reduce formaldehyde emissions from composite wood products like plywood, fiberboard and the products made from them.

-Amendments to the EPA’s Risk Management Programs. These changes increase emergency preparedness at facilities with hazardous chemicals. The rule’s provisions also include helping local emergency authorities plan for and respond to accidents.

Now, according to a story in the Santa Fe New Mexican, Game and Fish has filed a lawsuit, seeking a judgement that it acted properly by not sharing sportsmens’ email address.

Um, about that border wall…

Last week, Smithsonian Magazine published a thoughtful story about the realities of building a “big, beautiful” new wall along the U.S.-Mexico border.

Today, the border fence includes about 650 separate segments; the replacement wall would be a 20-50-foot concrete structure stretching about 1,000 miles.

In its story, the magazine compares the wall’s construction with other architectural feats like the Great Wall of China and the Tower of Pisa.

From the story, “What Geology Has to Say About Building a 1,000-Mile Border Wall,” which is well-worth reading in its entirety:

Before a single brick is laid, teams of scientists assemble on scene to investigate a litany of details, from bedrock depth to soil chemistry. In the case of the border wall, they would have to traverse the entire length of the proposed path, working in segments to evaluate the region, collect data, develop plans. (This necessity makes the process of erecting walls—especially ones spanning thousands of miles—more challenging than building, say, a 95-story skyscraper.)

“Quite frankly, that would take years to do,” says [Gary] Clendenin, who specializes in linear projects like railways and roads. [Mika] McKinnon agrees. One project she worked on, a three-mile stretch of pipeline, is now on year five of field surveys.

Last week, the Eddy County Board of Commissioners announced it was planning to officially oppose the U.S. Bureau of Land Management’s rule to reduce the waste of natural gas from flaring, venting, and leaks from infrastructure.

According to the agency’s fact sheet on the issue, between 2009 and 2014, oil and gas producers on public and tribal lands vented, flared and leaked enough natural gas to supply 5.1 million households for a year.

A former drilling mud vendor for the oil industry when he ran a business along with his father, Marquez, an Artesia native, is now the founder of Communities for Environmental Justice, which has about 20 members. He makes it part of his life’s work to protest what he considers to be environmentally risky projects.

He also is a highly regarded public artist, a 2008 recipient of a Governor’s Award for Excellence in the Arts. He often creates murals or other works that depict the earth and the threats to its survival. Some in the Roswell area also might know him from his work with the local Arts Beyond the Classroom Foundation that promotes arts in public schools. He and local students painted the utility boxes found on downtown Roswell street corners.

Lastly, a new study shows that vegetation is slow to recover on abandoned oil and gas well pads.

But a new assessment approach can help resource managers make better decisions about where to local future well pads.

According to the U.S. Geological Survey’s release on the study, which was published in the peer-reviewed journal Science of The Total Environment, scientists studied 1,800 well pads in New Mexico, Colorado and Utah:

Findings show that most abandoned oil and gas pads in the study are characterized by more bare ground and less vegetation than surrounding undisturbed areas, even after more than 9 years since abandonment. The majority of pads had 15-45 percent increases in bare ground exposure relative to comparable nearby areas. More exposed bare ground makes areas much more susceptible to soil erosion and dust emission.