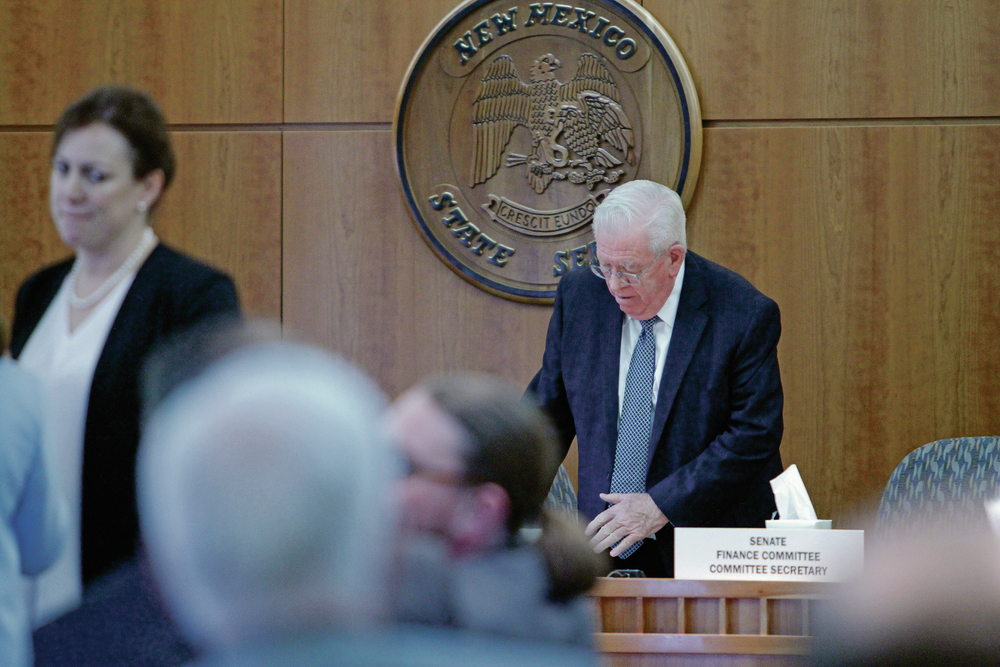 Sen. John Arthur Smith, D-Deming, prepares for a Senate Finance Committee meeting at the Capitol on Wednesday, Feb. 15, 2017. Most bills are still working their way through the committee review process.

Thursday marks the halfway point of the 2017 New Mexico Legislature’s 60-day run in Santa Fe. And while half the time is gone, perhaps 90 percent of the work remains.

All-important debates over how to spend the public’s money, where to get it and how much to keep in reserve, are yet to be resolved. How much should be devoted to keeping the schools running? What kind of tax breaks are effective in stimulating a sputtering economy? Should the state try to tax purchases made over the internet?

New Mexico’s ongoing problem with anemic tax revenues did prompt an unusual spurt of activity during the first two weeks as lawmakers in both the Senate and the House of Representatives concentrated on filling an $80 million hole in the current budget. Scraping together enough funds to get through the fiscal year that ends June 30, the Legislature passed and Gov. Susana Martinez signed three bills dealing with that deficit.

But in a rare fight over appropriating money to pay the costs of a legislative session, lawmakers twice had to pass a “feed” bill. The governor vetoed the first one in a flap over sharing the fiscal pain that elected leaders have imposed on state agencies in recent years.

Since then, however, the pace has slowed. No other bill has cleared both chambers.

Sen. Peter Wirth, D-Santa Fe, enjoys a moment on the Senate floor before the end of a floor session on Wednesday, Feb. 15, 2017, at the New Mexico Legislature.

As of Wednesday evening, the Legislature’s website listed 39 bills passed by the Senate and 26 by the House. Scores more are still grinding through the committee hearing process.

The priorities fight continues unabated as the parties try to come up with a blueprint for the fiscal year that starts July 1.

Said Sen. Carroll Leavell, R-Jal, who has served in the Senate for more than two decades, “This is so different than any of the [other lawmaking sessions], there’s no comparison.” The major difference, he said, is the “lack of money we have to work with. It’s just very difficult.”

“What I sense is that there’s a lot of movement, kind of a busy-busy kind of atmosphere, but we’re like standing still,” said Rep. Miguel Garcia, D-Albuquerque. “We’re not really hitting the goals, you know, because the issue before us is job growth and economic stimulus, and as long as we don’t have that package out there, I think we’re busy but we’re standing still.”

Part of the sense of “standing still” might have to do with the ceremonial aspects of the Legislature, which take up a lot of time in each session.

Some legislative staffers privately have complained about the large number of joint sessions in which senators sit with the House to hear visiting speakers. All five members of New Mexico’s congressional delegation have addressed joint sessions on different days, as have the chief justice of the Supreme Court and the attorney general. Other joint sessions have been called to observe Native American Day, African American Day and Hispanic Day.

Another standard practice is devoting time to non-binding memorials. The House has adopted 23 of these so far while the Senate has acted on 36.

Meanwhile, among the more high-profile legislation making its way through the committee process:

Taxes: HB 63 would allow local governments to seek voter approval for a new tax on gasoline of up to five cents a gallon to help fund road work. The bill has passed the House and awaits a hearing in the Senate Judiciary Committee.

HB 202, which would allow the state to collect gross receipts taxes from major internet retailers such as Amazon and eBay, has passed one House committee with bipartisan support and awaits action by the House Taxation and Revenue Committee.

A 300-page tax reform bill, HB 412, is set to get its first hearing in the House Taxation and Revenue Committee. The bill, which has bipartisan backing, would restore the gross receipts tax on food but at a lower statewide rate, somewhere below 3 percent. It also would eliminate most other exemptions to the gross receipts tax, including loopholes for nonprofits and internet sales, and establish a single rate of 5 percent for both corporate and personal income tax. In addition, it would earmark more money to the state road fund, local governments and Medicaid.

Funding courts: HB 261, which would appropriate $1.6 million for the state’s courts — enough to pay for jury trials through June 30 — has passed the House and is now in the Senate Finance Committee’s hands.

Gun background checks: Two bills would expand mandatory background checks of firearms sales to cover internet sales, gun-show sales and most other private transactions. HB 50, has been through the committee process and is expected to be heard on the House floor as early as Friday. The similar SB 48 awaits a hearing in the Senate Judiciary Committee.

Industrial hemp: SB 6, which would allow the state Department of Agriculture license farmers to grow hemp for research purposes, has passed the Senate and is scheduled to be heard Thursday in the House Agriculture and Water Resources Committee. The similar HB 144 cleared the House floor on Wednesday night and heads to the Senate. The House this week passed HB 166, which would exclude industrial hemp from the state controlled substance act. It awaits a hearing by the Senate Public Affairs Committee.

Marijuana: The Senate this week passed SB 177, which would allow medical marijuana patients to possess more of the herb and producers eventually to grow more cannabis. Its next hearing would come in the House Health and Human Services Committee.

HB 89, which would legalize, tax and regulate marijuana for adults over 21 in New Mexico, passed one House committee and awaits a hearing in the House Business and Industry Committee. The similar SB 278 is still in the Senate Judiciary Committee, which discussed it for two hours last week. The sponsor, Sen. Jerry Ortiz y Pino, D-Albuquerque, said after that hearing that he will craft a substitute bill to try to satisfy the criticisms of some committee members. Ortiz y Pino also has introduced a proposed constitutional amendment to allow voters to decide whether to legalize possession and personal use of marijuana. It’s first stop will be the Senate Rules Committee.

Solar Energy: HB 61 would reinstate the Solar Market Development Tax Credit, which expired at the end of last year. The measure has passed one House committee and is awaiting a hearing by the House Tax and Revenue Committee.

Two versions of another bill, named the “Consumer Protection for Distributed Generation Act,” are opposed by several environmental groups who say the legislation is part of national push by utility companies and oil-and-gas interests to stifle the growth of solar energy. Backers including Public Service Company of New Mexico say the legislation would protect consumers by requiring solar companies to abide by a heightened level of transparency. The Senate version, SB 210, cleared the Senate Judiciary Committee this week. The House version, HB 199, is in the House Judiciary Committee.

At least two ethics commission bills are pending before the Senate Rules Committee, while another, House Bill 10, has gone through one House committee and awaits hearing in the House Judiciary Committee.

Immigration: HB 116 would prevent state agencies from using government employees or resources to investigate people whose only violation of the law might be living in the United States without proof of immigration status. It passed one House committee and awaits action by the House Judiciary Committee.

Open primaries: Two bills would allow voters not registered as Democrats or Republicans to vote in primary elections. The House version, HB 206, passed one House committee this week and is headed to the House Judiciary Committee. The Senate version, SB 205, hit a snag in the Senate Rules Committee. The sponsor, Sen. John Sapien, D-Corrales, said he will submit a substitute bill that would allow the major political parties to decide whether they would permit independents to vote in their primaries.

Conversion Therapy: SB 121, which would prohibit the discredited practice of subjecting minors to therapy intended to change a person’s sexual orientation, is expected to be heard on the Senate floor on Thursday or Friday.