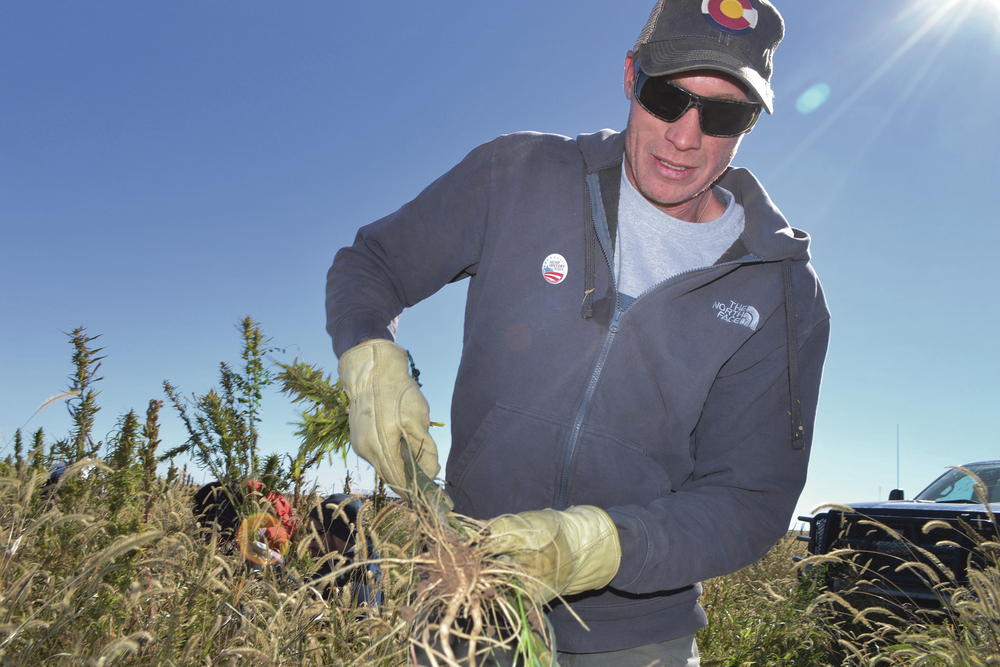 When Mikki Anaya worked as the executive director of the Santa Fe Farmers Market Institute, a nonprofit that advocates for farmers and ranchers, she became acutely aware of what she characterized as a troubling trend in New Mexico.

“A lot of families no longer farmed or ranched land that had been in our families for many generations,” Anaya said. “It deeply saddened me to see that transition happening.”

Anaya started to study the dynamics of the change and concluded that economics were a root factor.

“A lot of it is that people are just leaving our rural communities because there’s no economic opportunity there,” she said.

The solution, Anaya and others believe, may be found in hemp.

A cousin of the marijuana plant, hemp thrives in different climates, uses half as much water as wheat and a quarter less than alfalfa, and it can be used in a vast array of products, from clothes and cosmetics to food and fiberboard.

So if hemp is such a miracle crop, why isn’t it flourishing in agricultural communities across New Mexico?

The answer is simple yet complicated: Hemp is illegal.

Democratic state lawmakers and many Republicans, too, hope to change that during the current legislative session with a bill that would legalize the growing of hemp for research and development. According to the New Mexico Industrial Hemp Coalition, 32 states have removed barriers to the production of hemp under the industrial hemp research and pilot program provisions of the 2014 federal Farm Bill.

Efforts to legalize hemp production in New Mexico have failed in the past, first for lack of Republican support and most recently because Republican Gov. Susana Martinez vetoed a hemp bill in 2015.

But the outcome could be different this year. Some Republicans from farming areas are backing the most recent bill, seeing in it an economic opportunity for their districts.

“As I learned more about industrial hemp, it became apparent to me that it really could be a tremendous cash crop, so that could help save our agricultural communities,” she said.

Hemp is what took Ryan Loflin back to his family farm in southeastern Colorado.

“I grew up on a farm. My dad grew up on the same farm,” said Loflin, who decided to get out of the family business at age 18 and go into construction because “the future of farming was looking pretty bleak.”

After moving away for a few years, Loflin started to learn about industrial hemp, which not only allowed him to go back home but to buy the family farm from his father.

“It’s given my father an opportunity to retire without selling out to a stranger or something like that,” he said.

Loflin, now 44, is now known as the first U.S. farmer to successfully plant and harvest industrial hemp in decades.

“We’re going to keep expanding, try to buy more acreage and expand our operations in the future here,” he said by phone from his home in Springfield, Colo.

Hemp, which once flourished in the United States, started to wane after Congress approved the “Marihuana Tax Act” in 1937 “with massive propaganda in a national campaign, funded largely by drug and paper companies,” according to a 2012 report by an Industrial Hemp Task Force commissioned by the New Mexico Department of Agriculture.

“Industrial hemp growers were promised that the Act did not apply to them, but after passage, it was revealed that industrial hemp was included and over the years it became harder and harder to get a license to grow industrial hemp,” the report states.

In 2015, New Mexico legislators approved an industrial hemp bill, but Martinez vetoed it. A former prosecutor, she said the bill posed a number of problems because of contradictions it would create between state and federal law.

Industrial hemp proponents contend the plant has been unfairly demonized.

“There’s fear on the fourth floor [of the state Capitol] that it can be mistaken for marijuana,” said Jerry Fuentes, a farmer from Truchas and hemp activist who has been lobbying for industrial hemp production in New Mexico for years.

“The leading Republican in the U.S. Senate is the leading proponent of industrial hemp on the federal level,” Fuentes added, referring to Senate Majority Leader Mitch McConnell of Kentucky, a state that allows production of hemp for agricultural research purposes. “That’s why we can’t understand why the governor has such reservations.”

The Senate approved Senate Bill 6, sponsored by Sen. Cisco McSorley, D-Albuquerque, on a 37-2 vote. If the bill becomes law, it would authorize the state Department of Agriculture to issue licenses to grow the plant for research and development. The proposal would require New Mexico State University to establish a fund using fees collected by the department. The money would not revert to any other fund at the end of a fiscal year.

McSorley told the Senate that the Department of Agriculture and the university would be responsible for setting up regulations governing production of hemp by farmers. He’s said he wants to make sure that New Mexico farmers are positioned to take advantage of a hemp industry once Congress decides to remove current restrictions.

SB 6 is similar to the bill, also sponsored by McSorley, that the governor vetoed in 2015.

McSorley said the only difference between his latest bill and the 2015 bill is that the new bill does not contain the word “commercial.” Allowing commercial production of hemp was one of the governor’s concerns about the earlier legislation.

“Any permission to cultivate hemp for commercial purposes under this legislation would, of course, also be contrary to federal law,” Martinez wrote in her veto message two years ago.

A spokesman for Martinez did not respond to a request for comment late last week on whether she supports the Senate bill or a more sweeping measure that cleared the House of Representatives last week.

The House bill passed by a comfortable margin, 42-26. Still, only six Republicans voted for the bill, at least partially because the House version would exempt cultivation of industrial hemp from the Controlled Substances Act.

Republican House members still could get behind McSorley’s bill, which tightly focuses on research about what could be an important crop for New Mexico farmers.

After being forbidden for decades, American farmers in many states began growing hemp after Congress in early 2014 passed a farm bill that removed industrial hemp grown for research purposes from the Controlled Substances Act. Since then, 32 states have approved legislation similar to McSorley’s bill allowing hemp research. Other state legislatures, including Arizona and Alaska, are considering establishing hemp programs.

Some states have gone further. According to an August 2016 article on the National Council of State Legislators’ website, at least 16 states have legalized industrial hemp production for commercial purposes. Kentucky already has a robust hemp industry, McSorley told fellow senators. Two of the biggest supporters of industrial hemp on the national level are that state’s two Republican U.S. senators, McConnell and Rand Paul. And just north of New Mexico, Colorado produces more than half of the industrial hemp grown in the United States.

But the commercial aspect of the 2015 bill wasn’t the only objection New Mexico’s governor had. She also said the proposal could complicate law enforcement because the fibrous plant is basically the same plant as marijuana but with a much lower level of the intoxicant THC.

Given “the similarities between growing hemp and marijuana, this legislation could also create serious challenges for law enforcement in investigating drug crimes,” Martinez wrote.

There might have been some political factors at play, as well. There is no love lost between McSorley, an outspoken liberal, and the Republican governor. The veto came only days after McSorley had filibustered in the last 10 minutes of the 2015 session, ensuring that a capital construction projects bill pushed by Martinez would die without a vote in the Senate.

Mike Sullivan, a hemp farmer who owns an 80-acre operation in Brighton, Colo., and manages an additional 320 acres, predicts New Mexico will get into the industry once the state realizes hemp is an “agricultural commodity just like anything else.”

“There’s literally thousands of different things that can be made out of hemp, and the industry is pretty much brand new,” he said. “It’s an entrepreneur’s dream. You can find a niche just about anywhere.”

Sullivan said New Mexico is losing out by failing to allow the production of industrial hemp.

“I would get on the bandwagon sooner rather than later,” he said. “There’s already a lot of states that have legalized it. Not all of them have allowed people to grow it in their state yet, but that’s coming soon, I’m sure, so you definitely don’t want to be last on the train.”

While hemp and marijuana look and smell alike, Sullivan said concerns about confusing the two plants are unfounded.

“I tell people, ‘Put up signs that say it’s a registered hemp field, contains no THC and then don’t worry about it,’ ” he said.

But until hemp is legalized at the federal level, even farmers are worried about getting into the business, Loflin said.

“It just makes farmers leery that it’s still federally illegal,” he said. “There’s no doubt about that. The feds could still decide all these cannabis laws are out the window. If they wanted to, they could easily do that. Hemp is still considered a Schedule 1 drug, so it’s just like heroin.”