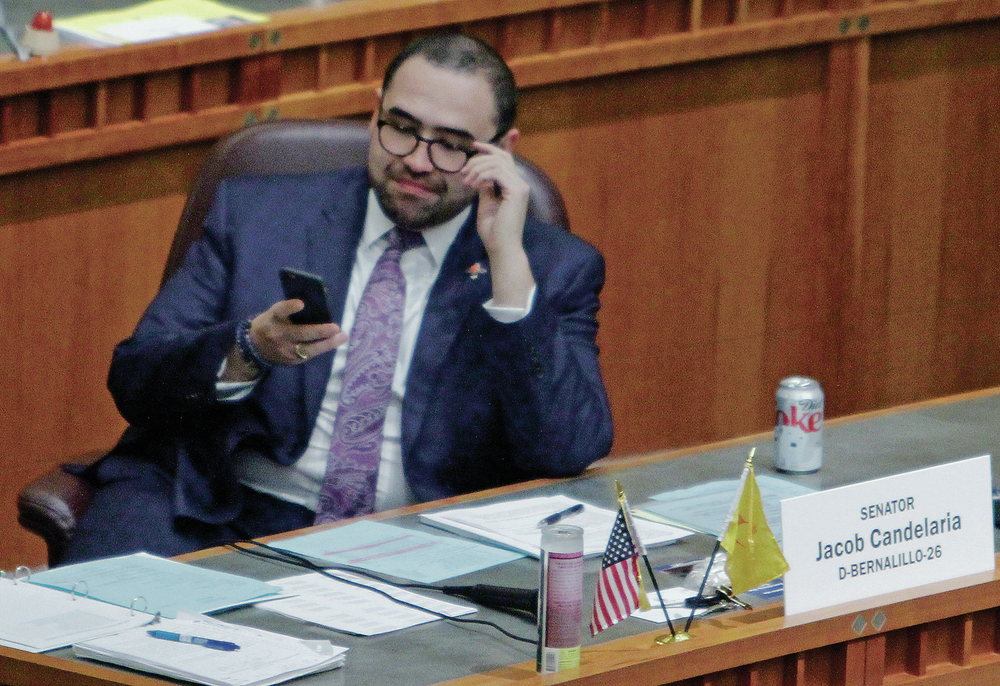 Sen. Jacob Candelaria, D-Albuquerque, sits at his desk after passage of his legislation to make it easier for gender changes on birth certificates.

With little debate Tuesday, the Senate approved a bill that would make it easier for transgender people to change the gender listed on on their birth certificate.

Under Senate Bill 120, transgender people wishing to change their birth certificate no longer have to submit a physician-signed statement that they have undergone a sex-change operation.

Instead, the only required document would be a form signed signed under penalty of perjury by a licensed medical or mental health-care provider saying that, based on the provider’s opinion and in accordance with contemporary professional standards, the individual’s sex designation should be changed.

The bill sponsor, Sen. Jacob Candelaria, D-Albuquerque, told the Senate that the provider’s statement would have to confirm that the applicant had undergone appropriate clinical treatment for gender transition. Then, he said, a court would decide whether the birth certificate’s marker should be changed.

Several transgender residents testified for the bill when it was heard in Senate committees. They said it would make them less susceptible to discrimination when applying for jobs or admission to schools. One transgender woman testified she’s scared that if she’s hospitalized or admitted to a nursing home she could end up with a male roommate. Some said insurance companies won’t cover mammograms for transgender women even when their doctors say it’s necessary.

Senators approved the bill 28-10. Five Republicans joined 23 Democrats in voting for it. All the dissenting votes came from Republicans.

One of the opponents, Sen. Pat Woods, R-Broadview, asked how the bill would affect new state driver’s licenses that comply with the federal Real ID law. “It seems that male or female is marked on it and if you changed that, wouldn’t that be a problem?”

Candelaria replied: “This would not have a direct impact that we can identify…. Actually this could streamline the process because it brings it in line with federal approach.”

Candelaria said transgender people can get passports with their current gender, meaning they can obtain a state driver’s license using their passport that complies with the Real ID law.

According to the National Center for Transgender Equality’s website, “Under the current policy, you can obtain a full 10-year passport with an updated gender marker if you have had clinical treatment determined by your doctor to be appropriate in your case to facilitate gender transition. No specific details are required about what type of treatment is appropriate for you.”

According to the National Center for Transgender Equality, 14 states allow transgender people to change the sex on their birth certificate without a court order or proof of surgery. Earlier this month, Delaware became the latest state to adopt a law similar to Candelaria’s bill.