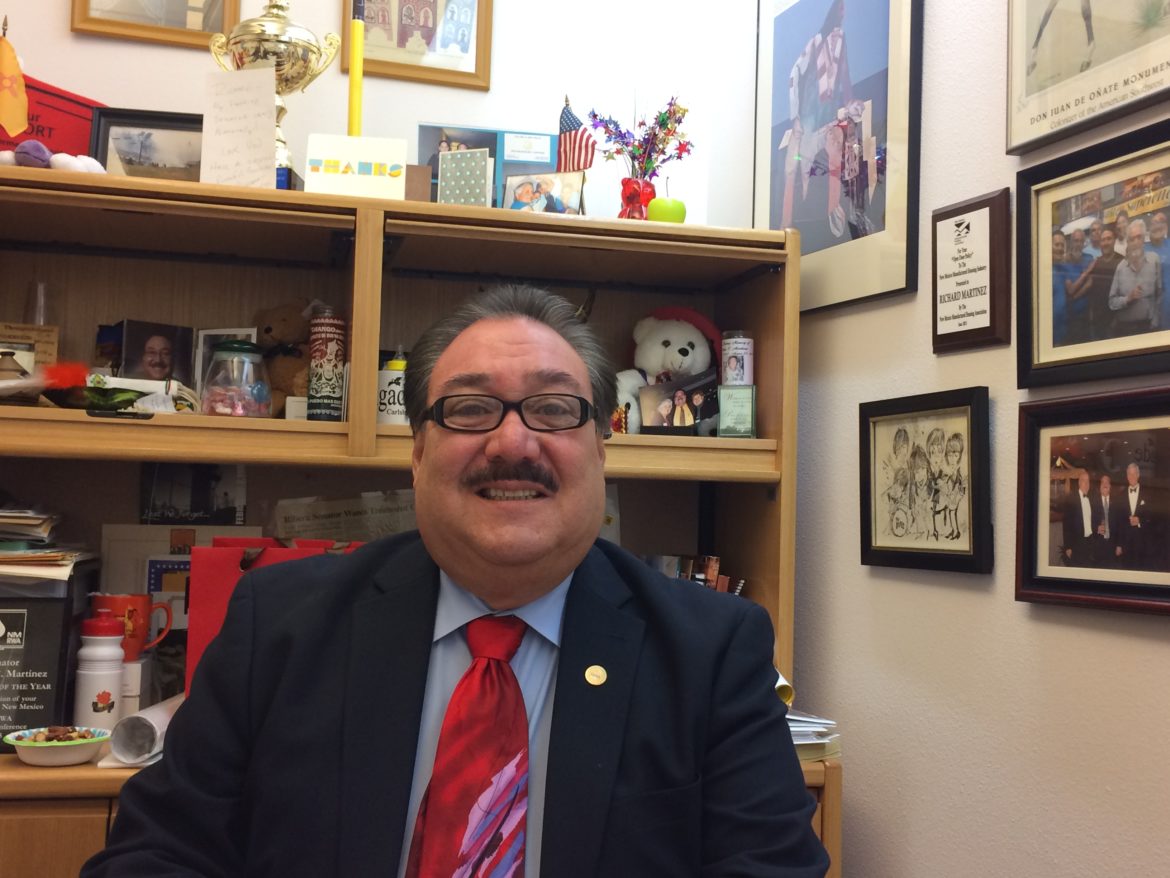 Sen. Richard Martinez, D-Española, presented a bill to the Senate Conservation Committee Thursday that would restore a state agency’s ability to penalize oil and gas companies that pollute water. Senate Bill 307 would also increase those penalties, which haven’t been updated since the Legislature passed the Oil and Gas Act of 1935.

During his presentation to the committee, Martinez pointed out the timeliness of the bill as the Trump administration has emphasized, he said, the “need to shift power to states.” If passed and signed into law, SB 307 would “ensure we meet the federal government’s standards for New Mexico to be in charge of its oil and gas programs,” he said.

Under the Safe Drinking Water Act, the U.S. Environmental Protection Agency can authorize states to take over certain regulatory duties. Under that program, states must be able to assess penalties against companies that pollute water.

But in New Mexico, the state’s Oil Conservation Division (OCD) hasn’t been able to do that for years.

In 2009, Marbob Energy Corporation, now owned by Concho Resources, sued OCD. The company argued that the division lacked the authority to assess civil penalties and sanctions against companies that polluted water resources.

Related: Bill would allow regulators to fine oil and gas companies for spills

The New Mexico Supreme Court sided with Marbob, ruling that OCD should instead report violations to the New Mexico Office of the Attorney General, which could in turn sue to collect penalties. Because the AG must prove that the pollution violation was committed “knowingly and willfully,” to enforce civil penalties on oil and gas companies, it must prove the violation to a criminal standard.

Since 2009, OCD has not referred any violations to the AG.

During the committee meeting, more than a dozen citizens and representatives of environmental groups spoke in support of the bill.

Mary Feldblum, representing the Oil and Gas Accountability Project, pointed out that New Mexico’s current penalties are far lower than those in other states. “This would impose penalties on bad actors,” she told the committee members, “it has nothing to do with the good actors.”

“With all due respect to the sponsor, who has been very good to business, there are misperceptions about the penalties,” said Mike D’Antonio, lobbyist for the New Mexico Oil and Gas Association. D’Antonio pointed out that OCD has many different enforcement actions at its disposal. The division can shut-in wells, for example, or ban operators from receiving new permits. Those and other actions are as or more effective than penalties, D’Antonio argued.

Industry also opposed language in the bill that would eliminate the requirement that a person acted “knowingly and willfully” in their violation of the Oil and Gas Act.

“I believe there are a lot of problems with the bill,” said Karin Foster, executive director of the New Mexico Independent Petroleum Association. Those include eliminating the knowing and willful standard and also the bill’s language concerning violations that “threaten to pollute groundwater.”

Foster added that industry would like to work with advocates to make the bill better.

Map of the Permian Basin

“This sort of bill has a real impact on us, small operators like us,” said Claire Chase with Mack Energy, which she said employs about 1,000 people.

“With oil coming back, the Permian Basin is the next big play,” Chase said. “Companies look at New Mexico and if it’s unfriendly, they’re going to go drill in Texas.”

The Permian Basin, with its vast oil deposits, encompasses part of west Texas and southeastern New Mexico. Most of the basin falls within Texas.

Gabrielle Gerholt with Concho Resources also spoke against the bill. A former general counsel with OCD, Gerholt said Martinez was misinformed about the agency. The Marbob case, she said, ensured that the cases of companies accused of violating the law would be heard by a neutral body—a court—rather than by OCD.

She also invited people to look on the OCD website, where penalties are listed.

According to the division’s website, in 2016 it assessed $20,000 in penalties against a total of five companies for six incidents.

He also asked about fines in other states and wondered how today’s penalties stack up against the 1935-implemented penalty of $1,000 per day.

Martinez’ expert witness, attorney Michelle Miano, said that penalties in Texas are $10,000 per day. And committee members and staffers calculated that in today’s dollars, the 1935 penalty of $1,000 per day is equivalent to about $17,000 today when adjusting for inflation.

The bill’s proposed $10,000 per day maximum penalty isn’t close to that, Wirth noted. “Before arguing that the sky is falling, let’s put this into perspective,” said Wirth, who added, “People can message this how they want, but [the bill] is trying to bring it up to date.”

Sen. William Payne, R-Albuquerque, raised a hypothetical scenario, envisioning “some poor guy” putting the wrong date on a permit application and then facing a third-degree felony.

The bill would make it a third-degree felony if a person knowingly violates the Oil and Gas Act or falsifies, omits or destroys required records.

Sen. Ron Griggs, R-Alamogordo, also spoke against the bill, which he said appeared to have been worked on “without talking to the people involved.”

During a discussion about penalties and spills, Sen. Bill Soules, D-Las Cruces, asked if anyone from OCD, a division of the New Mexico Energy, Minerals and Natural Resources Department, was in the room.

No employees of the division nor the agency were present.

The committee passed the bill along party lines. SB 307 heads next to the Senate Judiciary Committee.

Martinez, who chairs that committee, spoke with NM Political Report Thursday after the hearing.

“It’s really a simple bill. If you look at the violations and penalties in our surrounding states, New Mexico is the lowest,” he said. “All we’re trying to do is bring the civil penalties up to standard and give the OCD the authority to impose those rather than having to go to the Attorney General’s Office.”

Martinez said he was disappointed no one from OCD or EMNRD attended the meeting. “They haven’t communicated with me at all,” he said, “though I think the bill helps them in many ways.”

As the bill moves forward, Martinez said he hopes to work on some of the issues brought up at the meeting to build a consensus. But, he said, “I’m not sure we’re going to convince the industry that it’s not a bad bill.”