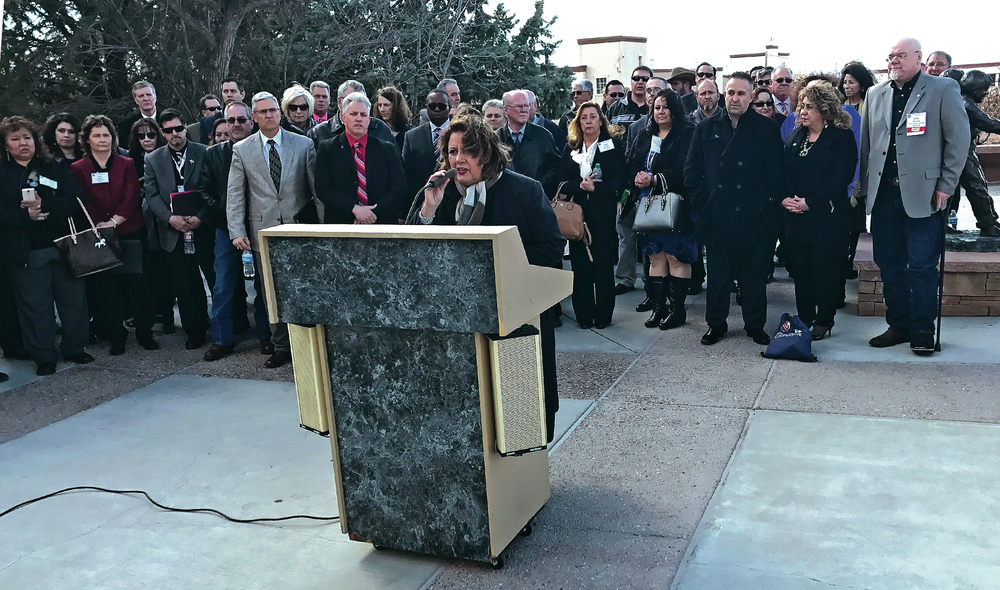 Veronica García, superintendent of the Santa Fe Public Schools, speaks during a news conference Friday at the Capitol, saying lawmakers and Gov. Susana Martinez must put aside party differences and agree on a reasoned budget that won't slash more funding for schools. At least 41 superintendents from across New Mexico attended the event.

At least 41 of New Mexico’s 89 school superintendents stood outside the state Capitol on a windy, bone-chilling Friday afternoon to deliver a message of desperation.

The weather was rotten and they said their budgets are in the same condition. Six of the superintendents spoke publicly, and all of them said their districts have cut so much so fast to help resolve the state’s budget crisis that they are reeling. That puts at risk the goal of every kid getting a good education, they said.

Veronica García, superintendent of the Santa Fe Public Schools, said Democrats who control both houses of the state Legislature and Republican Gov. Susana Martinez must come together in the spirit of compromise to save the schools and the children they serve.

“If they truly want to serve the state, they will do it,” García said. “People have to come above party.”

Democrats in the Legislature say certain tax and fee increases are necessary, such as on internet sales and heavy trucks that pound state highways. Martinez has said she won’t accept tax increases. If a stalemate persists, more cuts to public schools are a certainty, Senate Finance Committee Chairman John Arthur Smith, D-Deming, said earlier this week.

García said her district already has carved about $5.5 million from a $102 million budget since the Legislature had a special session last October. About half the cuts occurred then and the rest since lawmakers went into a regular 60-day session in January.

School kids don’t belong to political parties, and school districts aren’t built on party lines, García said. They need lawmakers and Martinez to put aside party differences and agree on a reasoned budget that will allow schools to do their work, García said.

She thanked the House of Representatives for softening a round of the latest cutbacks, saying the approach it took helped Santa Fe’s schools.

Tom Sullivan, superintendent of the Moriarty-Edgewood School District, had a more downbeat assessment when he followed García to the lectern.

“Our story is even more bleak,” Sullivan said. “… All the numbers are red, and we can’t fall back on cash balances. Our cash balances have been wiped out.”

It’s so dire that the Moriarty-Edgewood district won’t be able to open July 1, the start of the next state fiscal year, Sullivan said.

Crit Caton is superintendent of the Artesia Public Schools in oil country, the Permian Basin of southeastern New Mexico.

Yet, he added, some people continue to say that the state’s financial problems haven’t hurt classrooms.

“I’m not going to stand here and call him a baldfaced liar,” Caton said. “I’ll say they don’t know what they’re talking about.”

New Mexico faced a similar budget crisis from 2008 through 2010, when the nation’s economy tanked amid the turmoil of banks coming close to collapse.

Sen. Howie Morales, D-Silver City, said these times are worse. New Mexico’s economy is as weak as it was during that recession. “And this time there’s not a billion dollars in federal stimulus money to bail us out,” he said.