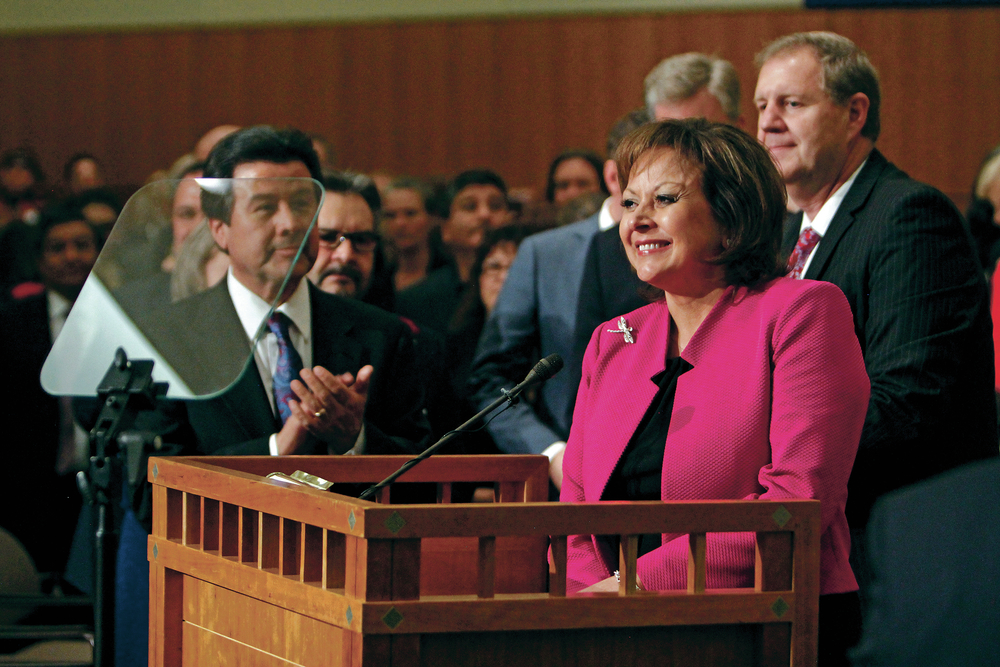 Gov. Susana Martinez takes the podium Tuesday to deliver her State of the State address during the first day of the state Legislative session at the Roundhouse.

In a shake-up of state government, Gov. Susana Martinez has ordered agencies throughout New Mexico’s bureaucracy to eliminate human resources divisions and shift responsibility for personnel matters to a single office.

Martinez had telegraphed the move for months because of a budget crisis that has prompted cuts across New Mexico government. Her order follows through on a recommendation floated many times during the last several decades as a means of streamlining state bureaucracy and cutting costs.

But Martinez’s executive decision also puts the jobs of hundreds of government employees in peril at a time when New Mexico’s unemployment rate is among the nation’s highest.

A spokesman for the State Personnel Office said it is still assessing how many employees will be affected but added that the move is expected to save millions of dollars each year. The governor’s order is for the personnel office to take on human resources services for agencies throughout the executive branch of government.

And in a statement Friday, Martinez touted the move as cutting spending and helping balance New Mexico’s budget as Democratic legislators push her to raise taxes rather than slice further into government services to resolve a long-running financial crisis.

“Actions like this show that we take our budget challenges seriously, and we’re not going to ask our families to carry the burden,” the governor said.

The State Personnel Office already manages human resources for smaller state agencies. But many departments have their own personnel bureaus. The Department of Transportation, for example, has a human resources staff of about 50 people around New Mexico.

This system is fragmented and inefficient, the governor wrote in an executive order she signed Wednesday, two days before her office released it.

Her order does not specify a time line for consolidating human resources services, only calling on agencies to act “as soon as practicable.”

A spokesman for the State Personnel Office said it has already been studying models in other states.

Martinez’s order applies to agencies, boards and commissions in the executive branch, but not other branches of state government or local governments.

Martinez campaigned seven years ago on cutting the state bureaucracy. She took office in 2011 with several recommendations from task forces for consolidating entire departments. Those proposals failed in the Legislature, and the governor did not press for major reorganizations of state government as revenue improved after the recession.

But now, as state revenues continue to fall and reserves are nearly empty, eliminating human resources divisions could be one of the more palatable options for cutting costs.

Martinez does not need the Legislature’s approval for the move, but lawmakers have been open to the idea, suggesting that streamlining the hiring process could reduce the time it takes the state to fill jobs, particularly in departments such as Corrections and Children, Youth and Families, where turnover is high.

Carter Bundy of the American Federation of State, County and Municipal Employees said Friday he hopes the change will improve personnel services.

But Bundy also raised concerns that eliminating human resources staff in particular departments could end the rapport between some government officials, union representatives and workers.

“You want people to be able to work things out at the lowest level possible,” he said, adding that resolving issues within departments can save the state money.

Personnel offices in each of the biggest departments are better equipped than a centralized bureau serving all of state government to address the particular needs of employees and departments, he said.

Varela said the change Martinez has ordered “would be a disservice to those employees and ultimately for the taxpayers.”

“You need human resources staff at those agencies,” he said.

View all Department of Transportation articles →