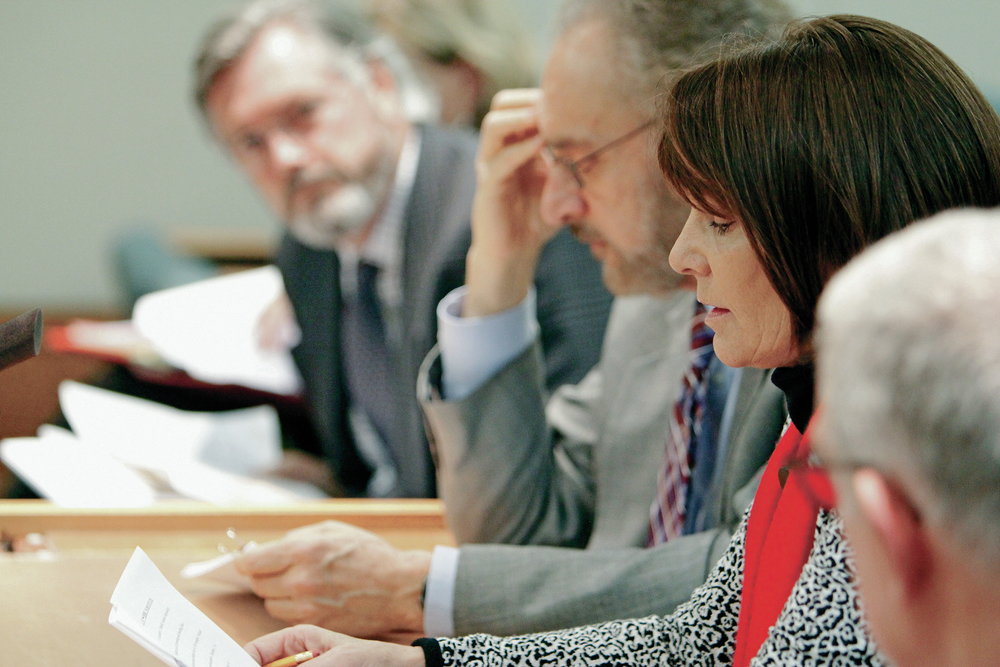 Rep. Yvette Harrell, R-Alamogordo, one of the co-sponsors of House Bill 347, presents the measure to the House Business and Industry Committee on Friday.

luInterest rates for many small storefront loans in New Mexico would be capped at 175 percent and required to have a term of at least four months under a bill that got a unanimous recommendation from a House committee Friday.

The House Business and Industry Committee gave a positive recommendation to House Bill 347, sponsored by state Rep. Patty Lundstrom, D-Gallup. Earlier this week the committee delayed action on the bill to allow members of the small-loan industry to negotiate a compromise with backers of a bill calling for capping interest rates at 36 percent.

However, Dan Najjar, a lobbyist for Axcess Financial, a company specializing in small installment loans, said that while some changes were made to the original version of the bill, the two sides failed to reach a consensus.

The committee action represents the latest round in a long-running legislative battle over an industry which is attacked for charging exorbitant interest rates on short-term loans that the lenders say many New Mexicans depend on. The state currently does not impose a cap on interest rates.

Committee Chairwoman Debbie Rodella, D-Española, a co-sponsor of the bill, said the legislation represented several years of work. “Not everyone is on board,” she said, “but this is a big start.”

Another co-sponsor, Rep. Yvette Herrell, R-Alamogordo, said, “the one common ground we all understand is that we do want to do something in terms of consumer protections but also be pro-business.”

Immediately before hearing HB 347, the committee, with virtually no discussion, voted unanimously to table — effectively killing — HB 26, which would have imposed the 36-percent cap.

That bill’s sponsor, Rep. Patricia Roybal Caballero, D-Albuquerque, wasn’t present for that vote because she was in another committee presenting an unrelated bill. After the meeting she told The New Mexican she knew there were not enough votes to get her bill through the Business and Industry Committee.

She said the committee “is continuing to support the voice of a particular sector, which is the business and industry sector, and not necessarily taking a strong enough position in support of controlling excessive abuse and exploitation of a larger population.”

For more than a dozen years, lawmakers repeatedly have considered but declined to approve legislation to cap interest rates on payday loans, title loans, tax refund anticipation loans and similar small loans. The industry has fought the legislation with top-shelf lobbyists and significant campaign contributions to lawmakers.

Opponents of high interest rates told the committee that they can’t support the bill because it allows triple-digit interest rates and because they believe the reporting requirements in the bill don’t go far enough.

Ona Porter, who is vice chairman of the New Mexico Fair Lending Coalition, objected to the fact that the bill only requires the state to report aggregate numbers on small loans and not list individual companies.

“With these aggregated numbers there’s no real ability to tell who the bad actors are,” she told The New Mexican. She said this will make enforcement of violations virtually impossible for the Attorney General’s Office.

Opponents also don’t like the fact that tax refund anticipation loans are exempted from HB 347.

Bill sponsor Lundstrom said after the hearing that she also objects to that part of her bill. “We couldn’t get those companies to come on board,” she said. “But there will be another bill coming up soon that takes care of that,” she said. HB 438, sponsored by Rep. Patricio Ruiloba, D-Albuquerque, would require lenders disclose fees and interest for tax refund anticipation loans.