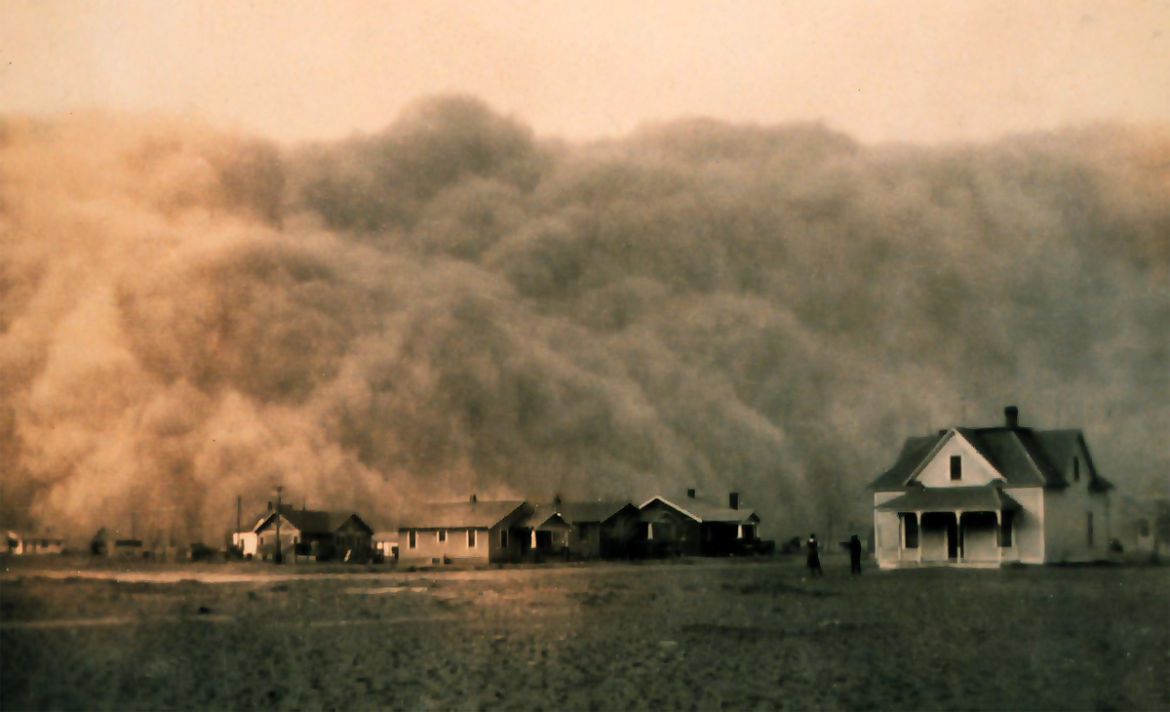 A dust storm closed parts of Interstate-10 near the border of New Mexico and Arizona Tuesday for the third day in a row.

By 11:00 a.m., weather forecasters reported gusts of 50 miles per hour and that a “wall of dust was approaching the Las Cruces area from the west.” At the same time, wind advisories for the lower and middle Rio Grande Valley and the Estancia Valley were upgraded to “High Wind Warning.” That means people should expect sustained winds of 40-50 mph and gusts of up to 60-70 mph.

High winds cause damage and raise the danger of wildfire. They also affect air quality, reduce visibility for drivers, aggravate allergies and in some parts of New Mexico, spread the spores that cause Valley Fever.

With its playas—dry lake beds—the area near Lordsburg is notorious for dust storms, said National Weather Service meteorologist Kerry Jones. Playas south of the border in Chihuahua also contribute to the area’s problems.

And so does drought. When there isn’t enough moisture to anchor down soils, high winds whip them up into dust storms.

“We do obviously get wind storms this time of year, but to have 60 to 70 mile per hour winds is pretty unusual for the late part of February,” he said.

Meanwhile, it’s good news that snow is falling in the northern part of the state.

“When you get [conditions] as warm and dry as last week, and add wind, those combinations eat snowpack. Literally,” Jones said.

Windy, warm spring conditions cause snowpack to skip the liquid stage and move from a solid to a gaseous state. This is known as sublimation, and reduces water that goes into streams and rivers.

What happens in March will be critical for snowpack and the state’s rivers later in the year. “Dry windy periods can really have a huge impact on the snowpack,” said Jones. “If we see it early in the season, like last week, we can make up some of it on the ground, like with this recent storm.”

New Mexico’s basins are in better shape than they were at this time last year, and the current storm will boost snowpack in northern New Mexico and southern Colorado.

Historically, March has been among the snowiest months for watersheds in northern New Mexico and southern Colorado. But for most of New Mexico, he said, “there was no meaningful precipitation in the month of March last year.”

And the forecast for the early part of the month doesn’t look great for this year.

“After this system goes by us now, we don’t see any precipitation in the forecast for those basins through the next seven to ten days of March,” Jones said. “That’s huge. You should be building snowpack through the month of March.”

Many of the southwest’s experts on dust storms are currently meeting in Arizona for the sixth annual Arizona Dust Storm Workshop. Discussions include how to mitigate blowing dust by working with landowners and focusing on land use practices and also how to better warn drivers of unsafe conditions.

Drivers should turn around or pull off the road as soon as they spot dust storms, before conditions make it difficult or impossible to drive. Experts also recommend turning off headlights and placing the car in park.

In 2014, seven people were killed when brown-out conditions on I-10 near Lordsburg caused an eight-vehicle crash.

On Sunday, poor visibility on I-10 caused three different crashes near San Simon.