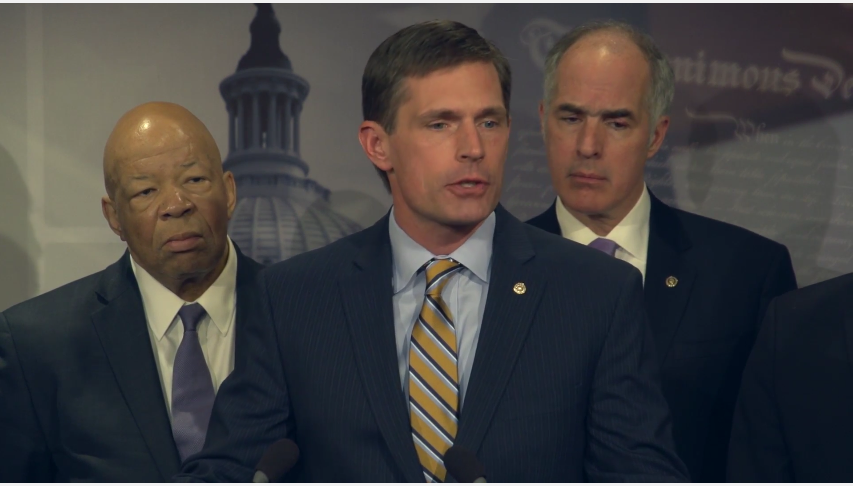 Sen. Martin Heinrich at announcement of bill to allow some pharmaceutical imports.

U.S. Sen. Martin Heinrich joined with other Senators, including Bernie Sanders, I-Vermont, to introduce legislation to allow the importation of some pharmaceuticals from other countries.

The senators announced the new legislation Tuesday, and Heinrich said the United States has the safest pharmaceutical system in the world, but also an expensive system.

“Details matter and I think this legislation gets the details right,” Heinrich said while announcing his support of the legislation. “I think it preserves the sort of system that has given us the safest pharmaceutical supply in the world while at the same time using a free market, market-based approach to driving down those costs.”

This came more than a month after Heinrich voted against a Sanders-sponsored amendment to a bill that sought to allow Americans to buy prescription drugs from other countries. The amendment, backed by many progressives, failed on a 52-48 vote.

In addition to Sanders and Heinrich, Sens. Cory Booker of New Jersey, Bob Casey of Pennsylvania and Angus King of Maine are cosponsors. King is an independent who caucuses with Democrats, while the others are Democrats.

Heinrich mentioned that he, Sanders and Booker talked about the bill for over a month. Booker, like Heinrich, voted against the January amendment. Both Heinrich and Booker came under fire from some progressives for their votes last month.

Democratic U.S. Reps. Elijah Cummings of Maryland and Lloyd Doggett of Texas sponsored a companion bill in the House.

Heinrich said he previously opposed the amendment over fears of the safety of the imported drugs.

The announcement of the new legislation highlighted some safeguards, noting FDA certification of foreign sellers and supply chain requirements.

“This is far overdue,” Heinrich said. “Our constituents are clamoring for change here and we need to deliver on this.”