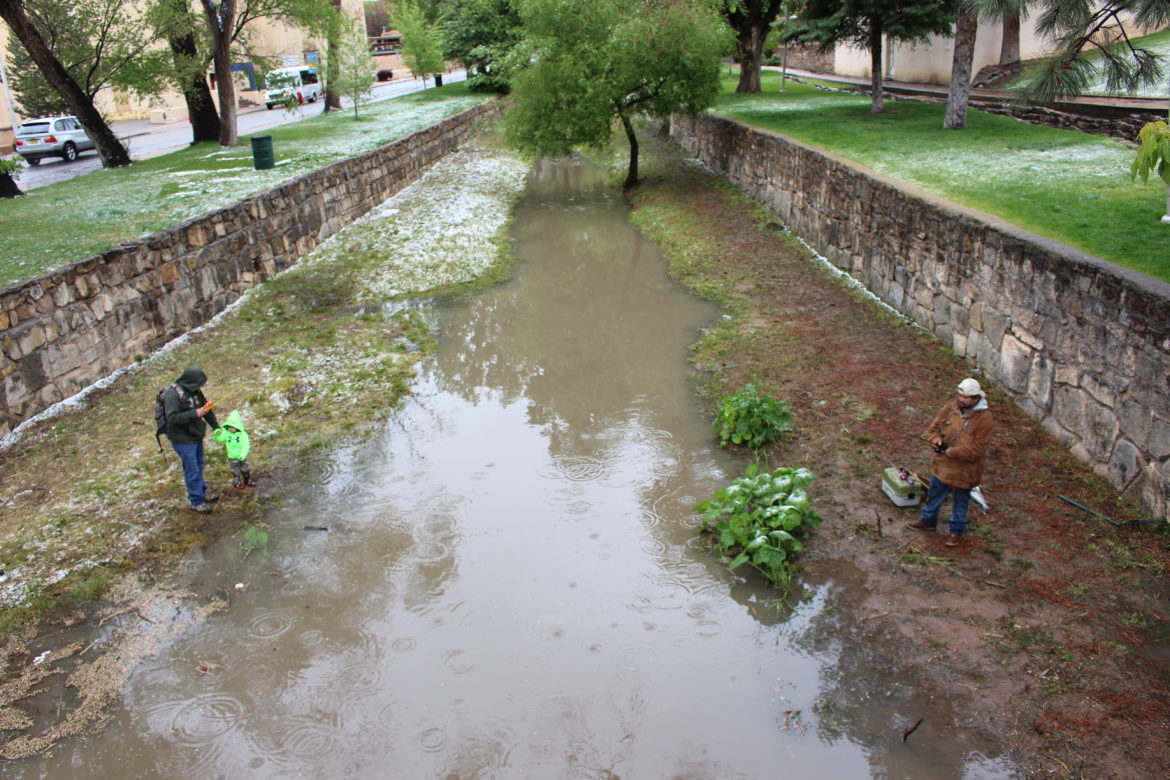 When the Santa Fe River flows in the springtime, the New Mexico Department of Game and Fish stocks trout for an annual fishing derby.

Trump’s order does not overturn the rule, which was already under a court injunction thanks to a lawsuit from 13 states, including New Mexico. Instead, it orders a final review of the rule, which will likely take years.

The Clean Water Rule was finalized in 2015 as a way to clarify confusion over parts of the Clean Water Act, which was signed into law by President Richard Nixon in 1972. The rule applies to navigable waterways and their tributaries.

Under the rule, a tributary doesn’t need to be a continuously flowing body of water. But it must have flowing water—marked by a bed, bank and high water mark—to warrant protection. The rule, for example, does not regulate ditches, puddles or farm ponds.

On the EPA’s website, the rule is described as protecting the nation’s “regional water treasures”:

Science shows that specific water features can function like a system and impact the health of downstream waters. The rule protects prairie potholes, Carolina and Delmarva bays, pocosins, western vernal pools in California, and Texas coastal prairie wetlands when they impact downstream waters.

Conn noted that 93.6 percent of New Mexico’s tributaries are ephemeral or intermittent, which means the rule would have restored Clean Water Act protections to many of those waters.

“Today’s Executive Order is a step in the right direction to reign in the EPA and cut the government red tape that is hurting landowners and job growth in New Mexico,” read the statement. “The WOTUS Rule allows Washington bureaucrats to regulate small streams and natural and manmade ditches across lands owned by farmers, ranchers, and small businesses.”

Pearce also claimed that if implemented, the rule will “drive up costs for New Mexico landowners and will cost thousands of jobs.”

Trump’s executive order is titled, “Restoring the Rule of Law, Federalism and Economic Growth by Reviewing the ‘Waters of the United States’ rule.”

As soon as the rule was finalized in 2015, a coalition of 13 states sued to stop its implementation. The Sixth Circuit Court of Appeals in Ohio delayed the rule from going into effect as the litigation proceeded.

The two agencies in New Mexico that joined the suit were the New Mexico Environment Department and the Office of the State Engineer.

At the time of the court’s injunction in October 2015, then-Secretary of the Environment Department, Ryan Flynn, praised the decision in a statement.

“Now, with a nationwide stay, all 50 states’ regulatory agencies will no longer face the cost and uncertainty created by preparing for implementation of a new rule that awaits judicial determination of its legality, and which may never come to pass,” Flynn said.