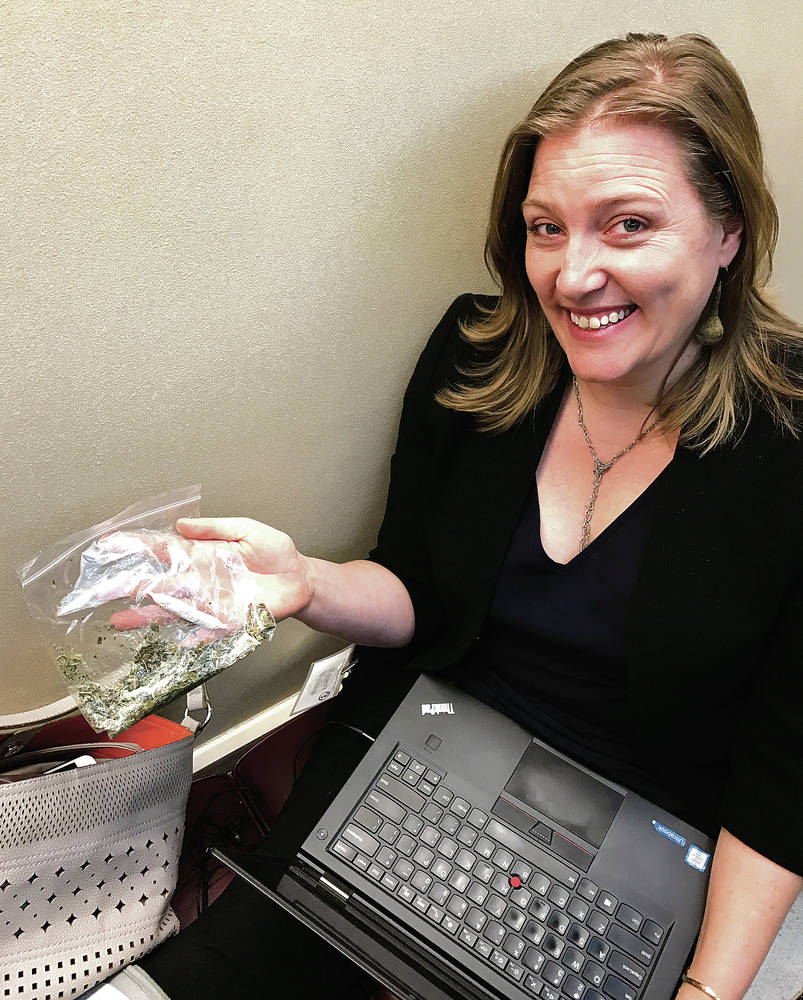 Emily Kaltenbach of the Drug Policy Alliance holds a baggie of tea leaves that she planned to use as a visual aid during a Senate debate Thursday on legislation to reduce marijuana possession penalties. The Senate approved the measure.

The state Senate on Thursday overwhelmingly approved legislation to decrease penalties for marijuana possession, with supporters saying the bill would reduce burdens on the criminal justice system.

Senate Bill 258 now moves to the House of Representatives. But even if it passes there, it’s almost certain to be vetoed by Gov. Susana Martinez.

“As a career prosecutor, Governor Martinez saw firsthand the damage drugs do to our families and communities,” Martinez spokesman Michael Lonergan said in an email. “She’s opposed to legalizing drugs — and that includes decriminalizing weed.”

Sen. Joseph Cervantes, D-Las Cruces, said he sponsored the bill after talking to judges and others in the judiciary about ways to reduce the load on courts and jails.

“We have a serious crime problem in our state, and our courts, judges and prosecutors are spending a great deal of time dealing with people charged with a nonviolent crime,” Cervantes said.

The measure would make possession of up to half an ounce of marijuana a violation similar to a speeding ticket. Those cited would have an option of paying a fine of $50 or challenging the citation in court.

Currently, in New Mexico, possession of up to 1 ounce of marijuana is a petty misdemeanor punishable by a fine and up to 15 days in jail, with second and subsequent offenses carrying a penalty of up to 364 days jail time. Possession of more than 1 ounce but less than 8 ounces is a full misdemeanor, with a potential jail term of a year. Possession of 8 ounces or more is a fourth-degree felony punishable by up to 18 months incarceration.

A staff report on the legislation’s fiscal impact said the effects of the bill were hard to quantify but “would have a positive fiscal impact on the courts because it would decrease court workloads.” Penalty assessments do not require court hearings unless the charges are contested. Marijuana possession charges currently carry criminal penalties that require court hearings.

“In 2016 there were 2,100 possession of marijuana 1 ounce or less cases filed in the magistrate and metropolitan courts, which were not related to any DWI, domestic violence, or felony charges,” according to the fiscal impact report. “There were 3,660 cases of use or possession of drug paraphernalia, which were not attached to DWI, domestic violence, or felony charges…. These numbers support a reasonable inference that even a moderate reduction in these types of criminal charges would have a significant impact on the courts’ workload.”

Senators approved the bill to lessen penalties for marijuana less than a week after a committee in the House of Representatives killed a bill to legalize recreational marijuana.

Debate of the bill on the Senate floor included a question about how many “doobies” are in an ounce and how law enforcement would charge people found in possession of edible marijuana products.

Cervantes noted that the bill does not address those issues because, like most drug penalties in the state, it is based on the weight of the substance, not its strength or form.

There was also much laughter and joking about who was an expert in marijuana and how much of a bag of potato chips one might eat after smoking marijuana.

Sen. Craig Brandt of Rio Rancho was one of eight Republicans who voted for the bill. “I don’t think we need to be putting people in prison for having a small amount of marijuana,” he said.

The city of Santa Fe has made possession of 1 ounce or less of marijuana a civil infraction punishable by a $25 fine. But city police still have the option of charging people with small amounts of marijuana in state court, where the stiffer penalties apply.