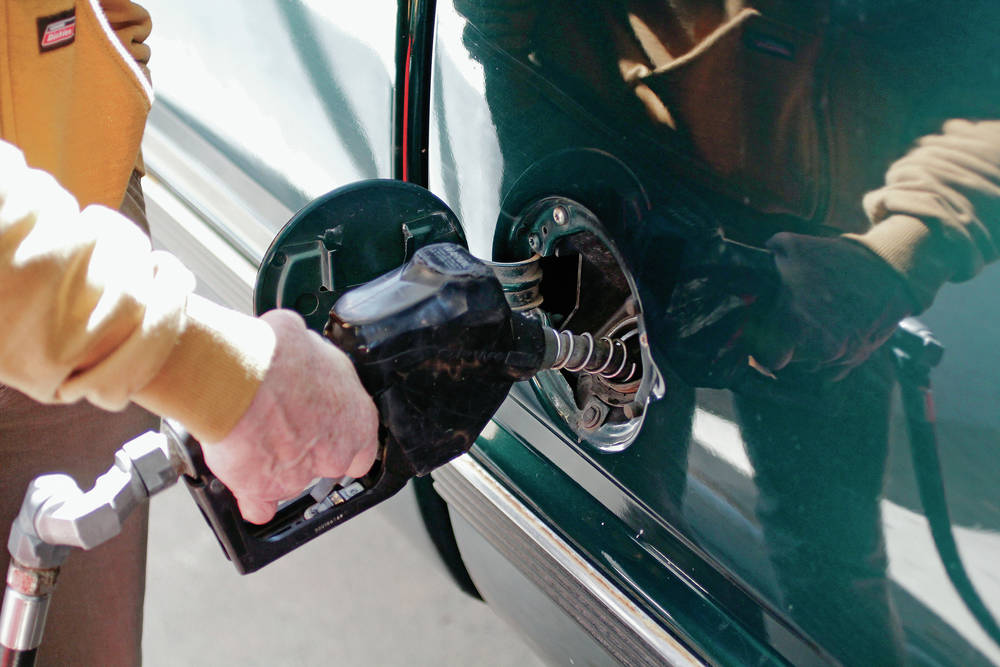 Charlie Drysdale of Santa Fe pumps gas Thursday at the Allsup's gas station on North Guadalupe Street. The Senate has passed a 10-cent increase in the gasoline tax that would go toward a new fund for road and bridge maintenance.

The New Mexico Senate, hoping to improve state roads and rebuild cash reserves, approved a bill Thursday that would increase the state gasoline tax for the first time in more than 20 years.

But the bill has little chance of becoming law.

“If it reaches the governor’s desk, she will veto it,” said Chris Sanchez, a spokesman for Republican Gov. Susana Martinez.

An override of Martinez’s veto is unlikely because the tax bill received support from only three of the Senate’s 16 Republicans.

The measure, Senate Bill 95, would raise about $180 million annually through a range of taxes and fees. One part would raise the state gasoline tax to 27 cents a gallon from 17 cents and the tax on diesel fuel to 26 cents from 21 cents. A companion measure would boost the fee charged on the purchase of a new or used cars and trucks to 4 percent from 3 percent.

Most of the new money would flow to the state general fund for about three years until cash reserves reach 5 percent, or about $300 million, of the $6.1 billion operating budget.

“If we don’t fix this problem, our cost to finance loans and bonds will be nothing compared to this tax increase. And that’s not fiscally responsible,” said Sen. George Muñoz, D-Gallup.

Senators approved the tax bill 29-13. Sen. Clemente Sanchez, D-Grants, sponsored the measure and all fellow Democrats voted for it. The three Republicans who voted for the tax increase are Aztec’s Steve Neville, Gay Kernan of Hobbs and Jim White of Albuquerque.

The tone of debate in a Senate that has come together on previous fiscal measures — including during a special session in October called to close a $700 million deficit — was perhaps a harbinger of the tough weeks ahead as lawmakers try to balance the budget for the fiscal year starting July 1.

The budget bill that passed the House of Representatives needs additional money to stave off more cuts to classrooms and other state agencies, said Sen. John Arthur Smith, D-Deming, the Finance Committee chairman. He said more cuts are coming unless lawmakers can deliver dependable revenue for the general fund.

That’s one reason the gas tax bill has support from teachers and public employees.

Martinez herself promised to replenish reserves, bringing cash up to the 5 percent level. She has so far failed to do that, and she has not released a plan on how to get there before the end of her term in December 2018.

Democrats who control both chambers of the Legislature have made their own pledge. They say they won’t approve another budget that cuts education and government services.

In its warning to Kansas, Moody’s said the state continues reliance on “stopgap measures that do not resolve or may even worsen” credit quality. Wirth said Moody’s is watching what happens in the New Mexico before deciding whether to further downgrade its credit rating.

“Stop gap measures that may intensify the problem — that’s what we’ve been doing for along time, ” said Sen. Bill Sharer, R-Farmington.

Though Sharer said he wants to restore fiscal solvency to the state, he and most of his Republican colleagues, including Minority Leader Stuart Ingle of Portales, voted against the tax increases. Ingle said the Senate needs to move a more comprehensive package on revenue and spending cuts instead of acting on a single bill.

The bill approved Thursday has unusual provisions on where the new money would be allocated so as not to increase state debt. A percentage would go to cities and counties for road repairs and maintenance, and another part would go to a new state road maintenance fund. That money, about $50 million a year for both pots, could not be used as a dedicated revenue stream for bonding, even though New Mexico has enormous unmet needs in road maintenance, legislators said.

“There is not a local road in our community that doesn’t need some work,” Smith said.

But the bulk of the money would be dedicated to rebuilding general fund reserves. Once reserves hit 5 percent, more of those dollars would flow into road projects, but not all of them. That bothered many Republicans.

“Now we raise taxes because we don’t have enough money for roads,” Brandt said. “That’s my concern with raising the gasoline tax and putting it into the reserve fund. We have no constitutional requirement that it be spent on roads.”

Motorists who were buying gasoline at a station not far from lawmakers on Thursday were not opposed to paying a bit more — as long as the tax went to fix roads.

Carmela Martinez. 56, who drives between Las Vegas, N.M., and Santa Fe, said the roads are so bad that she has to replace tires three times a year. She supports paying 10 cents more a gallon for gas because “our roads need to be fixed.”

Charlie Drysdale, who owns a plumbing company and said he drives all day, also supports the increase. “I’m for anything that’ll fix the roads,” he said as he pumped gas. “As long as it goes to where they say it’s going to go.”

At more than 50 cents a gallon, Pennsylvania has the highest gas tax in the United States. Alaska is the lowest at 12 cents, according to the Tax Foundation. New Mexico’s current 17 cents ranks in the bottom six nationally, with the average at 31 cents across the 50 states.