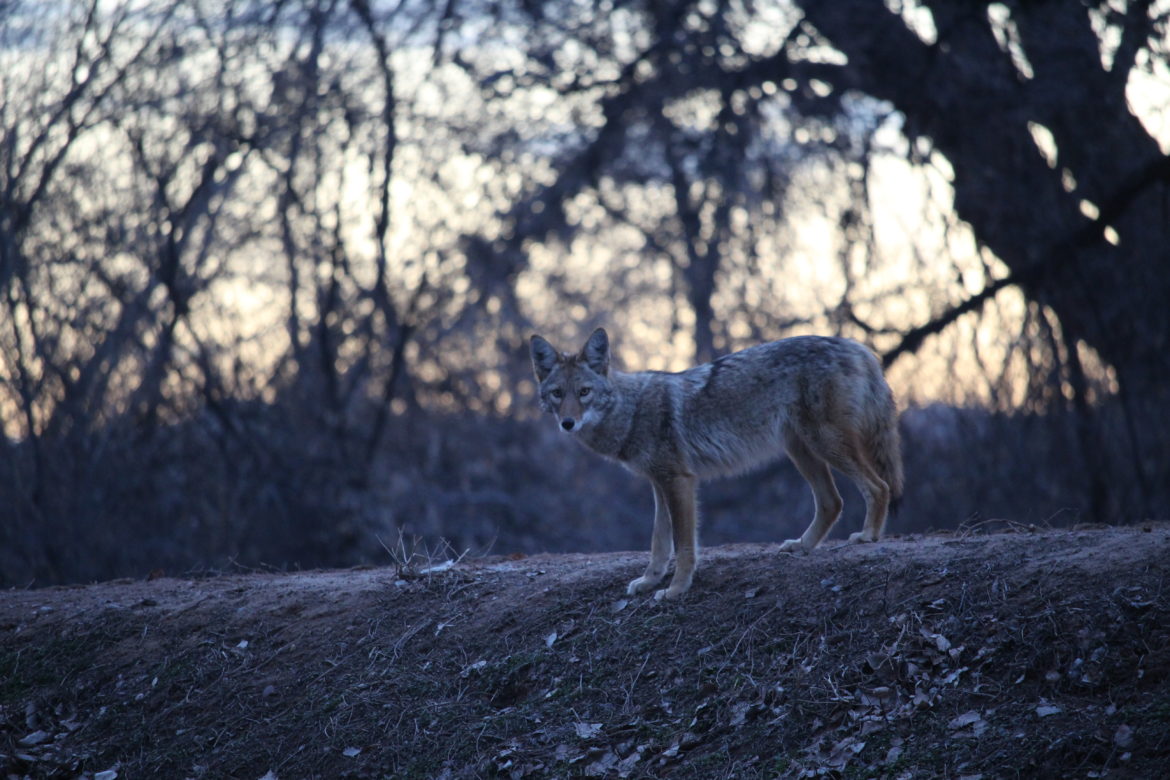 Because irrigation ditches are more than just coyote highways, right?

Irrigation season is kicking off on the Rio Grande. On March 1, the Middle Rio Grande Conservancy District started getting its laterals and canals ready. According to a story in the Valencia County News-Bulletin, the district is preparing for a normal season:

“So far, the snow pack and winter moisture has been very promising for this time of year and we hope this will continue well into late spring.

“There is above-average snow pack in the northern mountains, around 40,000 acre-feet of water in storage at El Vado Reservoir, and the district plans to store more during the spring runoff. It look like a good runoff is in the forecast where high river flows may persist through early June a condition we have not seen since 2005,” added [Water Operations Manager David] Gensler.

In southern New Mexico, meanwhile, KRWG reports the U.S. Bureau of Reclamation is releasing water from Elephant Butte Reservoir to Caballo, just downstream. Then the agency will start releasing water for farmers from Caballo Reservoir at the end of the month.

Irrigation season is the only time the lower Rio Grande regularly has water in it. For most of the year, when the channel isn’t used to move water downstream, the riverbed usually remains dry.

As New Mexicans are facing down another blustery day, let’s talk some more about dust storms.

Last week, I mentioned a workshop in Arizona related to dust storms and improving highway safety and warnings. Dusty and dangerous conditions had closed Interstate-10 in New Mexico near the Arizona border. It’s a problem Arizona has been dealing with a lot lately, not only because of the high-profile haboobs to hit Phoenix in recent years, but also as the state has battled with a farmer whose barren fields have caused accidents and highway closures.

[Ken] Waters said the change wasn’t the result of new or improved technology, but rather the simple fact the agency didn’t apply the polygon warnings already in place for tornadoes, thunderstorms and other serious weather phenomena to dust events. But soon the warnings will reflect the fact that Arizona dust storms are in a league of their own.

Since I’m already talking about Arizona, I might as well mention that federal officials just announced that in November, a trail camera grabbed a shot of a jaguar in the Dos Cabezas Mountains about 60 miles north of the U.S.-Mexico border.

In an Arizona Daily Star story, Tony Davis wrote that’s the seventh jaguar documented in the southwestern U.S. since 1996.

In a follow-up story, Davis also wrote about how the jaguar discovery adds to the border wall debate. The felines move back and forth between the U.S. and Mexico. That movement could be stopped by a continuous border wall. According to the story:

Today, Arizona has about 123 miles of pedestrian border fencing, out of 372 total border miles, that are high enough to potentially block large animals. Another 189 miles have vehicle barriers low enough for jaguars to cross. The rest are unfenced.

A warning from oil companies

Last week, the Associated Press reported an oil and gas lobbyist warned that as opposition to hydraulic fracturing threatens the “political viability of the oil industry in New Mexico,” oil companies are going to start fighting back.

“We are under constant attack on TV and in print and from the Legislature, and also especially in social media,” Chase said. “And sadly, the target on us is not getting smaller, it’s getting bigger. And because of these factors, the industry and the communities that we serve have to start fighting back.”

On the national stage, the U.S. Environmental Protection Agency’s new administrator, Scott Pruitt, withdrew the agency’s earlier request for information on methane leaks. Gathering that information was part of the Obama-era agency’s initiative to understand how much methane was emitted into the atmosphere from existing oil and gas well equipment.

According to a story in the Washington Post, Pruitt’s move came partly in response to a letter from attorneys general and governors in nine states. Those officials complained the information “furthers the previous administration’s climate agenda and supports…the imposition of burdensome climate rules on existing sites, the cost and expense of which will be enormous.”

But the EPA announcement could result in the United States emitting more greenhouse gases to the atmosphere in coming years. At the very least, it means that the United States will not be tracking those emissions as closely.

Carbon dioxide, methane and nitrous oxide are three greenhouse gases that have increased dramatically since the start of the Industrial Revolution and even in recent years

Methane is even more potent than carbon dioxide as a greenhouse gas in its effects on the climate. For years, some scientists have noted that if humans cut emissions of methane, which is a short-lived greenhouse gas, it might be possible to gain enough time to address the longer-term consequences of carbon dioxide emissions before the planet has warmed to levels considered dangerous and irreversible.

Can’t we all just get along?

Maybe, according to a guest post on Scientific American by University of California, Berkeley’s Daniel Kamman.

The energy expert pointed out that plans from both sides of the aisle have merits and would move the nation “significantly toward a sustainable future.”

Specifically, he’s talking about the Obama-era Clean Power Plan and the Carbon Dividend Plan proposed by the Climate Leadership Council, which is headed by prominent Republicans, such as former Secretaries of State James Baker and George Schultz.

Together the CPP and the CDP build a vibrant, intensely job-creating energy sector that would be far larger than either plan accomplishes alone. The CPP does not pit one state against each other, but pushes each state to develop its own carbon reduction plan. Both red and blue states are finding this easier and more profitable than previously imagined. The power sector reduced its carbon emissions 21 percent between 2005-2015, primarily by switching from coal to gas. It is well on the way to complying with the Clean Power Plan.

And in other energy news, the U.S. Energy Information Administration announced that in 2016 wind energy surpassed conventional hydroelectric generation. A total of 8,727 megawatts of new wind capacity came online in 2016. But, noted the agency, given a number of factors—including above-normal precipitation on the West Coast this year—hydropower is expected to beat out wind generation this year.

Don’t forget to drop me a note at laura@nmpoliticalreport.com with environment news from your neck of the woods. Or, if you’re a researcher or scientists and your work pertains to New Mexico’s rivers, forests, skies or wildlife, let me know. You can also share news via Twitter. Just CC me, @LauraPaskus.