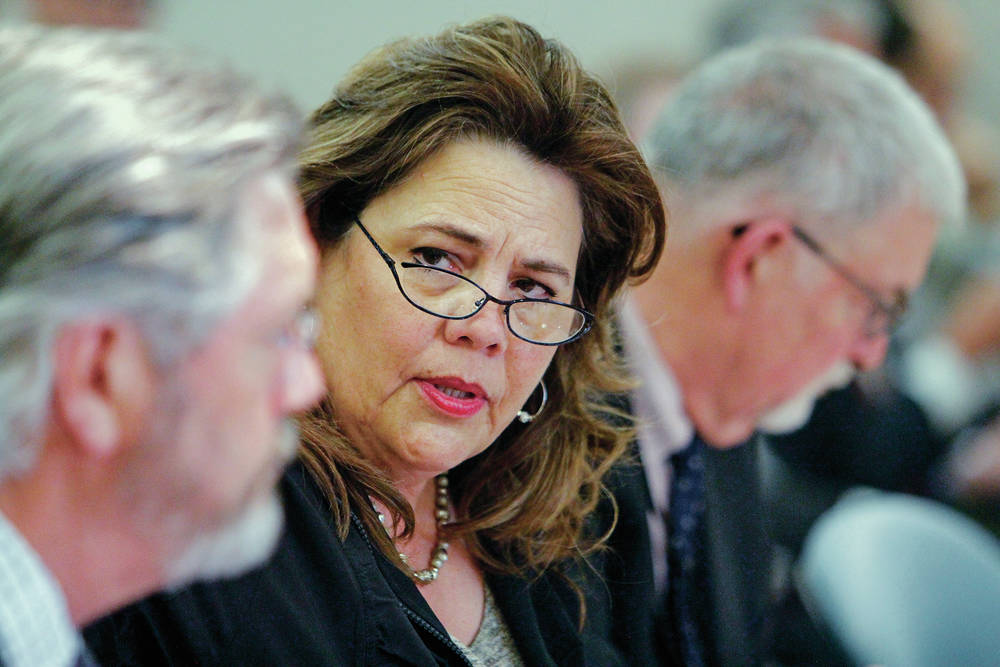 Hopes of capping the amount that storefront lenders in New Mexico can charge in interest and fees waned Monday after a powerful lawmaker’s attempt to close a loophole in the bill met with cool resistance.

House Bill 347 and a companion measure in the Senate represent the most significant movement in years by lawmakers to regulate an industry that consumer advocates say preys on poor people with annual rates that can climb as high as 9,000 percent on some loans.

By capping most annual percentage rates at 175 percent, the bills have won backing from lobbyists for many storefront lenders and some consumer advocates who view it as a palatable compromise.

But the proposal still prompted skepticism Monday in the House Judiciary Committee, which postponed a vote on the bill after House Speaker Brian Egolf asked the sponsors to eliminate an exception to the cap of 175 percent. This casts doubt on the proposal’s prospects as the legislative session enters its last 12 days.

Such loans are guaranteed by a borrower’s expected tax return. And though this type of loan is a relatively small share of the market for storefront lenders, interest rates for it would not be capped under House Bill 347. Instead, such loans would be regulated by a separate bill wending through the Legislature.

House Bill 347’s main sponsor, Rep. Patricia Lundstrom, D-Gallup, told the committee she would have to consult with groups working on the legislation before eliminating the exception to the 175 percent interest rate. Lundstrom’s stand signaled that some legislators and the storefront lending industry could pull their support for the bill.

Consumer advocates also raised concerns about a provision in the bill that would keep confidential the reports that lenders file with state regulators. The regulators would publish data about the total number of loans and average statewide interest rates.

Laurie Weahkee, of the Native American Voters Alliance, said information about lenders should be as accessible as possible to help consumers make informed decisions. Weahkee argued that lenders should have to disclose additional information, too, such as the number of vehicles seized through loans made against car titles.

“We really believe that we need the reporting to be accountable and transparent,” she told the committee.

Members of the committee said there is a need to impose some sort of a cap on interest rates, but many at the same time expressed hesitation about setting the limit at 175 percent.

At that rate, New Mexico’s plan pales in comparison to steps some other states have taken to rein in storefront lenders. The bills also contains language that some consumer advocates fear would shield the industry from closer scrutiny by the public.

Industry lobbyists and some lawmakers say reducing the cap any lower would hamper lenders from giving loans to people who are high risks to repay them. They say low-income New Mexicans would suffer by not having access to emergency cash or would turn to riskier options such as internet lenders.

“[This bill] will keep alive an industry that provides financing for people who can’t find financing through traditional means,” said Raymond Sanchez, a lobbyist for the Consumer Installment Loan Association. Sanchez is a former speaker of the New Mexico House.

But consumer advocates in other states that have imposed far lower caps dispute the suggestion that limiting or ultimately shutting down storefront lenders would backfire on the poor.

“It’s not a safety net,” said Hank Klein, who campaigned to end payday lending in Arkansas.

That state has a 17 percent cap written into its constitution for all small loans. Klein rejects the argument that lower caps will leave borrowers who have little or no credit without access to loans. He says high-interest loans only bury consumers in debt.

Consumer advocates in New Mexico pushed for a 36 percent cap earlier in the session only to see their proposals shot down in legislative committees.

In neighboring Arizona, which has ended payday lending, advocates say a low cap is the only way to stop predatory lenders.

Though Arizona has ended a decade-long experiment with payday lending, Kelly Griffiths, executive director of the Center for Economic Integrity in Tucson, says lenders have found loopholes or switched to selling different types of loans that come with triple-digit interest rates.

The answer, Griffiths said, is a 36 percent cap on all small loans rather than trying to regulate specific types of loans or allowing exceptions for certain financial products.

“That is your solution to predatory lending,” Griffiths said.

Consumer advocates across the country have pushed for a 36 percent interest rate cap on small loans. That number has a long history.

Good government groups initially touted the rate in the late 19th and early 20th centuries, when a black market for small loans was thriving amid the urbanization. They said an interest rate of 36 percent on small loans would be an appropriate exception to lower caps in state usury laws because it would allow legitimate lenders to make a profit while also ensuring that borrowers would not be trapped in debt.

The federal government has embraced the idea. Congress set a 36 percent cap on loans offered to members of the military and their families. The Federal Deposit Insurance Corporation has recommended lenders adopt the rate cap, too.

Some members of the House Judiciary Committee cited the federal government’s policies Monday in questioning why New Mexico should accept a much higher rate.

But other lawmakers cautioned that failing to act this year would leave consumers exposed to interest rates far higher than 175 percent.

Backers argue the law would still represent progress by banning loans shorter than four months and changing reporting requirements to include loans not previously tallied by state regulators. The measure also would create a fund to support financial literacy programs.

“Going another couple of years with nothing is the wrong thing to do,” Lundstrom said.