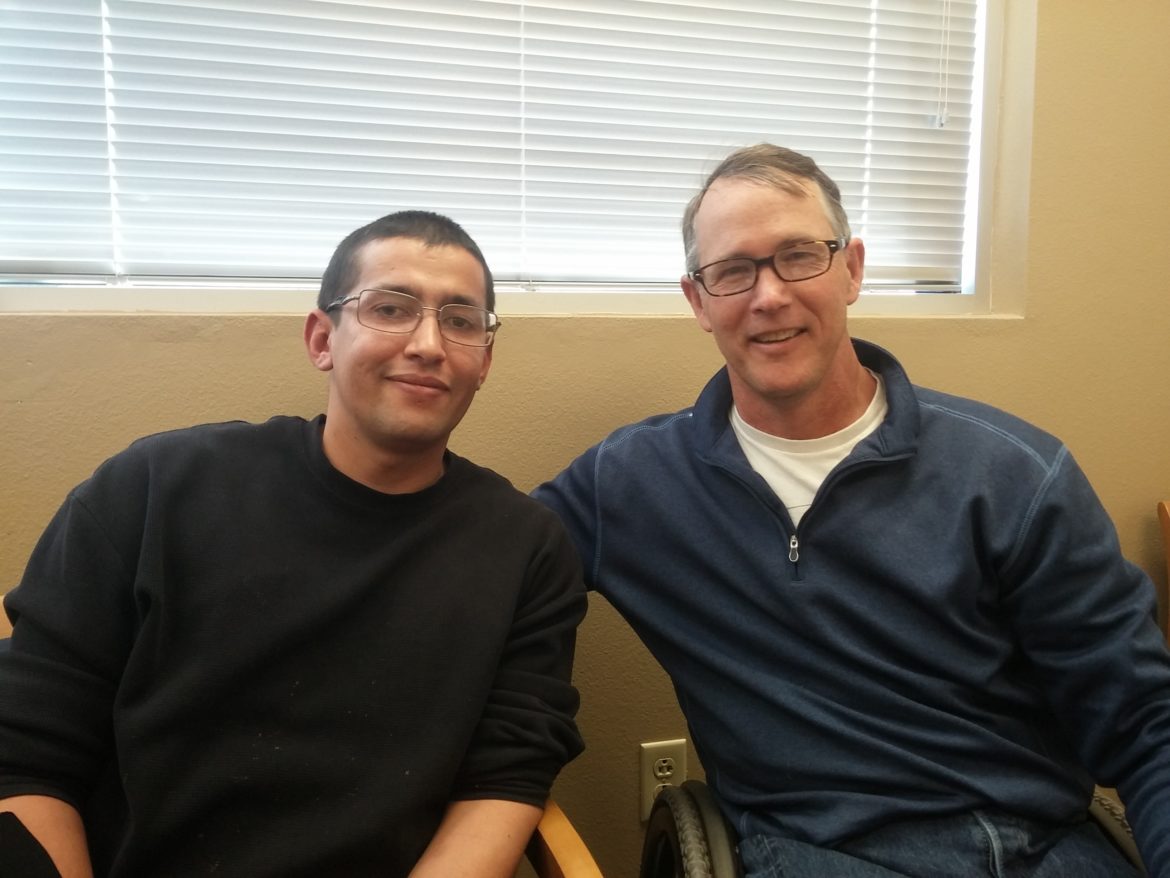 Lawrence Martinez says driving triggers him back to the dark days of dependency.

“Monday was my first day driving the car,” the Albuquerque father of four said last week, talking about the car he and his wife recently bought, as he sat in a conference room at Albuquerque’s Turning Point Recovery Center. “That was an issue on its own, but it’s working out now. Leaving the house, I get anxiety. Once I get on the road, it’s perfect.”

Martinez has been recovering from a methamphetamine addiction since last July. It was a problem he struggled on and off with for years. Martinez said that in October 2015, he was high on meth when another man violently attacked him and left him injured after a road rage incident. For the next nine months, Martinez said he remained holed up in his home, most of the time high on meth, paranoid that people were after him.

He said he’d constantly pack guns on him, wear bulletproof vests and order his three kids into the basement because he feared another attack.

“I thought people were out to kill me,” he said. “It wasn’t anything like that, but that’s what I thought from the methamphetamine use.”

Last summer, Martinez’s wife gave him an ultimatum: get clean or leave the family. Martinez checked himself into Turning Point, where he detoxed for seven days and then spent four months in intensive outpatient treatment, which consisted of nine hours a week of group therapy.

Now, Martinez is in an after care program, which he attends once a week for an hour and a half. Turning Point routinely gives him drug tests—Martinez: “It’s a sense of accountability”—and he sees a therapist regularly.

All of his treatment, which the exception of the detox, is paid through Medicaid, the federal health insurance program for the poor.

Martinez’s family first obtained Medicaid in 2014, the year that a vast expansion of Medicaid went into effect under provisions in the federal Affordable Care Act (ACA), commonly called Obamacare. Now, the future of the ACA and Medicaid expansion are up in the air.

President Donald Trump and congressional Republicans have vowed to repeal and replace the ACA. On Monday, Republicans in the the Energy and Commerce Committee released their replacement plan. Among many other things, the Republican plan would drop the ACA’s individual mandate and replace it with letting insurance companies charge a 30 percent fee on those who buy insurance after a period of not having insurance.

Democrats in Washington D.C. oppose the idea of a repeal, and some GOP governors are even pushing to preserve the Medicaid expansion. Gov. Susana Martinez chose to expand Medicaid in the state in 2013, but has repeatedly expressed opposition to the ACA, most recently to reporters earlier this month after a meeting with in Washington D.C. with the Trump administration.

For now, the future of programs like those that help Lawrence Martinez is very much uncertain.

“If they do take that stuff away, it’s guys like Lawrence who are going to be affected,” Paul Tucker, who runs Turning Point, said.

When Lawrence Martinez reflected on the first day he checked into treatment last summer, he sighed in relief.

“Having all these issues in my head [and] thinking that everybody’s out to kill me, coming here was the best feeling I’ve ever had,” he said. “This is the most comfortable, safest place I’ve felt.”

The potential federal overhaul won’t only affect patients like Lawrence Martinez. It may also hurt recovery center owners like Tucker.

Tucker opened an entire new treatment center, Focus Recovery, in 2014 in anticipation of new patients covered by the Medicaid expansion. Since the expansion went into effect that year, Tucker said that  patients active in recovery at all of Turning Point’s facilities increased from about 20 to 70 people.

Other recovery centers in Albuquerque have seen even larger increases in their rolls since the Medicaid expansion. James Widner, CEO of Duke City Recovery, said his organization went from roughly 300 patients in 2012 and 2013 to  920 patients now, most of whom are covered from Medicaid.

“What we’ve seen in the last five years has been an absolute explosion in the number of patients that have been able to get into treatment,” Baldwin said. “The reason for that is simple economics: There’s more patients that have an ability to pay with Medicaid.”

New Mexico’s Medicaid expansion under the ACA applies to people and households with income of up to 138 percent of the federal poverty level. That equals a $16,500 yearly income for individuals and a $33,500 income for a family of four. Before the expansion, New Mexicans had to live on an income equal to the federal poverty level to qualify for Medicaid, according to Harris Silver, who co-chairs the Bernalillo County Opioid Accountability Initiative. That’s currently just $12,060 for an individual or $24,600 for a family of four.

“It’s going to be hugely detrimental if the whole thing gets repealed,” Silver said.

Under the Republican proposal, people can enroll until 2020 in Medicaid in states that expanded the program according to NPR, and the federal government will still pay for most of these beneficiaries health care costs.

The federal government pays 90 percent of the cost of those covered through the expanded Medicaid.

Four Republicans in the Senate said they would have reservations about a plan that does “not provide stability and certainty for individuals and families in Medicaid expansion programs or the necessary flexibility for states.”

With a narrow majority in the chamber, four defectors on a plan would be enough to defeat the plan.

In states like New Mexico, where the poverty rate ranks second-worst in the nation at more than 20 percent of the population—nearly six percentage points greater than the national average—the Medicaid expansion has had a lopsided effect. The expansion added roughly 240,000 people in the state to Medicaid, which by June will cover about 922,000 residents or 44 percent of the population, according to the state Health and Human Services Department.

“Almost half of the state is on Medicaid,” Tucker said. “So it’s going to affect us disproportionately.”

Having these provisions in the law is essential, advocates argue, because otherwise health insurance companies won’t treat mental health or drug addiction. Long-term drug treatment is costly for providers because patients tend to have more medical needs, Tucker said, especially in New Mexico, where drug addiction can often be a generational problem. Drug patients also often relapse, making their recovery a long-term expense for insurance companies.

according to Bill Weiss, another co-chair of the Bernalillo County Opioid Accountability Initiative. For providers, drug treatment patients are not always “warm and fuzzy” people and usually have histories with law enforcement, requiring dedication also from providers willing to treat them, he said.

“So if you suddenly repeal the Affordable Care Act, that requirement evaporates,” Weiss said.

But other providers are warning patients and families not to panic amid the uncertainty of the ACA.

“I’m just waiting for all the dust to settle to see what’s going to happen,” Duke City Recovery’s Widner said. “I think a lot of people are being reactionary right now.”

Not all costs covered

Even now, Medicaid doesn’t cover all aspects of addiction treatment. Several providers and advocates interviewed for this story say that Medicaid in the state does not cover detoxing, a critical first step toward recovery.

Medicaid’s lack of coverage for detox in New Mexico is a position with which state Human Services Department Secretary Brent Earnest may disagree, according to multiple people interviewed for this story, though a spokesman for the agency did not respond to phone calls and emailed questions from NM Political Report for this story.

According to Tucker, Medicaid in New Mexico will only cover detox if it’s tied to another major medical condition, like liver disease. At Turning Point, patients in detox pay $500 out of pocket for the treatment, he said. Lawrence Martinez was among those who was able to do so.

“My family and some of my friends paid for it, which was pretty great,” he said.

It’s one of the difficulties that still make the drug dependent population in New Mexico grossly underserved, Weiss said, despite the gains in recent years.

“We have literally tens of thousands of people who have opioid dependency that should be treated,” Weiss said.

He and other advocates argue that investing more money now into drug treatment will yield big savings and economic development in the future. Tucker cites Lawrence Martinez as an example, pointing to the car that his wife bought earlier this month.

“Lawrence has his family, has his life back. He brings his kids around,” Tucker said. “None of that would have happened if he hadn’t gotten clean.”

Lawrence Martinez, for his part, said staying clean takes “a lot of hard work and dedication.” Without the last eight months of treatment and the health insurance to pay for it, Lawrence Martinez said he had only two other options: prison or death.