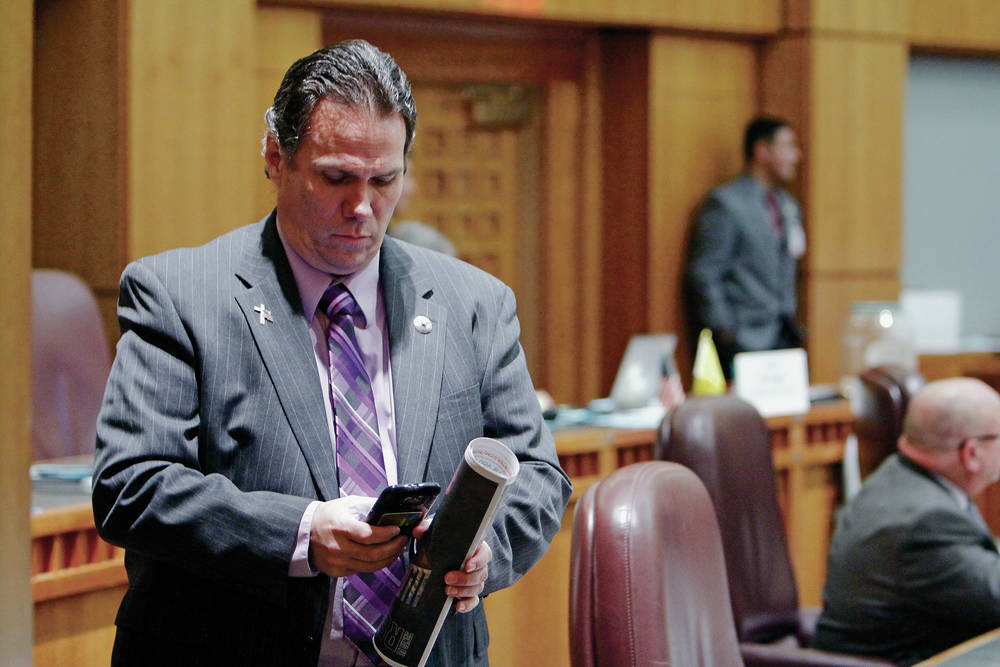 State Sen. Craig Brandt, R-Rio Rancho, shown Friday on the Senate floor, has started the process of trying to override the governor's veto of a bill that would allow teachers to take up to 10 days of sick leave without facing penalties on their state evaluations.

A Republican legislator on Friday began his attempt to override Gov. Susana Martinez’s veto of a bill that would enable teachers to use more sick days without being penalized in their performance evaluation.

Sen. Craig Brandt, R-Rio Rancho, moved to have the vetoed bill returned to the Senate so he could seek an override early next week.

Martinez is also a Republican, but Brandt said he would continue pursuing the override unless they can reach a compromise in which teachers are not penalized. He said he had initiated conversations with Martinez’s Public Education Department in hopes of starting such a discussion.

“I don’t take any joy in overriding a veto,” Brandt said.

Martinez’s spokesman, Michael Lonergan, referenced the governor’s veto message when asked about the possibility of a compromise with Brandt.

In part, Martinez said: “I would welcome a bill that considers reasonable changes to attendance measures as part of an effective, comprehensive teacher evaluation system. However, the Legislature continually refused to engage despite the Public Education Department’s repeated good-faith attempts to meet teachers and teachers’ unions halfway.”

Brandt and other legislators overwhelmingly approved House Bill 241, which would have amended the evaluation system in which teachers can use three or fewer sick days in an academic year without being downgraded on their job evaluation. The bill would have allowed a teacher to take up to 10 sick days with no penalty.

The House of Representatives approved the bill 64-3, and the Senate voted for it 39-0.

Brandt said his procedural maneuver to start an override of Martinez’s veto allows time for constituents to call their legislators, especially House members.

The 42-member Senate probably could get the two-thirds majority to override Martinez’s veto. Twenty-six Democrats are in the Senate. If they closed ranks, only Brandt and one other Republican would be needed to reach the threshold of 28 for an override.

Overriding Martinez’s veto would be far more difficult in the House, where Democrats have a 38-32 advantage. That’s because House Republicans are typically a loyal voting bloc for Martinez. They are less likely to break ranks and join with Democrats, even if it’s to revive a bill they supported.

Of House members, Brandt said, “They’re not ready to make a commitment at this point.”

Charles Bowyer, executive director of the National Education Association-New Mexico, said his union and its teachers are asking legislators to override Martinez’s veto.

“The veto is inhumane, hurting both students and educators,” Bowyer said.

Martinez, though, stated in her veto message that teacher attendance has improved since the evaluation system was established by her administration nearly five years ago.

Martinez also said the bill legislators approved would have negative consequences on classrooms. She said it would increase costs for substitutes because teachers would be absent more often, depriving students of their expertise.