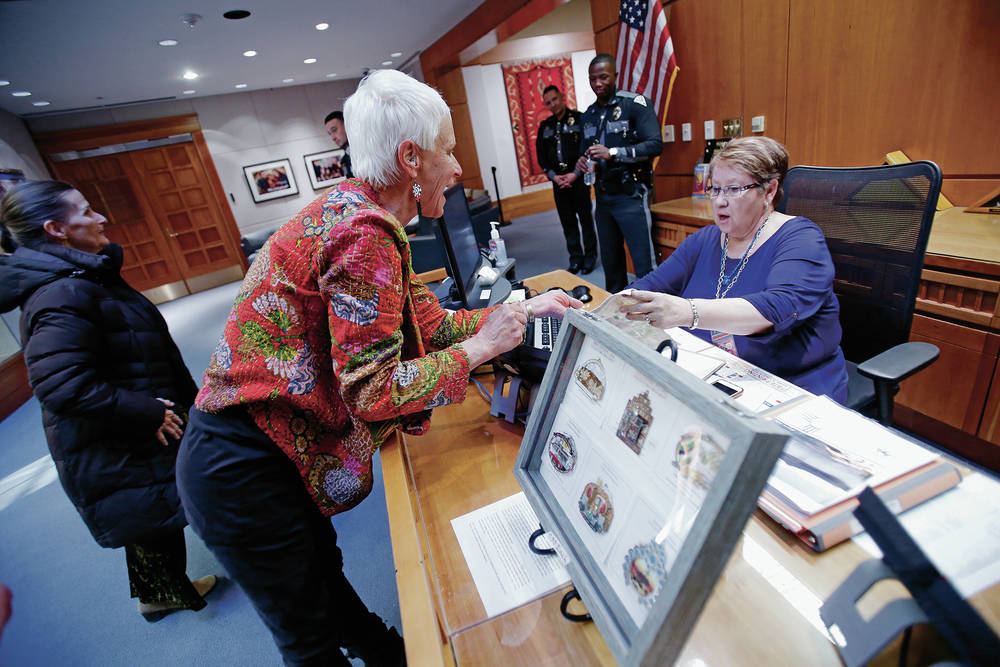 Bobbe Besold of Santa Fe, a member of the group Song Carriers Women's Circle, hands a piece of hemp fabric to Fran Lucero, assistant to the chief of staff, to deliver to the governor on Monday, March 13, 2017, after the group performed a Lithuanian song about the cultivation of hemp entitled "Kanapi Kanapeli." The group was there to show support for bills authorizing research into hemp production in New Mexico.

Two days after Gov. Susana Martinez vetoed a bill that would have established a research program for industrial hemp, the proposal is back — this time put forth by a high-ranking member of her own party.

House Minority Leader Nate Gentry, R-Albuquerque, is sponsoring the revived hemp measure, House Bill 530. He took a blank bill that had been introduced earlier, then added the latest hemp initiative to it.

Gentry’s bill for industrial hemp research on Monday cleared the House Labor and Economic Development Committee on a bipartisan 8-0 vote.

Gentry said he sat down with the governor’s administration before introducing the bill to “work out some minor details that brought us more in compliance with federal law.”

Martinez without explanation vetoed an industrial hemp bill on Saturday that was sponsored by Sen. Cisco McSorley, D-Albuquerque. McSorley was weighing whether to try to override her veto when Martinez opened the door for a replacement bill.

“I’m glad she’s seen the light,” McSorley said of the governor, who also vetoed his industrial hemp bill in 2015.

McSorley said Gentry had changed only a few words in his bill. But, McSorley said, he was concerned that the adjustment might preclude farmers in New Mexico from eventually turning hemp into a cash crop.

“The House bill is so restrictive that it won’t create the kind of jobs we are hoping to create,” McSorley said.

Gentry said he had heard that concern.

The group Song Carriers Women’s Circle perform a Lithuanian song about the cultivation of hemp entitled “Kanapi Kanapeli” in the lobby of the governor’s office at the state Capitol on Monday, March 13, 2017. The group was there to show support for bills authorizing research into hemp production in New Mexico.

“The goal is to, if nothing else this session, get a foot in the door,” Gentry said. “I think we have something everyone is in agreement with.”

Congress in 2014 approved a farm bill that removed hemp from the Controlled Substances Act when grown for research purposes. Thirty-two states have since approved similar legislation on industrial hemp. Neighboring Colorado is the nation’s leader in hemp production.

McSorley said Martinez’s veto put New Mexico in danger of missing a business opportunity. Hemp is used to make everything from carpet to clothing to auto dashboards.

The changes that Gentry and the governor’s staff have made to the resurrected bill are largely semantic, clarifying that the measure would allow for research-focused hemp production.

“The changes were made to make sure it was a research development program with agriculture,” Rep. Rick Little, R-Chaparral, said in Monday’s committee hearing. “What this is, is almost the same bill. We have, I believe, an agreement with the fourth floor [the governor’s office].”

Earlier this session, Martinez also vetoed a hemp bill that Little had sponsored with two other representatives. Their proposal was more sweeping than McSorley’s, removing hemp from the list of prohibited drugs. In contrast, McSorley modeled his proposal after the federal Farm Bill.

McSorley said he wrote to Martinez a number of times in hopes of working with her on a hemp bill that she would embrace. He said she never responded to his letters.

“We’ve been working on this bill for six years,” McSorley said. “If she had worked with us six years ago, this bill could have been passed long ago and farmers and ranchers would be well on their way to economic stability.”

Martinez’s spokesman, Chris Sanchez, said “the governor is always willing to work with lawmakers toward compromise.” He declined to answer any questions about the bill.

The legislative session ends at noon Saturday, so Gentry’s bill is likely to be on a fast track for passage in the House of Representatives and then the Senate, especially because Martinez now appears to be on board.

Related: NM falling behind other states on hemp

The governor’s veto of McSorley’s hemp bill generated a colorful protest Monday. Locals who believe the plant would be good for the economy gathered outside Martinez’s office in the Capitol to perform a Lithuanian folk song about hemp production.

One point they hoped to make was that, although hemp is similar to marijuana in look and scent, it has little of the intoxicating compound THC. In addition, they said, hemp is a low-water, drought-resistant crop that could be a moneymaker for the state’s farmers.

“It’s just a plant that is great for making fibers and more than that,” said John Meade, a self-described citizen lobbyist who organized the singing protest. “I’d love to see New Mexico take the lead in approving the cultivation of hemp.”

Martinez was not around for the protest. Sanchez said she was speaking at an event in Austin, Texas.

Sami Edge can be reached at sedge@sfnewmexican.com.