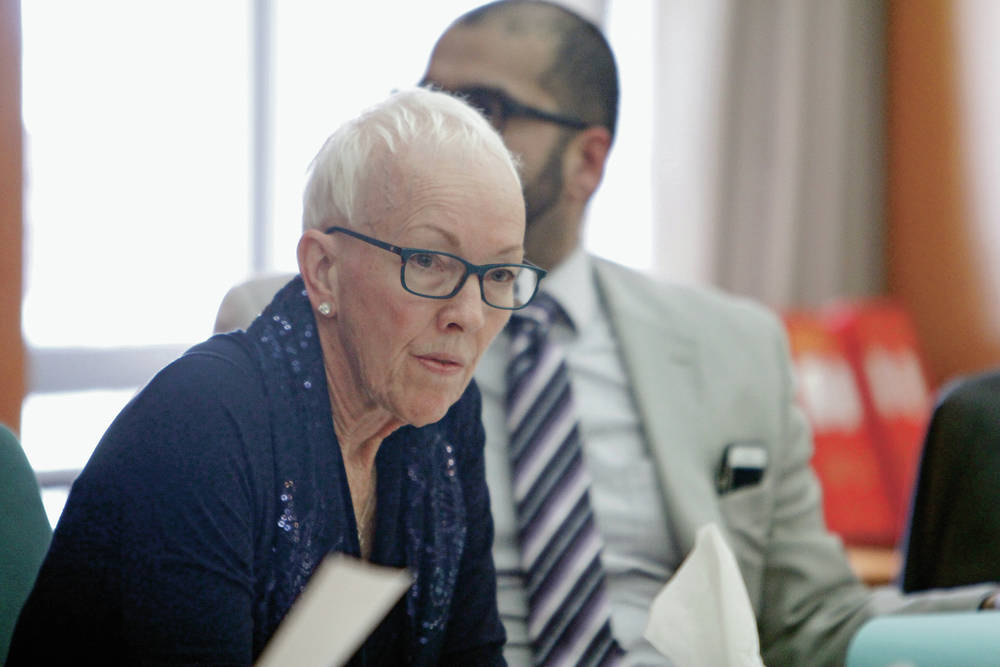 A legislative committee on Monday effectively killed a bill to expand background checks for gun purchases — an issue that drew large crowds to the Capitol as well as big campaign contributions and intense lobbying and advertising.

The House Judiciary Committee voted 7-6 to table House Bill 548 after a lengthy hearing. It marked the defeat of the most recent gun-control bill sponsored by Rep. Stephanie Garcia Richard, D-Los Alamos.

Democrat Eliseo Alcon of Milan joined the six Republicans on the panel to stop the measure, which would have required background checks on all sales of firearms at gun shows and from advertisements on the internet or print publications.

At a meeting Monday of the House Judiciary Committee, Sierra County Sherif Glenn Hamilton speaks against a bill that would require a person subject to a restraining order to surrender firearms.

The main difference between the two bills, Garcia Richard said, is that the new proposal didn’t cover temporary transfers of guns. “The intent is to get to stranger-to-stranger sales,” she told the committee Monday. “I said from the beginning I wanted to strike a balance between public safety and convenience.”

Only licensed firearms dealers are required to conduct background checks.

But the changes she made did little to quell opposition.

John Sugg, district attorney of Lincoln and Otero counties, told the Judiciary Committee that Garcia Richard’s intent is legitimate but the bill would be unenforceable.

Rep. Matthew McQueen, D-Galisteo, challenged that claim. “The first thing you do when you arrest someone for a violent crime is ask them where they got the gun,” he said.

House Minority Leader Nate Gentry, R-Albuquerque, voted for a bill in 2013 that would have expanded background checks, saying that he and other Republicans who supported it took much heat. But of HB 548, he said, “If I thought this was something that would work, I’d support it.”

The 2013 bill, which passed the House with bipartisan support, died in the Senate. That bill was inspired by the mass killings at Sandy Hook Elementary School in Connecticut. It was the last serious attempt New Mexico legislators made to expand background checks for firearm sales.

State District Court Judge Sylvia LaMar speaks in support of a bill that would require a person subject to a restraining order to surrender firearms.

Like Sugg, Gentry said he prefers another bill going through the Legislature that would increase penalties on felons possessing firearms. This is HB 17, sponsored by Rep. Bill Rehm, R-Albuquerque. It cleared the House and is awaiting a hearing in the Senate Judiciary Committee.

Opponents of Garcia Richard’s latest bill complained that it lacked transparency It started as a “dummy bill” — a blank sheet so content could be added belatedly. The title of the legislation is generic, saying it’s for the “public peace, health, safety and welfare” without any mention of guns or background checks. In addition, neither the bill nor a report about its financial impact was available on the Legislature’s website.

Still another bill on background checks is alive in the Senate. That is Senate Bill 48, sponsored by Sen. Richard Martinez, D-Española. It has been awaiting a hearing in the Senate Judiciary Committee — which is chaired by Martinez — since Jan. 31. Even if it somehow passed the Senate in this last week of the legislative session, it probably wouldn’t make it through the House Judiciary Committee after Monday’s defeat of a similar bill.

The committee’s action was a blow to gun-control groups such as New Mexicans to Prevent Gun Violence and the New York-based Everytown for Gun Safety. They argued that Garcia Richard’s measure would close a loophole that allows untold numbers of people to acquire guns without background checks.

The lobbyist for Everytown, which is chaired by media mogul and former New York City Mayor Michael Bloomberg, was the biggest single campaign contributor in New Mexico last year, giving more than $219,000 to politicians and political action committees.

In contrast, the National Rifle Association spent only about $10,000 on New Mexico candidates last year. But the organization last month poured $44,377 into an internet ad blitz opposing the background check bills. That’s the largest lobbyist expenditure reported so far during the session.

Sen. Joseph Cervantes, D-Las Cruces, explains a bill that would require a person subject to a restraining order to surrender firearms.

The House Judiciary committee also acted on another gun-control measure Monday, voting 9-4 to recommend Senate Bill 259, sponsored by Sen. Joseph Cervantes, D-Las Cruces. His proposal would require someone who is the subject of a restraining order to relinquish any guns. It also prohibits that person from buying or obtaining any other guns as long as the order is in effect.

People under such an order would have to deliver their firearms to someone who is not prohibited from possessing a firearm by state or federal law. All Democrats present voted for the measure, as did two Republicans, Gentry and Rep. Jim Dines of Albuquerque.