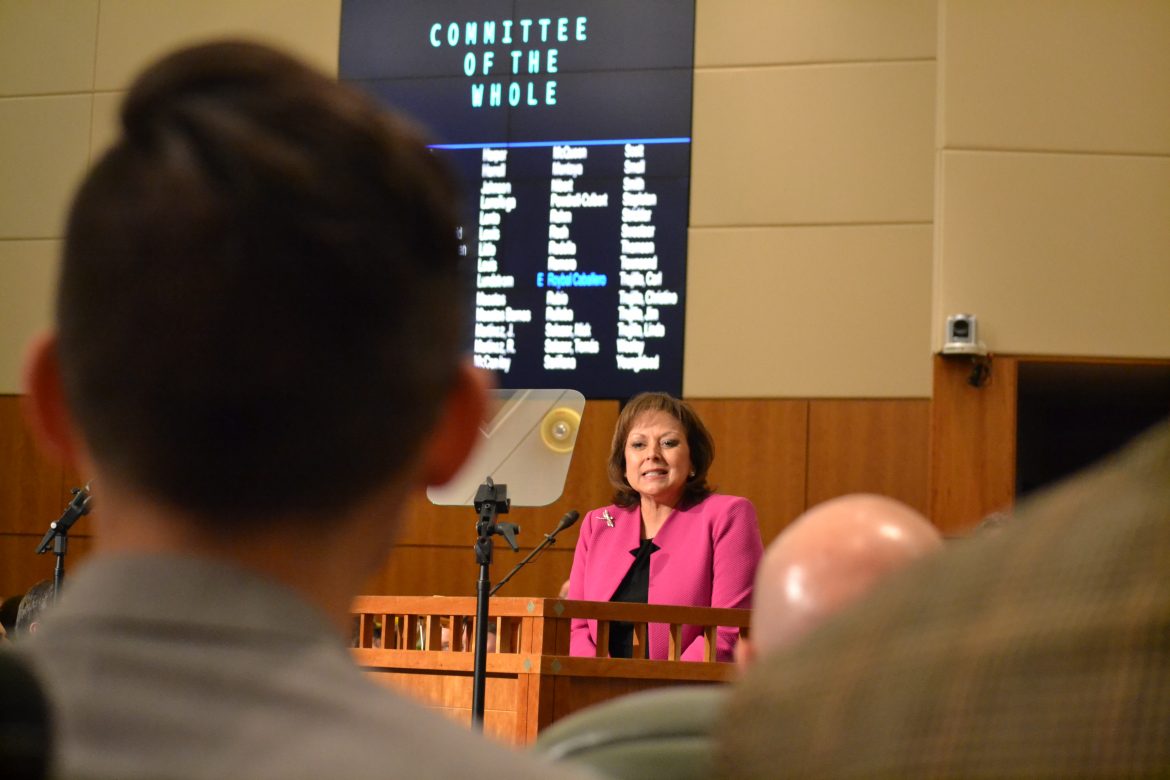 Gov. Susana Martinez delivering the 2017 State of the State Address.

Gov. Susana Martinez vetoed two bills Tuesday that passed the Legislature with overwhelming support, including legislation that would have allowed high school students to count computer science classes toward math and science credits needed for graduation.

The second vetoed bill would have made what appeared to be a minor change to state law dealing with tax increment development districts. Such districts are formed by local governments as a means to finance public infrastructure, like streets and utilities, for new development

Martinez did not provide explanation in her veto messages to legislators.

House Bill 230 allows horse-racing tracks that are combined with casinos, known as “racinos,” to change the number of days it hosts races each week.

Martinez also signed House Bill 162, a direct response to concerns about alcoholism in McKinley County and the city of Gallup. The bill gives those local governments the option to cut the hours that stores can sell alcoholic beverages in their jurisdictions.

Backers of the bill to allow high school students to get math and science credit for computer classes said Martinez’s veto of Senate Bill 134 is a setback to economic development and efforts to diversify the tech industry’s ranks. The backers included a mix of business groups and liberal Democrats.

Paige Prescott, president of the Computer Science Teachers Association of New Mexico, told a Senate committee last month the measure would give students an incentive to take computer science classes. In turn, she argued, more New Mexico students would be better equipped with tech skills that are in demand.

“This legislation was intended to help develop the talent pipeline for New Mexico’s emerging high-tech industries, as well as to create a 21st century workforce in the state,” Jason Espinoza, president and CEO of the Association of Commerce and Industry, said Tuesday.

Backers also argued the measure would make college degrees and professional careers in computer sciences accessible to a broader range of students.

“This program is one of the best things we can do to get girls in a field dominated by men,” Rep. Bill McCamley, a Democrat from Mesilla Park and a co-sponsor, told the House shortly after receiving news of the veto.

The bill would not have required school districts to offer computer science courses as credits towards graduation. The state Public Education Department would have had to develop standards for such courses and the credits could only be counted toward graduation for students entering high school. It would not have affected students already in high school.

A spokesman for the governor did not respond to a request for comment about the veto.

Martinez also shot down an arcane piece of legislation that would have required governments to inform their county treasurer whenever a tax increment development district is formed. Sponsored by Sen. Nancy Rodriguez, D-Santa Fe, Senate Bill 67 seemed to be a matter of housekeeping.

Governments must already inform the local county clerk and assessor whenever a tax district is created. An analysis by legislative staff said the addition of county treasurers to that list seemed appropriate. The bill was not expected to have any cost to the state.

The reasoning behind the two vetoes left some lawmakers scratching their heads. The governor has not hesitated to nix legislation this session of the Legislature, even bipartisan bills that are generally popular.

“My only question is why,” McCamley said.

Correction: A previous version of this story referred to the computer science bill as House Bill 134. It is actually Senate Bill 134.